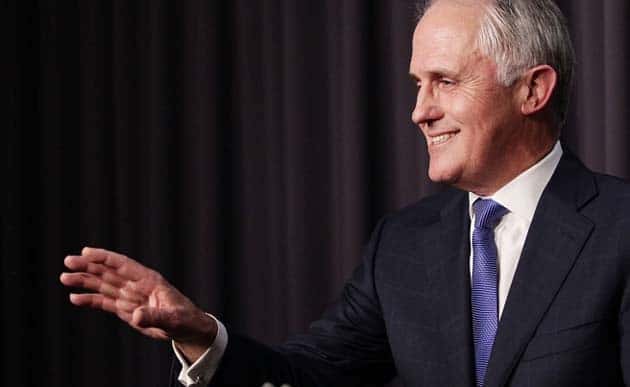 Just two years into his term as Prime Minister, Tony Abbott has been toppled by his own party. This is cause for celebration for all those disgusted with his cuts, racism and anti-worker policies.

Abbott’s savage budget cuts and his right-wing extremism destroyed his credibility. His conservatism over same-sex marriage, dismissal of remote Aboriginal communities as a “lifestyle choice”, his culture war on the ABC and his open attacks on Muslim leaders all put him deeply at odds with public attitudes.

New Prime Minister Malcolm Turnbull has an image as more moderate on issues like climate change and same-sex marriage. But he is no progressive.

He has already ruled out any significant changes. Turnbull is not about to rock the Liberal boat, and the Liberal Party parliamentary caucus is dominated by the hard right. He knows he has to avoid antagonising the Liberal backbench in order to hold onto power. Having lost the leadership once, following a revolt by Liberal MPs against his negotiations with Labor on emissions trading, Turnbull is not going to make the same mistake again.

Turnbull is a committed neo-liberal, who presents himself as the man capable of delivering what big business wants, in typical Liberal Party fashion. Senior corporate executives are “ecstatic” about Turnbull’s win, according to the Financial Review.

Turnbull says he can provide “economic leadership” and a government that “makes a case” for economic reform. In other words, he believes he can sell budget cuts and attacks on workers and the poor in a way Tony Abbott could not.

Abbott’s efforts to force through attacks on Medicare, universities, the unemployed and pensioners in his first budget were rejected in a wave of public protest and opposition. Turnbull was part of this all the way through.

Turnbull told the media he would be looking to imitate the efforts of New Zealand’s conservative Prime Minister, saying, “John Key has been able to achieve very significant economic reforms in New Zealand by…explaining complex issues and then making the case for them”. Key has increased the GST, cut income tax for the wealthy and made it easier to sack workers.

This should be no surprise. Turnbull is a multi-millionaire businessman himself, with a fortune estimated at $186 million. As Liberal elder Arthur Sinodinos pointed out earlier this year, “The fact of the matter is, Turnbull is a capitalist. He believes in market principles.”

We should not expect any change over refugees, climate change or same-sex marriage either. Turnbull told the Liberal party room he would stick with Abbott’s plan to hold a plebiscite on same-sex marriage, a ploy designed to delay the prospect of marriage equality for as long as possible.

He said Abbott’s ridiculed pro-business Direct Action climate policy was, “one that I supported as a Minister in the Abbott Government and it’s one that I support today” and “a very, very good piece of work”. His Deputy Julie Bishop made it clear there will be no review of the emissions reduction targets the government is taking to the Paris climate conference at the end of this year, and Turnbull has also ruled out any shift to an emissions trading scheme.

Turnbull has an appalling record on refugees from his previous stint as Liberal leader, when he sought to score political points through spreading hysteria about refugee boat arrivals. He pledged to reintroduce Temporary Protection Visas, saying Australia had become a “soft target” for people smugglers. And in words that could have come from the mouth of Tony Abbott, he declared in 2009 that, “Only a Turnbull government can stop the boats and secure our borders.”

Just last week he was among government ministers advocating the moves to discriminate against Muslim refugees from Syria, through giving priority to Christian refugees.

Labor Leader Bill Shorten is now under serious pressure. It is only the public’s hatred for Tony Abbott that has pushed Labor up in the polls. Shorten’s rhetoric about the need to restore business “confidence” echoes the kind of pro-business language used by Turnbull. Labor shares the same basic approach to the budget and economic management as the Liberals.

It’s likely Malcolm Turnbull will enjoy a brief honeymoon as leader while people wait to see his first moves. But there is already pressure from big business for the Liberals to get on with “economic reform”.

Any efforts to deal with the budget deficit will mean either higher taxes for ordinary people or cuts to services and living standards. There is already a clamour from state Liberal Premiers like Mike Baird to increase the GST.

Unions fighting cuts and the grassroots campaigns around refugees, same-sex marriage and climate change will need to fight Turnbull every bit as hard as Abbott.