A small protest that began with 50 people in Gezi Park, Istanbul, to save it from becoming a shopping mall, became the spark for weeks of resistance against Turkey’s Prime Minister, Tayyip Erdoğan.

From 1 June, not only the park by the symbolic Taksim Square (the site of a massacre on May Day 1977) witnessed the brave resistance of tens of thousands of people against police violence.

Protests quickly spread to Turkey’s other major cities. Despite Kurdish hesitation that the nationalist opposition Republican People’s Party (CHP) could become a beneficiary of the movement, the main Kurdish cities in the country’s east have also seen mass protests. Not surprisingly, the repression meted out there has often been the most severe.

On 11 June, riot police used rubber bullets and tear gas to eject protesters from Taksim Square. Yet within 12 hours, thousands of people had poured in to take it back. 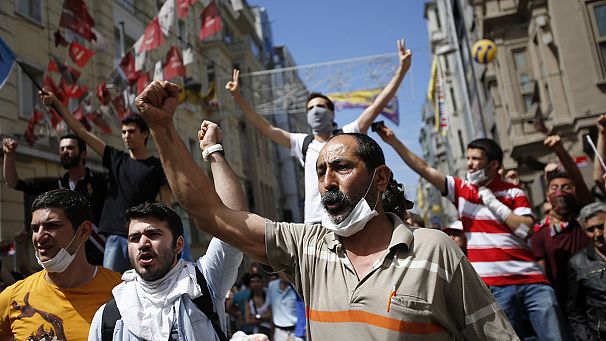 Erdoğan has backed away from plans for a shopping mall in Gezi Park, though he remains stubbornly committed to building a replica of an old Ottoman barracks there.

As Solidarity went to press the government was talking of holding a referendum over the future of Gezi Park in the hope of ending the protests, while also promising further tough action if they continue.

But the protests have become about more than a park. The government will find it difficult to put this genie—a wide movement spearheaded by the young, seething about social and economic issues—back into its bottle. Faced with growing income inequality in Turkey, they don’t see the booming economy that Erdoğan speaks of. And every time they express their grievances, they have been teargassed and persecuted.

The movement has exposed the limits of Turkey’s parliamentary democracy and the growing authoritarianism of a regime held up as a “model” for Egypt, Tunisia and other “Arab Spring” countries.

While Turkey’s state-controlled media tried to ignore the protests, much of the Western media has portrayed the revolt as a secular one opposed to the Islamic politics of Erdoğan’s AKP party.

But the picture on the ground is not so simple. Zeyno Üstün, a demonstrator who occupied Gezi Park from the outset, told The Nation: “Sure, there are hardcore secularists in the crowds. But there are also feminists, LGBT activists, anarchists, socialists of various stripes, Kurdish movement leaders, unionised workers, architects and urban planners, soccer hooligans, environmentalists, and people who are protesting for the first time!”

In addition, left-wing Muslims and even some supporters of Erdogan’s party have been present.

Since coming to power in 2002, Erdoğan has been seen as a reformer popular with not only his Muslim constituency, but also with many liberals who applauded his standing up to the military. The military has been the real power in Turkey since the country’s foundation, staging four coups since the Second World War, the most recent in 1980.

It has been the backbone of the so-called “Turkish deep state”, a shadowy network of secular-nationalists who span the intelligence apparatus, military leaders, the judiciary, and organised crime. Secular-nationalism has repeatedly been used to justify the military’s active intervention into politics.

However the AKP government is also totally committed to neo-liberalism. And since its second electoral victory in 2007, it has itself brutally repressed dissent. As a US-based Turkish socialist put it: “May Day demonstrators, striking workers, student protesters on almost every single college campus in the country, community organisations opposing evictions and, of course, Kurdish activists are often brutalised by the riot police during peaceful demonstrations. What’s more, Turkey’s prisons are full of political prisoners: students, journalists, unionists and community activists, all waiting for their day in court.”

But the AKP still has a large support base—50 per cent of the electorate. Erdoğan himself realises this, and has started calling his own rallies in many cities to consolidate his support base. Winning more of them over to the side of the protests is an important task.

Ozan Tekin from Solidarity’s sister organisation, the Revolutionary Socialist Workers Party (DSİP), told Ahram Online, “Some opinion polls indicate that 16 per cent of AKP supporters are sympathetic to the resistance—that is a good starting point.”

However in some places, secular-nationalists have tried to hijack the movement, physically attacking Kurds and other minorities.

The active involvement of the organised workers’ movement will be a crucial counterweight. A two day strike by public sector unions was co-ordinated with anti-government demonstrations on 4-5 June. A steelworkers strike is proposed for later in June. Such action can ensure that it is the victims of Erdoğan’s neo-liberal policies, not the nationalists, who gain from the movement.

Hitchens on trial: Islam, religion and the left

Who’s who in Syria’s revolution?