Stop the Liberals’ attacks on people with disability 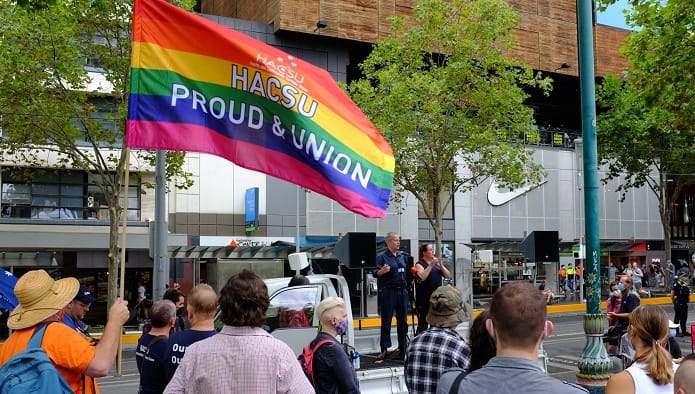 Shadow NDIS Minister Bill Shorten, who spoke at the rally, described IAs as a “king hit on the NDIS”. Other speakers included the leader of the Victorian Greens, Sam Ratnam, and the secretary of the Health and Community Services Union, Paul Healey.

Concern in the Coalition government and the NDIA, the agency that runs the NDIS, about the growing costs of the NDIS has led to the cutting of NDIS participants’ budgets in the name of “scheme sustainability”.

This year the government plans to introduce changes to the NDIS that will restrict the range and amount of supports disabled people can access through NDIS funding. IAs are a central plank in this austerity agenda.

From the middle of this year all new applicants to the NDIS will have to undergo an independent assessment which will determine the budget in their NDIS plan. From the end of the year all existing NDIS participants will have to do an IA. IA results will not be subject to review because they will no longer be a decision of the NDIA.

The government and NDIA claim that free IAs are necessary to address inequities in the current system. The latest NDIA Quarterly Report states that children from wealthier families receive payments 23 per cent higher than the poorest, with a gap of 13 per cent for adults.

This, along with the significant costs that people have to pay to access good quality evidence to support their applications for the NDIS, is a real problem. But IAs aren’t the way to fix it.

IAs are a blunt tool that will fail to capture the complexity and nuances of many people’s disabilities. Independent assessors will be strangers who, given the dire shortage of qualified allied health professionals, are unlikely to have a thorough understanding of the disabilities they are assessing.

The Fairer NDIS for All campaign is demanding changes that go further than just stopping IAs: scrapping the staffing cap at the NDIA, which leads to long delays in the approval of vital goods and services; expanding public disability services; and improving the wages and conditions of the disability workforce.

As Bri Aldersea from Fairer NDIS for All told the rally, “When you hear stories about support workers leaving their clients because they can’t live off a support workers’ wage – does this not sound like a broken system? Where the race to the bottom for wages means a loss in the quality of support?”

By an ASU member