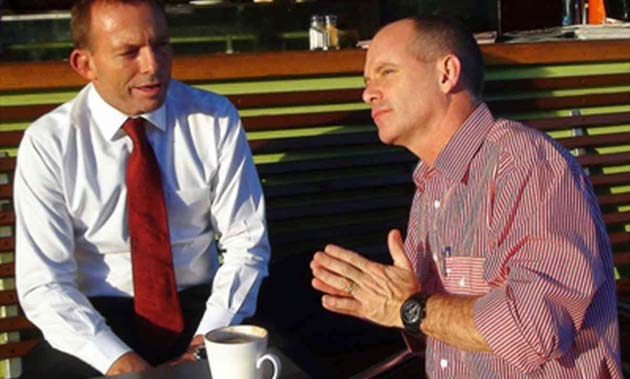 It was an astonishing result. Despite their enormous majority in the Queensland parliament, Campbell Newman and the LNP have followed the Victorian Liberal government to be thrown out of office after just one term.

The Queensland result was also a devastating blow to Tony Abbott and talk of a move against him is now everywhere. Speaking on the ABC’s election night coverage, Federal Liberal National MP Jane Prentice pointedly refused to defend him, responding to questions on Abbott’s future by saying, “Well, that’s a discussion, isn’t it? We need to look at where we’re going”.

The anger against Abbott was an important factor in the Queensland result. On top of the opposition to his budget measures, the debacle over knighting Prince Philip took over the final week of the campaign.

Campbell Newman always looked in trouble, and it wasn’t long into election night before it was clear he had lost his seat of Ashgrove. But no one really expected the LNP to actually lose office.

At the last election Labor crashed to a historic low of 26.9 per cent of the primary vote and just seven seats in parliament. On Saturday the swing towards Labor was an enormous 11.4 per cent. A minority Labor government looks likely.

These seismic swings over the last two elections show how distrust has eroded the support of the mainstream parties. The underlying reason is the shared commitment of both Liberal and Labor to more neo-liberalism, privatisation and cuts. Both remained determined to pursue “economic reform” through attacks on services and workers’ living standards.

Newman styled himself “Can do Campbell” and promised voters “Strong choices”. But he was seen as a thug who went out of his way to pick fights. Over the last year he declared war on bikies, lawyers and doctors.

But it was his slash and burn austerity policies and the threat of further privatisation that were the key to his defeat. Newman used lies about a debt crisis to justify 14,000 sackings in the public sector and savage cuts to health services including Aboriginal and HIV/AIDS programs.

In 2012, Anna Bligh’s Labor government was annihilated after a $15 billion privatisation sell off of Queensland Rail freight, forestry and the Port of Brisbane. But Newman didn’t get the message, pledging $37 billion more privatisation in power and ports if he won re-election.

The LNP is in denial about the hostility towards its policies. Newman was still arrogantly insisting on election night that his attacks, “were necessary and I do truly believe that they have put Queensland in a far better place.”

This time Labor has opposed privatisation, with leader Annastacia Palaszczuk saying the result meant, “the people of Queensland sent a very clear message, and that message was—they do not want their assets sold.”

The desire to punish Newman and throw out the LNP saw votes shift from Katter’s Australia Party and the Palmer United Party to Labor, as well as the LNP. Palmer’s vote was less than half his result in the 2013 federal election. The Greens have celebrated a record vote, but in the context of the massive swing their increase of less than 1 per cent was unimpressive.

Palaszczuk thanked the unions, who held demonstrations against job cuts back in 2012, and since then ran a high-profile electoral campaign against Newman and donated millions to Labor’s campaign. However this has done little to bring real change to Labor.

Labor will not undo the damage done by Newman’s government. It opposed power privatisation, but its alternative plan to merge the existing energy network and generator businesses will mean job losses. Labor’s commitment to keep taxes low and aim for a budget surplus will limit any increase in spending on health, education and services. Its plan for 400 extra nurses and 2500 teachers goes nowhere near replacing the public sector job losses under the LNP. In health alone Newman cut 4000 jobs.

Reversing austerity will require the kind of serious industrial campaign that the unions avoided under Campbell Newman. There should be a fight to demand that Labor reverses all the LNP’s job cuts, restores services and raises tax on big business to fund health and education. The May Day public holiday has to be restored.

Abbott on the ropes

Newman’s austerity drive, justified by a Commission of Audit drawn up by former Treasurer Peter Costello, is exactly the same approach we have seen from Tony Abbott. And it is clear that Abbott has learned nothing from Newman’s defeat.

At his much anticipated press club speech on the Monday after the Queensland defeat, as calls for him to resign gained traction, Abbott thumbed his nose at voters. He called anyone who voted Labor “absent-minded”.

There was no apology for the cuts, no change in direction. Instead he looked for scapegoats. He wants to keep bashing refugees. He claimed his party was the party of national security and promised more surveillance and more anti-terror laws at the same time as Australian troops run rampant in the Middle East.

He claims he wants to stop “intergenerational theft” but Abbott is a climate change denier and it is the Coalition that is out to cut youth welfare and massively increase university fees.

The ACTU has called national stop-work rallies for 4 March. Everyone needs to back these rallies. The demonstrations can be the beginning of a real fight against Abbott. He is as illegitimate as Campbell Newman.

But the fight can’t wait until a federal election in 2016. Abbott has got to go. A determined fight now, can finish him and his cuts.