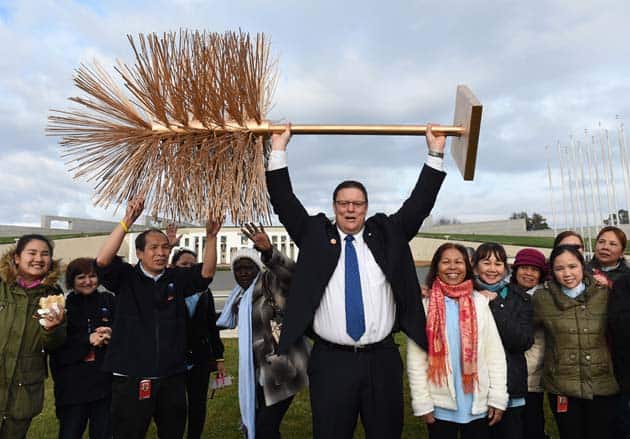 It was a moving moment. On International Cleaners Day, 41 striking cleaners walked out of Parliament House. Well over a hundred of us formed a guard of honour to show our support. The cleaners smiled, clapped, and laughed as they passed through. Some wiped away tears. They knew they were not alone.

Cleaners across Australia also struck. What is the fight about? The Abbott Government has dumped the Commonwealth Cleaning Services Guidelines. According to United Voice National President Jo-anne Schofield “cleaners of Commonwealth buildings have had their pay cut by an average $6837 a year as a result.”

On top of that the cleaners have not have had a pay increase for 3 years.

Their pay is frozen at the July 2012 rate of $22.10 per hour. If the Guidelines applied they would be paid $22.90 an hour. They want a return to that rate and 4 per cent pay increases each year after that. Their employer, Limro Cleaning Services, says their contract with the Government means they cannot give an increase above CPI.

As Ged Kearney, President of the Australian Council of Trade Unions told Solidarity, this campaign is about respect. “The ACTU supports these workers because their claims are just,” she said.

More than that it is a watershed dispute. “This dispute shows the Abbott government will target the low paid and cut their wages if it thinks it can get away with it,” Kearney said.

“The cleaners are an example of what we can expect from this government” she said. “It is why we have to support them.”

The supporters included members of other unions such as the CFMEU, AEU and Unions ACT. The cleaners’ union, United Voice, organised the show of support. At the end of the rally, the union presented the golden toilet brush award to Joe Hockey for being the person doing the “least to promote the wellbeing of cleaners in the previous year”.