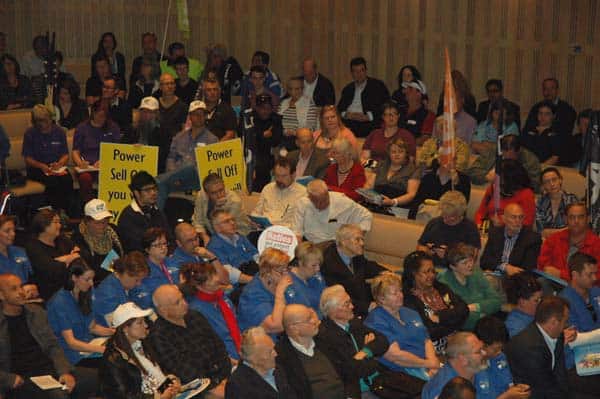 Unions NSW used a meeting of around 250 delegates yesterday to announce plans for a community-based state election campaign. But a group of rank-and-file activists won a resolution calling for a “Your Rights at Work style campaign including regular mass work-day rallies and stoppages and combined unions delegates meetings to oppose Abbott’s budget measures”.

It was clear leading up to the meeting that Unions NSW had decided to move away from a campaign against Abbott’s budget and instead focus on a “Jobs, Rights and Services” campaign to elect Labor in the NSW state election. Unions NSW Secretary Mark Lennon called on the meeting to participate in “189 days of action”—the number of days, minus Christmas and Boxing Day, until the election on 28 March.

The strategy mirrors that of unions in Queensland and Victoria who are focusing on their own state elections, and the ACTU’s focus on re-electing Labor federally in 2016. The ACTU called off a national day of action to Bust the Budget they had initially floated for 23 October.

Leading up to the 17 September meeting, activists decided to get organised following a previous delegates meeting in June, where a call for a discussion of industrial action was bureaucratically shut down by Unions NSW.

NTEU activist Sam Russell put the motion, backed up by a rousing speech from CFMEU delegate Dennis McNamara, who declared, to much applause, “there is lots of discussion here about a fight—well, we show them our fight by getting on the streets and taking industrial action!” Speaking of the mood in his workplace, he said, “The ACTU underestimates our willingness to fight” and that given the lead, “we’ll follow.”

This time, rather than shut down the debate, Unions NSW rushed the motion through, with no one prepared to speak against. Its success will help increase the pressure on Unions NSW for a more serious budget campaign.

A fuller discussion was shunted to another meeting to be held at Unions NSW on Thursday 23 September. Union activists will now have to mobilise for this meeting as part of a push to turn the motion into reality.

The mood is firmly on our side. Thousands have joined the March Australia demonstrations and Bust the Budget rallies. Up to 20,000 marched in Melbourne on a weekday in June, with many taking “illegal” stopwork action. Not a single fine has resulted.

Tarring Liberal Premier Mike Baird in NSW, who leads Labor 54-46 in the polls, with the brush of Abbott’s horror budget and the attacks on Medicare, universities, the jobless and pensioners, can help dent his support.

But we will need to get organised and build stronger rank-and-file networks and campaign groups like Save Medicare to force the hand of the union leadership.

Come to the meeting at Unions NSW, 377-383 Sussex St, 12.30pm next Thursday 25 September to help push to make the day of action happen

The full text of the motion passed at the meeting is below:

Tony Abbott’s budget has generated enormous and widespread anger. It hurts workers, students, pensioners, the sick and the unemployed while looking after the interests of big business and the rich. But we can’t rely on the Senate to block these cruel cuts. We need an ongoing union campaign to Bust the budget.

1. This meeting calls on the ACTU and Unions NSW to organise a Your Rights at Work style campaign including regular mass work-day rallies and stoppages and combined unions delegates meetings to oppose Abbott’s budget measures.

2. This meeting calls on the ACTU to reverse its decision to cancel the scheduled October 23 National Day of Action.

3. This meeting calls on Unions NSW to ensure that:

(iii) Unions NSW call a combined unions delegates meeting within a month after the day of action to plan and call further union stopwork action to oppose all aspects of the Abbott budget.