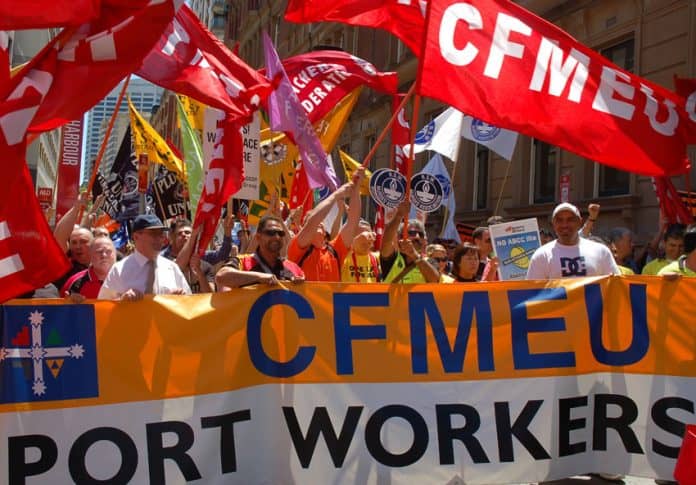 Tony Abbott has seized upon reports alleging corruption in the construction union to press his case for a Royal Commission and a new round of union busting.

The media has gone into overdrive depicting the CFMEU as helping companies run by organised crime get work on building sites. The union itself has called for any information about corruption to be handed to the police, and pledged to co-operate with any police inquiries. It has launched its own investigations into these claims, as well another allegation against Victorian secretary John Setka.

The claims of corruption have resulted in the resignation or dismissal of three CFMEU organisers, one for accepting free renovation work on his home, and another “gifts” from a contractor. Yet these three are a tiny number of the 400 full-time staff the union employs nationally.

There have always been individual corrupt union officials. But unions are democratic organisations controlled by rank-and-file union members. There is a proud history of rank-and-file challenges to remove unscrupulous officials—such as in the BLF in NSW in the 1960s.

The record of corruption from the construction industry bosses is far more serious—with nothing even approaching the same media spotlight or calls for an inquiry.

Leighton’s is one of the country’s biggest construction firms. Former Leighton’s boss Wal King was exposed last year as having paid an enormous $42 million bribe to win a building contract in Iraq.

The company was earlier accused of involvement in price fixing during a NSW Royal Commission in 1991. King admitted, “Virtually every major builder in NSW was participating in the practice, which went on for many years.” Companies were apparently paid off for submitting bids for work designed to be unsuccessful.
Another public inquiry in 1994 found King “not of good repute, having regard to honesty and integrity”. But he was allowed to continue running the company until 2011.

Such practices have been widespread. According to labour historian Humphrey McQueen, “In mid-2004, the NSW ICAC found that corporations such as Transfield had bribed public officials to issue competency certificates…

“Similarly the ABCC was surprised early in 2012 when thirty Victorian building inspectors were charged with ‘alleged corruption, serious misconduct and harassment’; they allegedly took kickbacks to block formal investigations.”

Grocon even used bikie gang Hell’s Angels on a building site in Brisbane to intimidate striking workers. But unlike the stories of union corruption, none of these made the front page of the papers.

More seriously still, construction companies have a history of cutting corners on safety at the cost of workers’ lives. Last year alone 19 people died on construction sites. Without the unions’ vigilance on safety the toll would be higher.

In its aftermath, the Liberals set up the ABCC, granting it extreme powers to continue policing the industry. Its focus too has been overwhelmingly on unions for breaching industrial law, not criminal offences. This is Abbott’s real target—he wants to stop the unions staging the ordinary union activity and strikes that make them effective.

Now Abbott is using the new allegations of corruption to justify the re-introduction of the anti-union ABCC, blocked by Labor and The Greens in the Senate until July, as well as his Royal Commission into the unions.

The reason the construction unions are targeted is because they are amongst the best organised and most effective unions in the country. The construction industry bosses are constantly complaining about the “high cost” of building work—loathing the way unions are able to win better safety and higher wages for their members.

We should never lose sight of the way Tony Abbott and the employers want to use these allegations—or the need to oppose their agenda of union busting, targeted at the union movement as a whole.