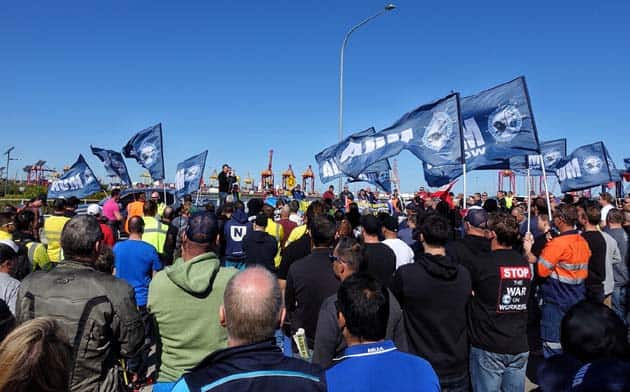 The week-long protest and strike by Hutchison MUA members has been an inspiring show of determination and defiance. There was fantastic solidarity from other port workers and other unions who backed the picket lines, and collected money to support the picket.

The pickets continued despite the Fair Work Australia orders to return to work.

On Thursday night the Federal Court ordered Hutchison to re-hire the 97 sacked workers and to continue paying them at least their base rate of pay. It looked like a straight-out victory for the Hutchison workers. But the court also said Hutchison did not have to actually engage the sacked workers.

The court decision effectively meant that the workers wrongly sacked by Hutchison were left outside the gate. In this situation, it was a mistake to return to work. Either everyone is in, or everyone has to be out.

On Friday workers in Sydney and Brisbane marched back into work. Protesters marked the return with chants of “Whose port? Our port!”

But by the afternoon, it was obvious something was wrong; Hutchison was still playing divide-and-rule. In Sydney, as one worker told Solidarity, “in the afternoon we all marched in and when we got there they wouldn’t let the mechanics on.”

The mechanics who turned up for work in Sydney, maintenance workers who are required to be on site for health and safety reasons, were all workers sacked by the company. As the Hutchison worker said, “those guys were rostered on and wanted to go in, but they said ‘no, sorry, you’re not rostered on – we haven’t allocated you’.

Leaving the sacked workers outside is already creating concerns. As one worker told Solidarity, after they returned to work on Friday, “I never wanted to go back in, not until everybody goes back in. We were in there, but we were gutted.”

The company is determined to pick and choose who does the work, and is refusing to allow the ‘sacked’ workers back in the gate.

The Federal court is not reconvening until 1 September. By that time, the situation could have substantially changed. Hutchison could decide that it wants double the number of redundancies. Or perhaps they are planning to completely shut up shop. It is already looking like Hutchison’s is just using existing labour to work themselves out of a job.

In this situation, the union has to be able to negotiate from a position of strength. The only sensible approach is to keep the workforce united; restart the strike action, and maximise the pressure on Hutchison’s.

Restarting the strike would mean defying the orders from Fair Work Australia, but this is what Hutchison workers have had to do all along. There is a risk of fines; but bad laws have to be broken.

The whole workforce needs to stick together and keep fighting the sackings.
The union also needs to stop the sub-contracting that is allowing Hutchison to meet its contracts by diverting its ships to other companies. If that means solidarity action is needed from workers at DP World and Patrick, so be it.

Hutchison is trying to hollow out the business by sub-contracting most of its work to the other terminal operators, DP World and Patrick. This threatens the jobs of all workers at Hutchison.

We need to defend every job. That means restarting the strike and the pickets now. There will be no problem building solidarity across Australia and the world for the pickets. Every worker in Australia knows what this greedy multinational is trying to do.

There is no justification for any job losses at this terminal. More than $1 billion of public money has been invested to build it. There are plenty of ships to service.

Hutchison is the biggest stevedoring company in the world. They can keep all the workers on and still turn huge profits. But if Hutchison aren’t willing to run at capacity, we need to demand that the government takes over the port operations and guarantees no one loses their job and that the terminal continues working under public control.

Smeaton Grange workers are facing further attempts to delay action, wear down workers and wind up the dispute.

An unprecedented national assembly of university workers has condemned the job cuts and funding cuts to the university sector and resolved to mobilise against them, including going on strike.