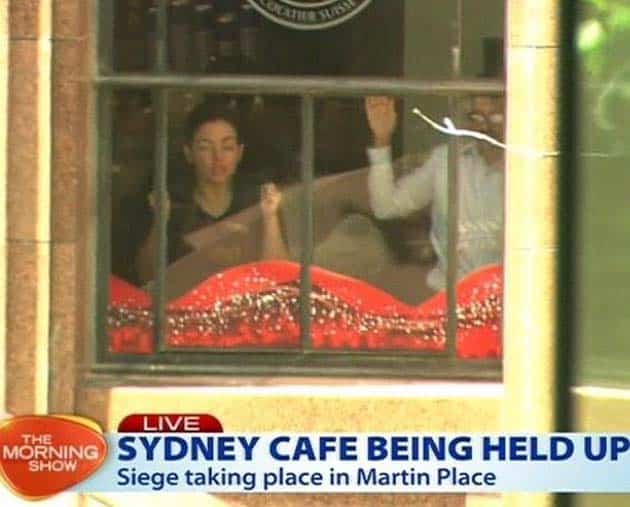 The media have launched a torrent of anti-Muslim scaremongering in response to the hostage situation in Sydney’s Martin Place.

While full details are not yet clear, it appears a single armed man has taken around 15 people hostage inside the Lindt Chocolate cafe. Video footage shows the man wearing a black headband, and a black Islamic flag displayed in the building.

But without waiting for the facts to be established, the tabloid media has gone into overdrive. In the wake of the news of the siege, shock-jock Rad Hadley was immediately on air to scaremonger about police anti-terror raids happening in Lakemba while the hostage drama was unfolding, only for the Federal Police to deny there was any truth in the claims.

The Daily Telegraph rushed out a special 2pm edition with a front page screaming of an Islamic State assault in a “Death cult CBD attack”.

Right-wing commentator Piers Ackerman announced that Islam as a whole was to blame by saying Sydney had been “catapulted into the horrific realm of Islamo-fascism”, and telling readers that the words on the flag captured in grainy images by Channel 7, “are those of a Muslim prayer used by Islamists”.

He then stoked hysteria by spreading “unconfirmed reports” of bombs at other locations.

Since the dramatized anti-terror raids launched in September, there has been a wave of violent hate attacks on Muslims. This media scaremongering will result in scores more violent attacks.

Abbott has already shown his desire to whip up scaremongering about terrorism in order to shift the political focus onto national security issues. He hopes to repeat what John Howard did after 9/11 in using terrorism to boost the government’s standing and authority.

This failed earlier this year, with widespread cynicism of Abbott’s motives. But if it turns out there are real terrorist motives behind this incident, his scaremongering will start to seem more potent.

But, if the Martin Place siege does turn out to be politically motivated, the blame will lie with the West and with Abbott. It will be another example of blowback against Abbott’s keenness to go to war in Iraq, joining US bombing raids, and his government’s backing for the indiscriminate Israeli bombing of Gaza.

The hate attacks on Muslims, combined with constant police harassment and investigation, also adds to the feeling that the Muslim community is being targeted.

Today’s events are a gift to Tony Abbott. On the day the mid-year budget update was released, the government’s budget will largely escape scrutiny.