Following the Northern Territory elections last month, a community meeting of Aboriginal residents and traditional owners from Kalkaringi, Dagaragu and Lajamanu are calling for an end to the hated “mega shires”, announcing that they will refuse to sign any government leases over their land and calling for the scrapping of the whole, hated NT Intervention policy.

Statement from community meeting of Kalkaringi, Daguragu and Lajamanu residents and traditional owners.

People from communities of Kalkaringi, Lajamanu and Daguragu are today demanding that the Victoria Daly Shire and Central Desert Shire leave our communities immediately. We also want the Government Business Manager from the Intervention to leave our land now. They have no legal right to be here and are unwanted.

We want our community council to come back. We can run our own affairs and are sick of being bossed around by government and outsiders. Our communities have had so much damage done to them since 2007.

We will not be signing any more leases – this is Aboriginal land that we fought hard for and we must be in control. We also need our permit system back so we can control who comes into our land. Aboriginal law must be respected. This land was given to the Gurindji people in 1975 with the words, “in perpetuity” – forever. But this has been taken away.

We have lost all of the assets we had built up over many years. Buses, heavy machinery, vehicles, housing, our offices, millions of dollars from our council bank accounts – everything has been robbed from us.

We had enterprises running here that have been taken apart. 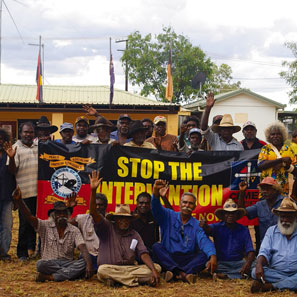 We demand full compensation for this. We demand a full budget to run our council again. We can’t just have a council with no money, jobs or vehicles – everything must come back to us.

Aboriginal people have even lost control of our night patrol – people from outside our community are now driving around in night patrol vehicles. This can not work.

The Shire and Intervention have until the end of November to get out of our communities or we will be taking action ourselves to have them removed. We stand in solidarity with other communities taking the same stand.

The new CLP government in Darwin got elected because they promised to get the Shires out. They also promised to fund our outstations again. They must be held accountable for these promises and see them become real. We invite Alison Anderson, Adam Giles and all these politicians to come and talk about putting our cry for change into action. We want to see Minister Jenny Macklin who has been running the Intervention from Canberra to come and see us.

Finally, we demand an apology for all the terrible things that were said about Aboriginal people for the Intervention – this was very racist. If the CLP in Darwin want to work with us properly we need them to say sorry for what the Liberal Howard government did.

We want supporters around the country to keep fighting to stop the Intervention and support our demands for community control and all our funding and assets to come back.