Thousands of Indonesian students, unionists and workers took to the streets in anger in June as the government forced through major cuts to fuel subsidies. The cuts mean a whopping 44 per cent petrol price rise.

President Susilo Bambang Yudhyono (SBY) boasted in his 2009 re-election campaign that he was the only president to ever lower the price of subsidised fuel. But he has now pushed through cuts that will force the majority of the population into further poverty.

The fuel price rise only adds to the hardship from similar subsidy cuts to electricity late last year. Mika, an organiser for the union alliance Sekber Buruh told Solidarity that the prices rises will hit hard, “because [many people] use motorbikes that require two to three litres of petrol a day, and then on top of that the subsidy cut has also sparked a rise in the cost of other basic necessities too.” These include transport, food, clothing and other basic goods. 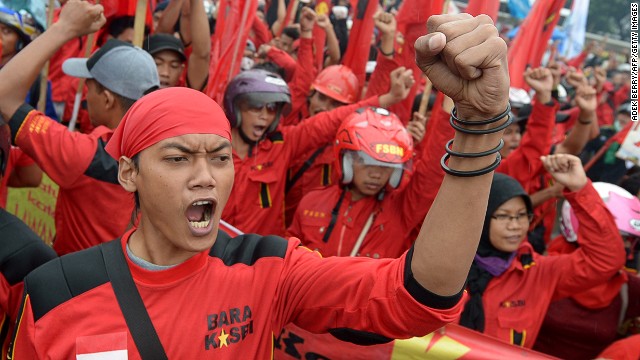 However, intent on passing the bill after mass mobilisations of students and unions stopped similar fuel price rises last year, large numbers of police were deployed and protests were heavily repressed.

Nineteen thousand police armed with water cannons and tear gas were deployed in the capital Jakarta on the day the legislation was voted through. Meanwhile protesters in Tenate, North Maluku, were fired on with rubber bullets. Several students and a photographer were seriously injured. Tear gas was also used against protesters in Jambi, Sumatra.

Despite the police repression, tens of thousands of workers rallied in the industrial region of Bekasi, just outside of Jakarta. Militant workers in Bekasi last year won a new minimum wage of approximately $217 a month. Now however, with the rise in the cost of petrol and other goods, that money won’t go far.

Workers poured out of factories and rallied other workers at neighbouring plants to join them on the streets. They paralysed three industrial areas and stopped production for several hours. Several major union confederations and alliances were involved including the FSPMI and Sekber Buruh.

Said Iqbal, the President of the Confederation of Indonesian Workers Union (KSPI) has said that if the government does not respond they will call for a national strike in August when President SBY is set to give his budget speech.

Subsidies on basic goods have been important for keeping down the cost of living for the poor in Indonesia.

However, following the 1997-98 Asian economic crisis the IMF cut a deal with the Suharto dictatorship to cut subsidies in exchange for bailout loans. Suharto increased fuel prices by 70 per cent in May 1998 triggering large protests which helped bring down his dictatorship.

Habibie, who then took over as President, continued with the IMF’s agenda, aiming to deregulate the energy market totally by 2003. As a result the oil and gas industry was further opened up to foreign investment and the state-owned oil and gas company, Pertamina, was forced to compete directly with the international market. Fuel prices increased again in 2002 and in 2008, prior to this year’s price hike.

Yet big business and foreign investors insist that the cuts to subsidies continue. The powerful Employers’ Association (Apindo) has even come out against the pitiful cash handouts SBY has offered the poor as compensation for the price increases this time.

Not only is the government attacking workers’ living standards, it is moving to crack down on dissent in an effort to protect the interests of business.

After passing the legislation on the fuel price rise, parliament turned to debating the Societal Organisations Bill. The law allows the government to monitor the activities of unions and political organisations and require them to, “maintain the unity of the state, uphold morality and ethics and nurture the country’s religious and cultural norms.” According to the Indonesian Legal Aid Foundation, this, “will set-back democracy by silencing the community.”

The Indonesian government is set on welcoming foreign investment and so is moving to suppress any protests that threaten to disrupt business operations.

The rising strength of the workers’ movement in Indonesia is the likely target. On the day the bill was passed workers from the major union FSPMI were set to walk out for a national strike only for the union leadership to call the strike off.

Strikes in Indonesia in recent years have won better wages and conditions for some of the lowest paid workers in southeast Asia.

Continuing and deepening the strikes will be needed if workers are to successfully fight off both the fuel price rises and the attack on their right to unionise.