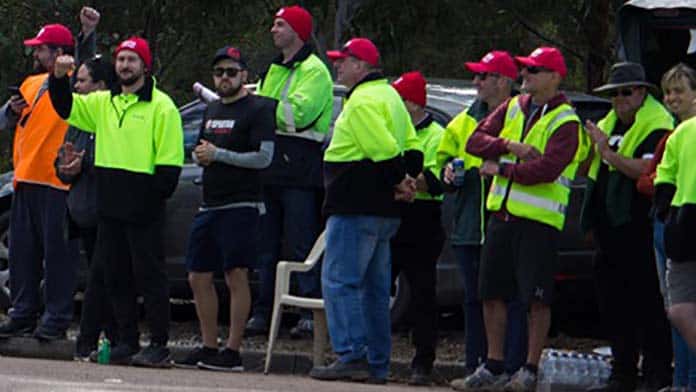 Workers at the Woolies distribution centre at Wyong on the NSW Central Coast have been locked out indefinitely since Friday after taking strike action demanding equal pay and reduced casualisation.

Michael, one of the workers on strike, told Solidarity, “It’s garbage. Five hundred people will go without pay, last week and this week now. We couldn’t even come back if we wanted to, to earn money for our families.

“We’re losing money each day. And that scares people. But we have a fight on our hands. And it’s motivated us to win.”

The over 500 workers at the centre are paid 16 per cent less than distribution workers in Sydney and elsewhere in NSW. They are demanding equal pay with other centres, 80 per cent permanent jobs, and a reduction in work speeds.

Many have been kept on casual contracts for years. This allows management to subject workers to humiliating performance checks. This is then used to justify refusing them permanent contracts, despite being long term employees. Shift times are also changed at the whim of management, with no notice. One worker told Solidarity that casuals had been called in multiple times in a single day, only to be sent home again after management changed their mind.

After taking 24 hours of protected industrial action on Friday 24 July, Woolworths locked them out for five days. Workers stayed on strike for a further day but Woolworths stormed out of negotiations after offering only a 0.6 per cent improvement to its pay offer, and imposing the indefinite lockout.

Woolworths has profited from an unprecedented sales boom all around the country as a result of the COVID-19 pandemic.

“When COVID hit we got flattened. We had to work overtime. People were burning out from the amount of work here.” Michael told Solidarity. “Now, you’d think we’d maybe get a reward for that. People busted their guts through COVID. Our reward is we got locked out.”

The company made $16 billion in the first half of 2020, with profits down only because it has had to compensate workers illegally paid below-award wages, and because it spent hundreds of millions automating distribution centres—slashing thousands of jobs during the biggest unemployment crisis since the Great Depression. If anyone should be paying for this current crisis, it should be criminals like Woolworths.

Management even claimed that workers should be grateful to be employed at all in the current climate. But this dispute has been a long time coming.

This is not the first time workers at Wyong have put up with shocking conditions to keep supermarket shelves stocked, “During the fires, you couldn’t breathe in here from the smoke, Michael said. “It was crazy. If we were going for this pay rise just based on getting through the fires, I think it would be justified.”

Woolies is trying to shift orders from Wyong to its other distribution centres, including the Minchinibury centre in Sydney, to keep its stores stocked.

These other distribution centres should refuse to process the orders in solidarity. This would cripple Woolies’ stores in the Central Coast area and force them to concede. Such action requires confronting the anti-strike laws which ban solidarity action.

The strikers at Wyong are continuing to stand strong. As the Morrison government and bosses everywhere try to make workers pay for the COVID-19 crisis, the Wyong workers’ action is a model for workers everywhere.

By Cooper Forsyth and Tooba Anwar

Support the Woolies workers by donating to their strike fund here

Woolies workers win big on permanency and pay, but more to be gained