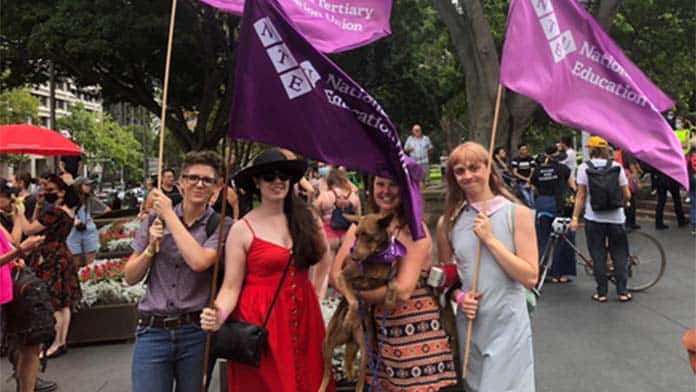 The National Tertiary Education Union has won 30 days of paid gender affirmation or transition leave at the University of Sydney (USyd), setting an industry-leading standard.

This is an important win for transgender and gender diverse workers. They can now access leave while undergoing social transition, such as changing names, pronouns and presentation, or coming out at work, or while they access transgender medical care such as hormone therapy or surgeries.

One USyd associate professor called gender affirmation “one of life’s many challenges”, arguing that forms of leave for gender transition or domestic violence were not “equitable”.

However, unionists should see “equity” as about addressing social inequalities in the workplace. Forcing oppressed groups to draw down their sick leave or personal leave simply enforces inequities.

Fighting for the right to transition is an important way to combat systemic transphobia. Social oppression can be particularly concentrated during the time of “transition”.

Transitioning can sometimes mean strained personal relationships, high medical costs, losing secure employment and housing or dropping out of formal employment altogether. And all of this deepens oppression and shame.

It is extremely politically significant when the union movement stands for trans rights. A transphobic system in NSW still requires trans people to get genital surgeries before they change their recorded birth certificate gender.

The campaign continues at USyd, where management are holding out on annualised gender affirmation leave, proposing instead a “one-off bank”. This perpetuates the idea that affirmation or transition is a one-time binary neatly tied off after six weeks of surgery and recovery.

Such a rich institution can easily afford to support the small number of people likely to use the leave.

More than 200 people have signed a petition backing the original demand. An open fight against transphobic ideas at work is key. Even at a place like USyd, the weight of transphobia can pressure people to keep transitioning a secret.

The same people pinching pennies on trans leave are the ones busy cutting jobs and slashing courses. Trans rights are workers’ rights and transitioning should be a right at every workplace.

Sign the petition to support transition leave at USyd here