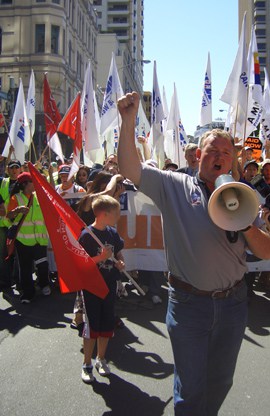 Construction unions are gearing up for a fight, after the Senate approved changes to speed up the re-introduction of the anti-union Australian Building and Construction Commission (ABCC).

A national day of protest is planned in March. Hundreds of construction workers walked off the job to protest in Adelaide in mid-February. CFMEU National Secretary Dave Noonan told the crowd, “This is the first rally. This is not the last rally.”

The main job of the ABCC is to police the industrial laws which criminalise effective union action. Fines will increase to $34,000 for individual workers and $170,000 for unions every time they breach the anti-strike laws.

As Malcolm Turnbull has admitted, the ABCC is designed to, “improve productivity and reduce building costs” through reducing “days lost to industrial disputes”. In other words, union strength has been costing the bosses too much money.

The government managed to pass the ABCC legislation late last year. But it was forced to delay the introduction of the associated Building Code so that existing Enterprise Bargaining Agreements could continue unchanged until November 2018.

Now the Code will come into effect in September, thanks to Senators Derryn Hinch and Nick Xenophon.

The items banned by the Code show that the legislation is simply an attack on the unions and workers’ conditions. Banned clauses include guaranteed days off for Christmas Day and other public holidays, the requirement that sub-contractors pay their workers the same as other workers on the same site, and limits on ordinary working hours that prevent excessive overtime. Also gone are requirements to employ a certain number of apprentices on site.

The Code also targets unions through banning any additional rights to enter workplaces for induction sessions or holding meetings on site, and banning full-time union delegates at workplaces.

From September any company that has signed an Enterprise Bargaining Agreement containing clauses outlawed by the Code will be unable to work on federal government projects.

This is designed to discipline major builders, who stand to lose money if they are excluded from the multi-billion dollar government contracts.

Many agreements will be re-negotiated. Outside Victoria, the CFMEU has agreed to clauses in Enterprise Agreements allowing bosses to reopen negotiations to comply with the Code.

The CFMEU is promising to extract extra wage increases to compensate for any loss in conditions.

Everyone needs to get behind the construction unions’ fight. Last time around it was defiance of the ABCC that helped to finish it off. Bad laws deserve to be broken.