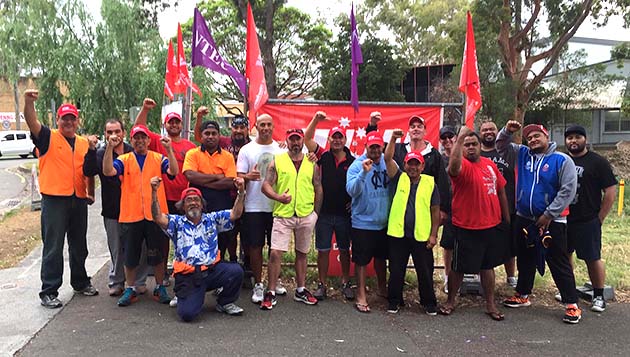 After three weeks on strike, workers in Brookvale, North Sydney have won demands for union representation and a 2.5 per cent pay rise.

The company, Harrison Manufacturing, employs around 20 workers producing oil and lubricants for Valvoline in NSW.

Jozadak Fa’aumu, one of the workers, told Solidarity the dispute was, “first and foremost about respect in the workplace, and having a union represent us.”

“[The current manager] Frank’s been here about six years and we’ve had nine to ten boys sacked in that time. There’s a sacking frenzy going on. Most of those sacked have families and young kids and it’s affected them really badly. So we’re trying to put a stop to this.”

Workers were angry about a clause in the EBA which specified only a “support” person could be present in disciplinary meetings, not a union delegate. The support person was not allowed to advocate or even talk in the meeting. This made it easier for management to get away with sacking people.

Now they will have the right to have a union delegate or organiser speak on their behalf in disciplinary meetings.

The picket line successfully shut down the factory, stopping trucks entering. This put the company under serious pressure. After two weeks the manager broke the picket, bringing in nine trucks on a Tuesday night with the help of trucking contractors. But driving through workers’ families on the picket line was an experience that seems to have convinced management to buckle.

At the beginning of the third week management contacted their union, the National Union of Workers, to request a meeting.

Management said they were prepared to negotiate once the workers let four trucks in. After they decided to only let one through, the boss agreed to negotiate.

Over three weeks, workers maintained a 24-hour picket line, camping and sleeping outside the plant. Support visits from groups of students, other unionists and even workers from surrounding industrial complexes helped keep their spirits high.

The company agreed to increase its offer from a 1 to 2.5 per cent pay rise, and will remove the bottom pay-grade from the agreement, increasing the minimum wage at the site.
The boss had no option but to give in and offer fairer working conditions to the workers at Harrison.