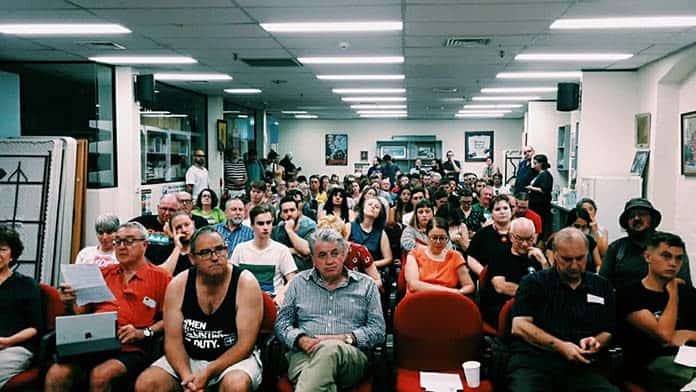 Just over 100 people packed into the Maritime Union’s Sydney office on 14 April to discuss the right to strike.

The meeting brought together groups of union members from the CFMEU, RTBU, NTEU, MUA, Teachers Federation and other unions.

The construction union’s NSW President, Rita Mallia, told the meeting, “workers have won everything that’s worth anything by taking industrial action”.

The CFMEU has been targeted with special laws and the industrial police of the Australian Building and Construction Commission to try to stop industrial action on sites.

“You can’t sneeze on a building site without breaking these laws”, Rita said.

“Just this week we had a company take us to the Fair Work Commission over our refusal to take down Eureka flags and CFMEU flags. We told them whatever you say they’re not going to come down.”

“We’ve got to repeal all the penal powers against all strikes”, Chris White, former Secretary of the South Australian Trades and Labour Council, told the meeting.

Detailing how restrictive current laws are, he explained that, “If we had an unrestricted right to strike… existing employer legal sanctions to stop strikes and fine striking unionists would not be available.”

“Unions should be free to organise and strike over any form of bargaining: enterprise, industry, national bargains, supply chains, all of this has to be lawful.”

Workers should be, “free to vote to strike democratically at any time”, he argued.

The catalyst for the meeting was the Fair Work Commission’s decision earlier this year against Sydney train workers.

An RTBU delegate explained how, “recently we had our right to strike taken away”.

“We jumped through the Un-Fair Work Commission’s hoops and we gave Sydney trains and NSW trains notice, that if they didn’t come to table with a fair offer we would strike for 24 hours.”

“It took the Commissioner 30 minutes after hearing both sides of the story to make his decision.”

One key reason was that the strike would “cause significant damage to the economy”. As the delegate put it, “last time I checked that was the point of a strike.”

“It was a sad day not just for the RTBU but for workers everywhere”, she said.

“Instead of buying into the fallacy that we have no power, what we should have done was gone out anyway. The only instrument that the worker has to demonstrate their power is to withdraw your labour. And if we can’t withdraw our labour, we’re all slaves.”

“The only way forward is to stop playing their games and by their rules because we’re never going to win like that, they’ve made sure of it.”

“The system is broken, we need to defy it and smash it and start again.”

The meeting passed a motion saying it “supports the unrestricted right to strike to be a central demand of the ACTU’s Change the Rules campaign”.

A motion was distributed to move at union branches with the same demand, and for an industrial campaign to Change the Rules, with a combined unions delegates meeting and stopwork rallies.

The meeting laid the basis to start a renewed campaign for the right to strike.

For copies of the motion email erima.dall at gmail.com or message the Right to Strike page on Facebook