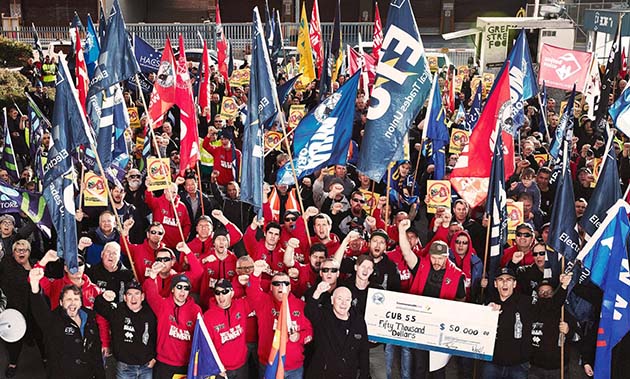 In December, electricians and fitters at the Carlton and United Breweries, known as the “CUB 55”, won a return to work on their previous wages and similar conditions.

This came after six months on the picket line, and an extensive nationwide campaign across the union movement to boycott CUB beers.

It would have been a serious loss for the union movement if employers had gotten away with slashing of wages by 65 per cent at this highly unionised worksite.

Although not all the details of the return to work are public, the unions greeted this as an unqualified victory for the strategy of boycotting CUB products.

The AMWU said the result showed “the power in our union”. ETU organiser for the CUB 55 Steve Diston told Solidarity, “This dispute is more than a win for 55 tradesmen in Melbourne, this is an example for working class people across the country.”

The workers involved showed absolute dedication and commitment to hold out for so long.

Long-time unionist and 67-year-old Alan Dinon campaigned throughout the six months but retired and handed over his position to a new apprentice.

But it was an enormous strain. Seven of the 55 had broken the strike and gone back to work. Workers told Solidarity they have faced difficulties at home, personal threats and intimidation themselves and even against their partners.

But the CUB “boycott” victory is unlikely to be repeated. CUB got a new owner four months into the dispute. Global brewer, AB In-Bev, was keen to get production going and under pressure offered jobs back to the CUB workers.

The boycott strategy was a way of avoiding serious industrial action and does nothing to boost workers’ confidence more widely to fight at a workplace level.

Several hundred unionised workers remained at work throughout the dispute.

If the union leadership had been willing to break the law and call out the other unionised CUB workers in Melbourne, or at CUB’s Queensland brewery, this dispute could have been resolved in weeks.

Whilst the new agreement apparently included some compensation for wages lost, it also meant a backdown from union members on a new rotating roster, meaning less control over their hours of work.

The win at CUB demonstrated the commitment of the CUB55 but a boycott strategy is no substitute for industrial action.

We need to draw the lessons from recent disputes at Harrison and Polar Fresh—if you strike you can win within weeks and start re-building workers’ confidence in their own power and organisation.