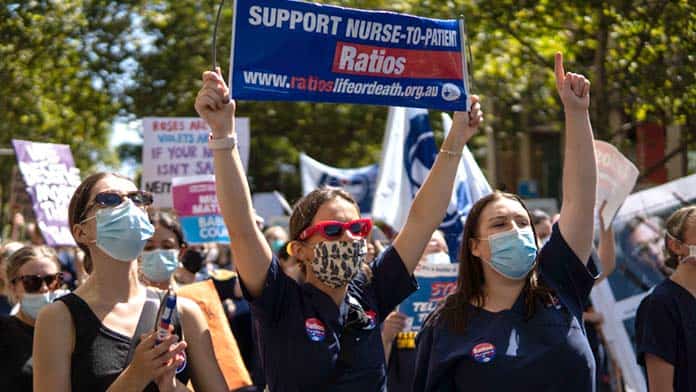 Public sector unions in NSW are stepping up their campaign against the state Liberal government.

NSW Catholic and government school teachers are staging an unprecedented joint 24-hour strike on 30 June, while nurses will strike on 28 June to hold a special general meeting to consider further action.

Public services are at breaking point, with schools, hospitals and other areas drastically short staffed after two years of the pandemic.

As Unions NSW Secretary Mark Morey explained, across the board there are “people doing double shifts, doing the work of two or three people in their workplaces”.

Wages have gone backward over the last year, and workers face a real pay cut of a further $3500 over the next three years, even after NSW Premier Dominic Perrottet lifted the public sector pay cap to 3 per cent. This is still well below inflation.

A motion passed at a public sector campaign launch ahead of the budget in June promised “further individual or movement-wide industrial action until these issues are addressed”.

A united stopwork rally could draw tens of thousands and seriously increase the pressure on the NSW Liberal government.

Unions need to name a date for a public sector-wide strike as soon as possible, either in July or August.

But there are signs that union leaders are looking to draw out the campaign to focus on voting the Liberals out at the NSW election in March.

The teachers’ strike on 4 May was held five months after their first strike. The last nurses’ strike was on 31 March, almost three months ago.

Perrottet and the Liberals need to go. But a campaign that folds into door-knocking for the state election will do nothing to build the union power needed to force the government to fund services.

This is a strategy the unions have fallen into again and again at both state and federal level, modelled on the Your Rights at Work campaign against John Howard’s Liberal government.

We can’t wait another nine months in the hope that a Labor government in NSW will fix the problems. Essential workers in the public sector have deep public support after their efforts during the pandemic. An escalating campaign of industrial action could force further concessions even from the NSW Liberals.

And if Labor does win the state election, unions will need to keep fighting to win our demands. In May, NSW Labor leader Chris Minns refused to support the nurse-to-patient ratios the nurses’ union is fighting for, because there were no estimates of the cost.