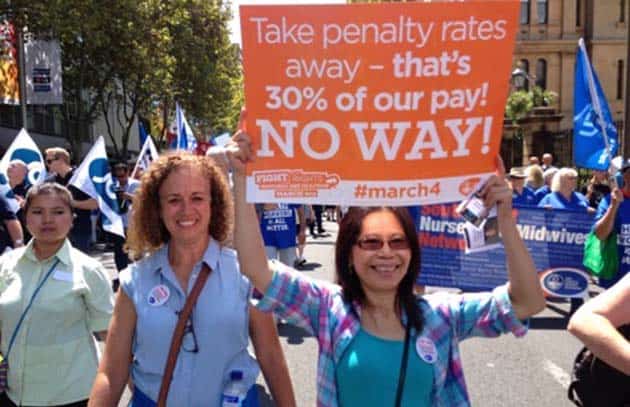 Workers are seething after the industrial umpire slashed penalty rates for a number of low-wage industries in a direct attack against some of the worst paid workers in the country.

An immediate union response can stop the cuts. Weekday stop-work rallies like we saw at the beginning of the Your Rights at Work campaign can kick off the campaign.

Construction unions are calling protest rallies on 9 March against the Australian Building and Construction Commission. We can link the fight to stop the penalty rate cuts with the fight against the government’s anti-union laws.

Malcolm Turnbull and the Coalition have been avid supporters of cutting penalty rates. When Tony Abbott was Prime Minister they set up a Productivity Commission report to prepare the way for it. Turnbull himself said that penalty rates were old fashioned and that cutting them was “inevitable”.

Liberal Minister Michaela Cash has already said that the government will “accept the decision” of the Fair Work Commission.

This decision will leave people up to $6000 a year worse off and will affect close to one million workers directly, according to union estimates. Sunday penalty rates and penalties for public holidays will be cut across the hospitality, fast food, retail and pharmacy sectors.

But this is only the thin edge of the wedge. If this attack succeeds the bosses will come after penalty rates for nurses, emergency workers and everyone else.

Labor leader Bill Shorten has called for legislation, “changing the rules that the Fair Work Commission will operate under”, instructing it to maintain penalty rates. The Greens have advocated legislation to include penalty rates as one of the statutory minimum National Employment Standards.

Legislation overturning this disgraceful Fair Work decision would be welcome. But that will not be possible until after the next federal election, at least two years away.

There is also a risk that penalty rates will just become an issue for the next election campaign. But the only way to guarantee penalty rates on every shop floor is to build workers’ ability to fight industrially.

It was the award review process created under Labor’s Fair Work Act which allowed the Commission to reduce rates.

The industrial courts operate on the basis of balancing the demands of business and workers. But they are part of the capitalist state and therefore take more account of the needs of business. Changing the rules under which the Commission makes its decisions is no guarantee rates won’t be cut again. During the Great Depression the industrial courts imposed a 10 per cent across the board cut in wages.

Dodgy agreements struck by the boss-friendly Shop Distributive and Allied Employees Union (SDA) created a precedent for penalty rates to be cut, making it much easier for Fair Work to make a general cut to the award. Even while penalty rates were still in the award they were traded away and workers on agreements with major employers, like Coles, were actually left worse off than if they had been on the award. The law itself was not enough to protect workers. Only direct confrontation with the retail bosses through strikes can protect current rates and win even higher ones.

That’s why a militant industrial campaign against the cuts is absolutely crucial right now. Big retailers have been stalling on negotiations for new enterprise agreements, waiting for this cut to be made so that they can use it as a basis for reducing penalties in agreements.

Bosses will only get away with cutting penalty rates if we let them. The ACTU has been running a “Save Our Weekend” campaign, but this has mostly been an electoral operation in marginal seats to get Labor elected.

The decision on penalty rates comes hot on the heels of the reintroduction of the union-bashing Australian Building and Construction Commission (ABCC). This is another attack on workers’ conditions which is designed to boost business profits. Such a vicious attack on huge numbers of workers cannot go unanswered. We can’t afford to wait for a Labor government to change the law, nor rely on Labor to keep its promises if it wins power.

A campaign involving stopwork rallies could help build union strength and workers’ confidence to fight. It will also need to feed into campaigns based on strikes and industrial action in enterprise bargaining, to defend penalty rates at a workplace level, industry by industry.

It’s time to start the fightback.

What does Fair Work’s decision mean?

In hospitality and fast food full-time and part-time workers will see a 25 per cent reduction in their Sunday penalty rates from 175 per cent to 150 per cent.

The public holiday rate will be slashed from 250 per cent to 225 per cent for full-time and part-time workers.

The public holiday cuts will come into force from 1 July this year, while the rest will be phased in over the next one or two years.

Why does Fair Work have the power to set penalty rates?

Awards provide the minimum pay and conditions that employers must adhere to in each industry and are regularly reviewed by the Fair Work Commission.

The cuts come as part of the review of the industrial awards that has been running for around three years, and after employers made specific applications for cuts to penalty rates.

The Liberal government chose not to make any submissions to the review, where it could have argued against any cuts.

In workplaces where unions are better organised workers are usually on Enterprise Bargaining Agreements that set pay and conditions above the basic award.

How did Fair Work justify its decision?

The tribunal justified the cuts on the basis that it will increase the number of jobs because cafes and restaurants could increase trading hours. But there is little evidence for this argument. Instead, the same workers will just have to work longer hours in order to get the same weekly pay packet. There will be no increase in jobs, just an increase in profits for bosses.

Research by Citibank has conclusively shown this. Its report published in November said that retailers would retain all of the benefits of penalty rate cuts in the form of profits and would increase their returns to shareholders by between 5-8 per cent. The key finding of the report is that there will be no overall increase in employment because of penalty rate cuts.

Retailers aren’t exactly struggling to make profits. On the same day the cuts were brought down, Retail Food Group announced its half yearly results. The company owns Gloria Jeans, Donut King, Crust Pizza, Michel’s Patisserie and others. Profit was up by 17.3 per cent to $36 million, thanks mainly to strong margins in cafes and bakeries. So the arguments by politicians about cafes having to shut down because of Sunday penalty rates are clearly lies.