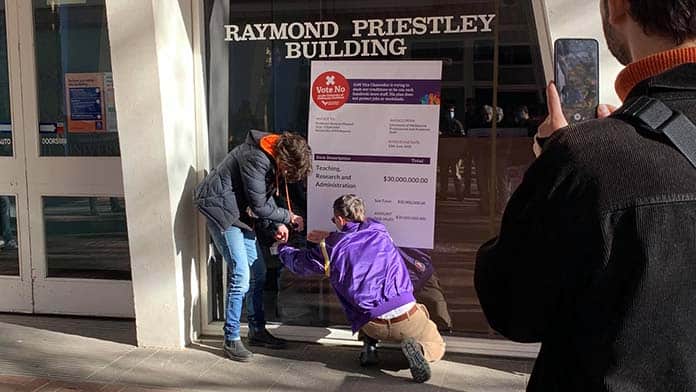 NTEU members at the University of Melbourne (UoM) have dealt a decisive blow to management, voting No to a non-union ballot to vary the existing enterprise agreement.

The result strengthens campaigns against management-driven variations at other campuses including ANU and Wollongong Uni. But the union leadership is continuing to push its own variations at three universities where management backs their failed national framework.

UoM had sought to cut pay by 2.2 per cent and reduce redundancy entitlements.

The day before the vote opened, activists organised a socially distanced protest outside the Chancellery building in the morning, crashed the VC’s online webinar at noon and facilitated an online casuals’ speak-out in the evening to clinch the campaign.

The variation was resoundingly defeated, with 64 per cent of staff voting no. Out of this victory, we have many more activists and delegates involved in the branch for the fight ahead of us.

The non-union ballot was management’s response to the profound crisis facing the higher education sector. For decades, university managements have been singing from the neo-liberal song book and running universities like businesses, reliant on private funding arrangements like corporate sponsorship and domestic and international student fees.

COVID-19 has wreaked havoc on this model. The federal government has refused to step in with any stimulus package for universities, as it has elsewhere, and staff have been denied access to the JobKeeper scheme. In response, UoM management is trying to pass the bill on to staff and make us pay for the crisis. The variation was their first attempt. But it won’t be their last.

Shamefully, the NTEU leadership had adopted a strategy of concessions that dovetails with managements’ attempts to pass the pain on to staff. Their failed “National Jobs Protection Framework” (JPF) rested on a vague promise to save jobs if staff accepted pay cuts of up to 15 per cent. The framework was defeated nationally by a rank-and-file revolt. But the union leadership has continued to push versions of it at the University of Western Australia and La Trobe and Monash in Victoria.

Activists at those campuses have continued to mobilise to reject the leadership’s bad deal.

However it’s been an uphill battle. The NTEU leadership have put significant resources into running an unrelenting scare campaign claiming that voting yes to the framework is the only way to prevent mass job losses.

The leadership have won votes among union members to accept the framework with 74 per cent in favour at La Trobe and 78.6 per cent at UWA. A similar outcome is expected at Monash. All three campuses also need to hold an all staff vote to ratify the variation.

It was painfully obvious throughout UoM’s no campaign that our union leadership did not prioritise defeating the variation.

Its resounding defeat at UoM has gone for the most part unremarked upon by the leadership, because it undermines the argument they have been prosecuting on other campuses, which is almost identical to that of UoM management—accept a pay cut to save jobs.

The defeat of the variation shows the willingness of members to organise and fight for their jobs and pay, rather than accepting compromises that hurt staff.

There is a massive fight ahead on every campus, against pay cuts, job losses and the erosion of conditions. At the University of Wollongong staff have already voted to reject their VC’s attempt to cut wages in an online poll, and at ANU the NTEU branch is in the midst of a No campaign against their VC’s variation.

Now we are also facing a brutal attack from the Liberals through doubling fees for the arts and humanities. This will not only deter working class students from an education in the arts, it will decimate jobs.

The victories at UoM and Wollongong are a modest but significant step in defending the sector. The cuts on campus and the Liberals’ attacks are two sides of the same coin. The Liberals are creating the crisis and the VC’s are trying to make us pay for it. To beat them both back we need mass workplace meetings building towards demonstrations that bring together staff with current and future students. Ultimately we are going to need to challenge the anti-strike laws and flex our industrial muscle.