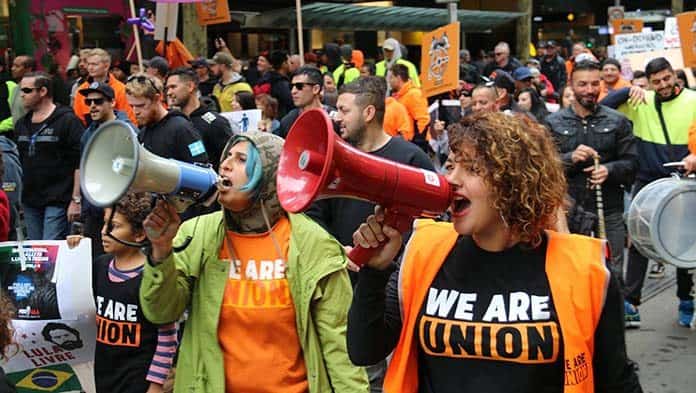 Jane McAlevey—a US union organiser-turned-academic—is growing in popularity as a source of ideas to revive the union movement in Australia.

In the National Tertiary Education Union (NTEU) for example, both rank-and-file activists and the union leadership claim to embrace McAlevey’s ideas.

McAlevey’s argument about the need for all-out strikes democratically driven by rank-and-file involvement strikes a chord with many active unionists. In her book No Shortcuts McAlevey even defines “the cause of the union: class struggle”.

She outlines a detailed, momentum-building, organising plan to build union power in workplaces: research into who holds power in an industry; mapping workplace union density and social relationships; worker-leader identification and tapping into workers’ community connections.

When all done, this provides the basis for an escalating series of “structure tests” to gauge members’ willingness to take bigger and riskier workplace actions building towards an all-out “super majority” strike.

It should be common sense that what centrally matters in rebuilding union power is how well workers organise at the coalface.

The workplace is both the source of profits and the central point of resistance to the capitalist system. Taking serious and widespread strike action has the potential to trump all other key sites of capitalist and corporate power—bosses, parliament, courts, the state and media.

At first glance, McAlevey’s approach to rebuilding the union movement appears to articulate an alternative to the dominant top-down approach to organising that prevails in our unions. Yet despite her many useful insights, tips and advice there are three reasons why unionists seeking to build rank-and-file power should treat McAlevey’s guide for action with caution.

First, McAlevey mistakenly argues that in the best and most effective unions there are not three sides (union officials, workers and bosses) but only two: workers and employers.

Why does this matter? Rank-and-file activists will have their campaigning derailed if they think McAlevey is right. Even the best unions are never simply conduits championing worker demands.

Full-time union officials face a series of pressures due to their role as brokers between employers and employees that push them in a conservative direction. Unions operate within the legal and administrative framework set by the state, so deals negotiated by the officials are struck within the industrial relations rules imposed on them.

Officials on the left can sometimes be more open to action than those on the right, but all officials are extremely reluctant to risk “their” organisation (or their careers that depend on it) to challenge the legal rules strangling the capacity for union members to strike (outside the small enterprise agreement window they’ve been allotted once every few years).

Union officials do not share the same conditions as the workers they represent. They are at one remove from the experience of workplace self-organisation that makes workers so potentially powerful.

None of the 100 or so paid staff of the NTEU, for example, are employed by a university. So, in the past 12 months, none directly experienced the day-to-day fear and anger workers in the sector faced of being kicked around by management, taking on massive workloads or joining 20,000 colleagues who lost their jobs.

Senior officials are not workers at all—occupying class positions that more align with those held by top HR managers.

There are contradictory pressures on union officials. On the one hand, their position depends on maintaining the union as an institution and the officials must keep the institution they are managing ticking over. The actual union offices (and sometimes buildings), the cars, the phones, the bank balance, their relationship with other officials, are all needed for the official to function.

On the other hand, the officials need the rank-and-file. They need a membership that pays union fees, and they need members to elect them to maintain their position.

To maintain their role as brokers, and be taken even a bit seriously by university management, officials do need to respond to the membership and represent the workers at some level.

It is this basic material and political tension between trade unions as a “movement” of rank-and-file members and as an “institution” that throws up the burning need for rank-and-file activism, organisation and leadership.

Part of the art of building strong rank-and-file activism is to be able to simultaneously work with and push union leaders to build the union’s strength and capacity to take action, while also organising independently of them when they are not willing to act for their members or are even hostile.

Breaking the IR rules by calling for a walk-out or unlawful strike—as happened last year among a group of Sydney University staff facing job losses—scared the officials because of the threat of fines that could damage the union as an institution, yet it energised members.

Rank-and-file campaigning succeeded in winning back a number of jobs. Even stronger member-led workplace organising could have pushed against the officials’ hesitancy to support the action and their insistence that the action be only called a “protest” (and not a strike) and pressured these officials to hold a university-wide mass meeting to widen the fightback. Or been able to call a university-wide union meeting themselves.

The more successful rank-and-file campaigning is, the more likely it is that officials will be pushed to support the campaign, or the rank-and-file can organise the action themselves, if that is what is needed. This strategy of bottom-up pressure is alien to McAlevey’s model.

Second, union officials are at the centre of McAlevey’s guide for action—strengthening rank-and-file power is dependent on what the union organiser does. These paid professionals are the ones tasked to develop and run the plan, to organise “their” workers to build workplace power, to facilitate the structure tests, to “train” emerging leaders, to set up big bargaining groups and to run members through their “roles”.

The experience of rank-and-file campaigning—for example, the stunning wage theft victory at Melbourne University by casual members of the NTEU—shows that McAlevey’s organising model needs to be turned upside down. The role of paid organisers has not been critical to staff winning $15 million in backpay so far—it is casual members on the ground who are initiating, organising and leading the campaign.

Third, McAlevey’s model is designed to build towards a big event, what she terms a Moment. In the United States this is either to achieve union recognition in a workplace or for an all-out strike to secure a new union contract.

For McAlevey: “The craft of organizing helps people connect the dots between the critical, solidarity-affirming moment and the larger system it challenges.”

NTEU members, for example, often take from this that the university-wide enterprise agreement disputes in the next 12 months will be their “solidarity-affirming moment” of serious strikes based on ambitious claims.

However, McAlevey’s notion of “the moment” is often used here in a conservative way to demobilise union members, by arguing that it is impossible to take any kind of action until the union is strong enough to pull off an all-out “supermajority” strike.

Recent campaigning at Melbourne University shows that linking organising with mobilising through protests and occupations involving even a small minority of members can yield spectacular results, and build union confidence and organisation to take into future fights.

The hundreds of new NTEU members at Melbourne University were inspired, energised and organised by a series of petitions, protests and occupations over very concrete industrial issues over the last two years: payment for the $135 Working with Children Check required to teach students; COVID leave for casuals; backpay for each hour of essay marking.

Workload issues were raised as a way of linking ongoing and casual staff into joint campaigns. The casuals network also supported political protests for trans rights and the release of refugees from detention.

Protests and occupations are criticised in McAlevey’s No Shortcuts—not as wrong in themselves (since, if properly built by members, they can be powerful “structure tests”)—but only where they are more commonly bureaucratic stunts rolled out from the top down that are simply “mobilising the already committed”.

The rank-and-file experience of building successful campaigns at Melbourne University shows that being ambitious in organising protests is the key. Rather than one Moment, there are multiple “moments” from which union membership and member power can be built through the interplay of rank-and-file actions and organising around a series of very concrete demands.

Postponing action until the “moment” of a protected bargaining period and enterprise agreement negotiations arrives is ultimately a limited and demobilising strategy.

Organising wage theft and casuals’ campaigns, calling for a strike even of a minority (as in the case with Medical Sciences at Sydney University) is the best way to build the strength and confidence of the rank-and-file and prepare the ground for the strike action that will be needed in the enterprise bargaining negotiations. It’s not one or the other.

The unwillingness of the officials (both state and branch) to challenge the industrial laws during the Medical Sciences dispute at Sydney University carried important lessons for the kind of organising that will be needed if the upcoming enterprise bargaining round is going to be as successful as it should be.

On each of these three issues: the nature of the union bureaucracy, the decentring of rank-and-file self-activity in favour of paid organisers, and the too-prescriptive step-by-step plan to one Moment, McAlevey is found wanting.

Building rank-and-file organisation means putting pressure on officials to support campaigns and building capacity to act independently when they don’t.

Organising from below involves protests and other actions around often small, concrete issues. It is through these moments that member power is built.