It was no surprise that some of those most overjoyed when Margaret Thatcher died were those who fought her the hardest, and suffered the most—the British miners. David Douglas, a veteran miner, at a rally celebrating Thatcher’s death, said, “Our families are insulted by the eulogising of a woman who absolutely destroyed our communities and our way of life”.

Thatcher is well-known for what she did to the miners, launching a year-long battle during which police brutally attacked the mining communities that fought back.

What is less well-known is that when Thatcher came to power, rather than open confrontation, she opted for “salami” tactics, taking on sections of the union movement one slice at a time.

Thatcher succeeded in smashing the miners only because the trade union and Labour Party leadership accepted her agenda and let her get away with it.

Thatcher came to power in the midst of a major crisis of world capitalism. Like US President Reagan (and later Bob Hawke in Australia), Thatcher’s solution was to restore profitability by forcing up the rate of exploitation through a savage pro-market agenda that has became known as neo-liberalism.

To start with, Thatcher faced a well-organised union movement—it had brought down a Tory government in 1974—which she dubbed “the enemy within”.

Thatcher wanted a bureaucratic, compliant trade union leadership that would enforce her policies for her. She was helped immensely by the “social contract” between the unions and the Labour Party before she came to power that had incorporated shop-floor unionists into bureaucratic structures, and weakened rank and file organisation. As well, under Labour the union leaders had agreed to police a limit on wages, dampening militancy and confidence to fight.

Thatcher’s attack came in stages. As millions of jobs disappeared Thatcher created a climate of fear and anxiety. Meanwhile she used piecemeal legislation to extend the powers of the courts.

She made solidarity illegal, by banning secondary action and secondary picketing, and she imposed compulsory secret ballots for industrial action.

Rather than defy these laws, the British union leaders accepted them. The risk of losing union funds and assets proved an effective threat. Then she took on the unions more directly.

First came the workers at British Leyland, a state-owned car company. Then she took on the steel workers, and then the civil servants. Then came the health workers in the National Health System (NHS), who fought back hard and won public support.

But union leaders refused to extend the strikes beyond 24 hours or beyond the health system. Then Thatcher took on the train drivers. In this case, the TUC (the equivalent of Australia’s ACTU) forced them to give into her.

The miners were left until last. Thatcher knew they would be the biggest obstacle. So she built up coal stocks, and used the Labour Party’s “incentive” scheme to divide workers by the widening the gap between miners’ pay and conditions in different regions.

When Thatcher began closing down “uneconomic pits” in 1984, however, the miners began a strike that Thatcher later admitted came close to victory.

For a year, the National Union of Mineworkers (NUM) fought back valiantly. Paramilitary police mobilisations ushered in handfuls of scabs; miners were denied social security benefits and the press waged a vicious campaign against them. 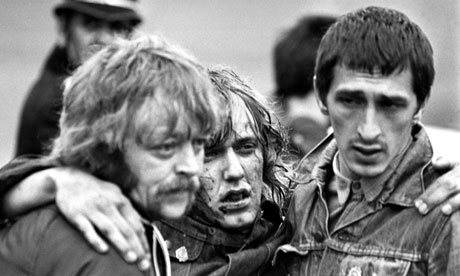 But it wasn’t Thatcher that beat the miners, it was the lack of union solidarity. Fearful of Thatcher’s anti-union laws, the TUC refused to halt the movement of scab coal and oil, or to build support for the miners.

This was despite the spread of an inspiring grassroots solidarity campaign of collections and support across the country that brought women and gays and lesbians into the struggle to defend the miners, and spontaneous actions including a national dockworkers’ strike.

After smashing the miners, Thatcher, in cahoots with Rupert Murdoch, went on to defeat the print workers at Fleet Street.

Throughout the year-long battle, the Labour Opposition leader, Neil Kinnock, refused to support the striking miners. In the 1987 election, he said Labour’s aim was to be “Thatcherism with a human face.”

Tony Blair entrenched Thatcherism inside British Labour, embracing market policies, fighting to drop any rhetorical commitment to socialism in the party platform and renaming it New Labour. He said that his “job was to build on some of the things she [Thatcher] had done rather than reverse them”.

In Australia, it was the Labor Party that implemented Thatcherism. Through its Accord with the unions, the Hawke and Keating governments cut wages and deregulated the labour market, viciously attacking those who stood up to them, like the Builders Labourers’ Federation (BLF) and the pilots.

Howard and then Rudd and Gillard have followed in their footsteps.

The legacy of the neo-liberalism and anti-union laws, and the compliant embrace of the market is something a new generation of activists and unionists are beginning to contend with. Thatcher died at a time when governments around the world are implementing vicious neo-liberal austerity measures in the midst of the biggest crisis since the Great Depression.

Thatcher’s dead, but it will take a renewed political struggle to kill off Thatcherism.