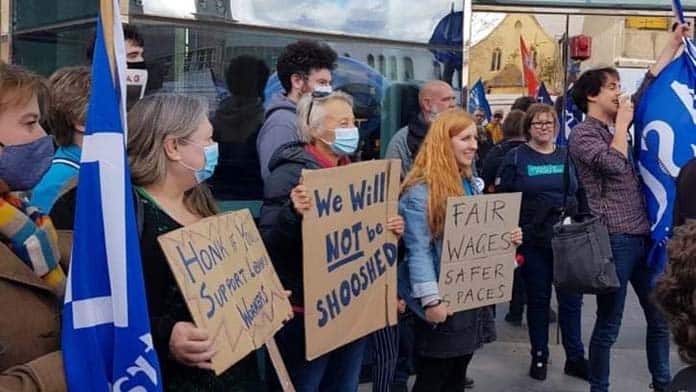 Fifteen staff from Geelong Library & Heritage Centre (also known as the Dome) walked off the job and were greeted by a rally of 150 unionists and members of the community. This included construction workers constructing the Geelong Arts Centre across from the Dome, as well as workers renovating the Gordon TAFE who came after their shift to show their solidarity with the library workers.

Speeches at the rally were fiery and drove home the point that it is workers who make the library run, and that they deserve to be paid and treated as such.

“We are the ones who run the libraries, without our labour it cannot open”, bellowed ASU member Sami.

ASU members are striking for pay equity and security. Despite being rated as the number one library in Victoria, the wages of the library customer service staff languish at 45th out of 49 libraries in Victoria, 20 per cent below that of many Melbourne libraries.

Despite this management wants to drive down wages and conditions further, using the loss of income during lockdowns as an excuse. They are proposing a wage cut, scrapping penalty rates for evenings and forcing staff to be rostered on for weekends and nights.

ASU members are fighting for a wage increase and pay at a similar rate to nearby libraries, as well as improvements to basic safety, including a minimum of two staff working at all times across all the libraries and a permanent security presence at the main library.

Building the relevance of the union

From the outset the delegates at Geelong Regional Libraries made a conscious effort to have regular union meetings, and to make them an open space where library workers could come and compare conditions, raise questions, and discuss issues that concern them, encouraging each other to take action on them. This allowed union members to meet workers in the other smaller libraries run by Geelong Regional Libraries as well as build their confidence to talk about issues at work.

It also meant they could respond when the first lockdown hit last year and the entire casual staff were stood down without pay. The size of the union meetings grew, as union members decided to campaign to support the casual staff. This led to a public campaign involving a Go Fund Me page to raise money to directly help casual workers, letterboxing leaflets asking members of the public to email councillors in protest, and a local media campaign enlisting the help of local Labor politicians.

ASU members successfully pressured the library board to give the casuals shifts as the lockdowns ended, and forced the City of Greater Geelong Council, which underwrites the Geelong Regional Libraries, to increase the library budget by $180,000 to pay casual staff. Importantly, during the June lockdown following Victoria’s second wave, casuals were provided with work instead of being stood down without pay.

The campaign to keep the casuals afloat during the lockdown helped build union membership and activist networks that laid the basis for standing up to a management offensive. After negotiations stalled for five months, library management tried to push through a non-union agreement with mandatory briefing sessions, weekly emails and threats of even more severe pay cuts and redundancies if they voted against it.

Fresh from this victory, the union delegates then called a mass meeting where members voted to condemn management’s “bullying behaviour” and voted unanimously to ballot for protected industrial action.

Most people working in the library had no experience taking industrial action. So the first action that workers took involved wearing badges. This simple act of solidarity helped build trust between staff and helped break the fear of victimisation from management.

“At the union meeting after we distributed the badges, one of the union members who were most worried about taking action told the meeting how relieved they were to see everyone wearing the badges and while it was nice, it didn’t do much and we need to do more”, said ASU member Sami.

Staff also started leafleting library patrons about their campaign. The overwhelmingly positive reactions from the members of the public helped dispel any feelings of guilt management tried to sow, and boosted their resolve to fight for a fair agreement.

“At first I was worried about leafleting the public about our own pay but once I started to get positive reactions, it really gave me confidence in what I was doing“, said ASU member Darcy.

Library staff are now discussing how to step up the action, with several different types of work bans, including a ban on processing returns, being discussed.

However, closing the gap in wages will require nothing less than ongoing strike action.

Winning greater public support to build morale and resolve and strengthening the relationship between City of Geelong council workers, and the workers renovating the Geelong Arts Centre and the Gordon TAFE, will also be crucial to winning the fight.

By an ASU member