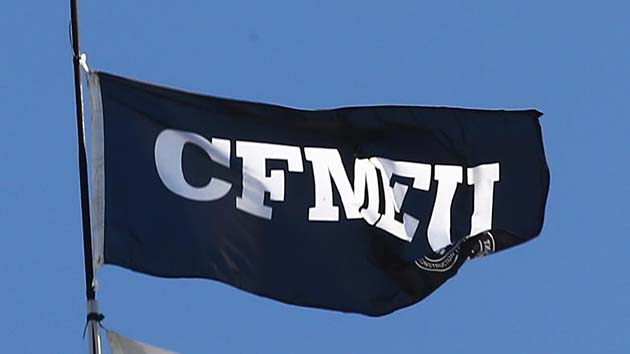 The announcement of “more stringent” guidelines by the Australian Building and Construction Commission (ABCC), banning union signs and the Eureka flag from display on building sites has sparked a wave of flag-flying defiance. Many other workplaces have also held flag-flying events in solidarity with the CFMEU.

The new directive bans not just large union flags or stickers on building sites. “The presence of one of these items”—a single sticker or slogan on a hard-hat or uniform—is enough to breach it.

It spelled out a list of banned slogans, including, “100 per cent union”, “union site”, “no ticket, no start”, “no freeloaders” and “’scab’, ‘rat’, ‘grub’ or similar to refer to employees who choose not to participate in industrial activities, such as joining a union or being represented by a union”.

Understandably, the directive has sparked a spontaneous wave of defiance. Last year Watpac in Brisbane tried to tear down union flags and CFMEU posters on noticeboards, saying it needed to be Code compliant. In October the ABCC wrote to Watpac and Probuild warning them to take down union flags and material on sites. But the Commission has subsequently backed off, according to The Australian.

But instead of making it clear this is an attack on union flags and material, the union leaders have chosen to focus almost solely on defending the Eureka flag. But it is not an unambiguous union flag.

The CFMEU says it is, “a flag that represents a struggle for democracy and fairness”, given its use at the Eureka stockade in 1854 and its more recent appearance in union struggles.

Navy uniforms on the HMAS Ballarat also feature it. A version of it was used at the race riots at Lambing Flat against Chinese migrants in 1861.

Nationalism undermines the working class unity needed to build strong unions and fight the bosses. It underpins the racism directed at Aboriginal people, migrants and refugees.

The defiance of the ABCC directive shows there is a willingness to fight, but our strength is best demonstrated by flying the banned union flags, representing the real class unity that can break their bans and their anti-union laws.