Fires and record heat waves have once again driven the reality of climate change back into focus. The record temperatures across Australia have made headlines around the world. Any idea that Labor’s carbon tax was an effective measure against climate change has gone up in smoke.

Rather than cut emissions and build solar and wind power stations, the carbon tax scheme has boosted the profits of some of the dirtiest coal fired power stations in the country. Two of Victoria’s dirtiest power stations, Hazelwood and Yallourn, actually received payouts of $266 and $257 million respectively in the middle of 2012.

Direct government investment in renewable power is going to be needed to do anything substantial about climate change—but Gillard is as far from taking action as ever. A modern-day Nero, she praises the firefighters and sympathises with those who have lost houses, but simply watches as Australia burns. 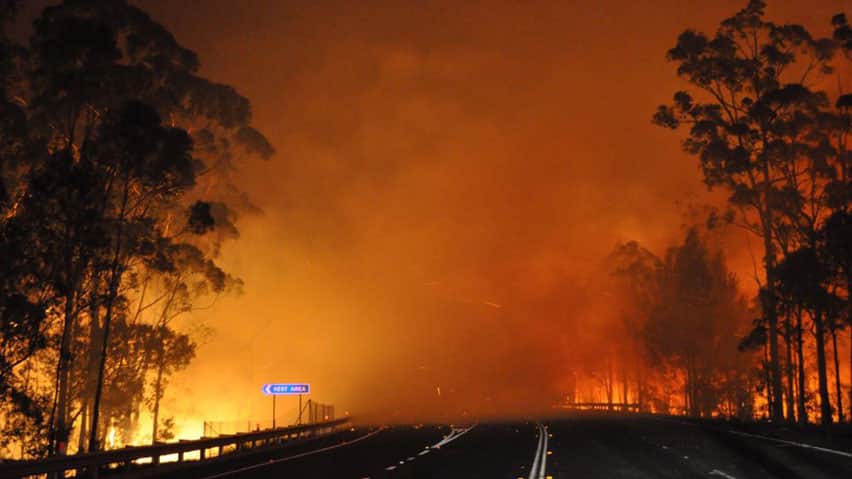 Just before Christmas, economic reality finally forced the Labor government to abandon its neo-liberal commitment to a budget surplus. Yet it has quickly become obvious that it has not abandoned its determination to drive through spending cuts. Treasurer Wayne Swan insists he won’t be “loosening the purse strings”. Worse, he, “wrote to ministers after Christmas asking them to find spending cuts in order to fund new priorities”, according to economist Peter Martin. The government is demanding even positive measures like increasing education funding and the National Disability Insurance Scheme must be funded through cuts.

1 January marked the day that 84,000 single parents were pushed onto the dole, cutting their benefits by up to $110 a week. To add insult to injury, the government didn’t notice for weeks that Centrelink had wrongly ordered single parents to destroy their concession cards, meaning many have missed out on weeks of concessions just as their income was chopped back.

Minister Jenny Macklin arrogantly defended the cut, claiming she could live on the pathetic $35 a day of the NewStart allowance. As if! Just the cost of renting a one-bedroom flat in her upmarket Melbourne suburb of Ivanhoe is $270 a week.

In the face of outrage at the absurdity of her claim and growing demands that the dole be increased by $50 a week, Macklin apologised a week later. But not before the full meanness of the federal Labor government was publicly displayed.

Rightly, The Greens have called for the government to fund an increase to Newstart by raising the mining tax. Iron ore prices are on the way up, but according to The Australian, the big mining companies BHP Billiton, Rio Tinto and Xstrata haven’t had to pay a single cent under the tax in its first six months.

Rather than tax the rich and the super profits of the mining companies or the banks, Labor would rather make the poor pay. They have given us a version of the austerity policies that are wreaking havoc across Europe and the US. Labor cut 5400 jobs in the public sector last year, according to the federal public sector union.

Unemployment crept up in December and 1200 job cuts were announced in just a few days in January at BlueScope Steel, Boral, and Vodafone. Job vacancies in the public sector are at their lowest level since 2004.

The slowdown in mining investment means there are fewer jobs in construction and engineering. As Allan Mitchell wrote in the Financial Review, “The Lucky Country is about to get a tiny taste of how the other rich countries now live.”

We’ll also need a taste of the resistance that is sweeping countries across Europe. Gillard blamed Queensland’s Liberal premier Campbell Newman’s job cuts for increasing the national unemployment figures, but Newman has only got away with it because neither Labor nor the trade union leaders have been prepared to call the strike action that can stop him.

But workers in Portugal, Spain, Italy and Greece walked out together on a coordinated general strike for the first time ever last November. In Spain and Greece workers have occupied and struck against privatisation in hospitals, the railways, local government and the postal service.

Occupations have stopped 500 housing evictions in Spain since the beginning of the economic crisis, and locksmiths in northern Spain are boycotting evictions for people behind on their mortgages.

As the election approaches this year, the horrifying threat of a Tony Abbott government will be used to try to convince people to go quiet on fighting Labor. But going quiet would be a disaster. It’s Labor’s own right-wing policies that have put Abbott in an election winning position.

A fight back is needed here too, a fight for jobs and services, for real action on climate change, and a fight to stop Labor’s pro-business austerity measures. Increasing corporate tax could find all the money needed to fund the National Disability Insurance Scheme, boost education funding, a national dental scheme and a serious move to renewable energy. It means a fight against business as usual and the priorities of a system that is run for profit not for human need.