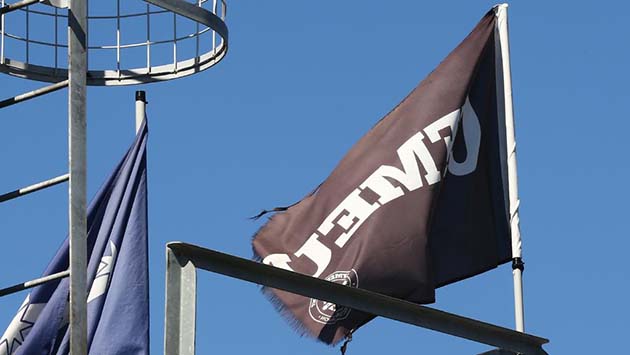 For three days, Watpac bosses in Brisbane tore down CFMEU flags and posters on building sites, but stop work action has kept the union flag flying on the job.

Union flags had been a feature of the Watpac sites but in early May, every night for three days, the bosses tore down the posters and each day the delegates would put up twice as many.

The company claimed that its sites had to be “code compliant” to meet the new requirements of the Australian Building and Construction Commission (ABCC), the anti-union watchdog re-established by the Turnbull government.

Under Turnbull’s news laws, if a company wants to tender for government work, all enterprise agreements involving the tendering company will have to comply with a new code, on every job, even non-government ones. Under the code, set down by the ABCC, workplaces are banned from displaying union flags and posters. Even union stickers on helmets are outlawed, along with clauses restricting cowboy labour hire companies undercutting site agreements, among other requirements. It is a way of trying to drive down conditions and restrict the union throughout the industry.

Things came to head on 9 May. Workers at Watpac Newstead Series site arrived to find the union flags gone again. At a meeting outside the gate, they took a vote, “No flags, no work.”

At the Watpac Mary Street site, similar action was unfolding. “It was all over in five minutes,” one worker told Solidarity. “We told them, ‘no flags, no work’ and the flags went straight back up.”

At Newstead, however, one crane driver sided with Watpac. For a couple of hours workers stayed on the grass. Then the whole worksite waited and watched as the flag went up on the hold-out crane.

In New South Wales, Watpac sites have always been flying the union flag. But in Queensland the company has been more actively anti-union. It turned out that the company was lying when it told the workers that the company had to be code compliant. It is only after 31 August companies have to be “code compliant” to be eligible for government contracts. But it is a taste of things to come.

Defiance of the law at Watpac kept the unions flags flying. That’s the kind of fight that will be needed to defeat the ABCC and the code right across the industry.

The CFMEU have called a national stop work rally on Tuesday 20 June against Turnbull’s war on workers, more details to be announced.