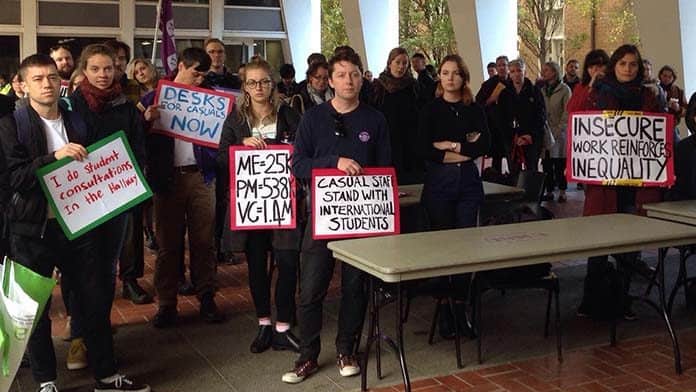 A rally of around 100 staff at Melbourne University has forced management to cave on two key demands of casual staff.

The rally on 8 May was organised by the Casual Staff Network, a group of NTEU members at the university on casual and sessional contracts. The group was formed earlier in the year to organise around casual rights and to fight for permanent jobs.

The rally was called in response to management’s decision to reimburse all staff except casuals for the compulsory Working With Children Check. As we planned the rally new issues emerged that had to be addressed, including management’s announcement that casuals would have their emails cut off between contracts. In the end the rally demanded that:

Around 100 people attended, most of them casuals but also a number of permanent staff. The mood was fierce and defiant. People were particularly excited to hear from an NUW organiser from Chemist Warehouse speak about their own successful fight for permanent jobs.

Towards the end of the rally HR contacted the NTEU branch president and caved on our first two demands. They back-tracked on the casual email cut off, and the Working With Children Check will be reimbursed for all casuals in 2019. This will cost the University around half a million dollars. That’s half a million dollars they expected to come out of our pockets—but  thanks to determined organising by casual workers we handed the bill right back to them.

Casuals at Melbourne Uni were looking forward to the end of the Liberals. Labor had made some big promises around casual conversion to permanent jobs. But it was always going to take organising on the ground to make sure these promises came through.

Now, facing a Morrison government we have no choice but to fight. Reimbursement for the Working With Children Check wasn’t guaranteed in our Enterprise Agreement, and there was some reluctance from the branch leadership to take up the issue, who pointed to the fact that making casuals pay for the Working With Children Check was common at other Victorian universities. But we organised, we rallied and we won it.

We’ll need to do the same to stop the blatant wage theft each semester at marking time, to fight for conversion to full research and teaching positions and to organise to join the climate strike in September.