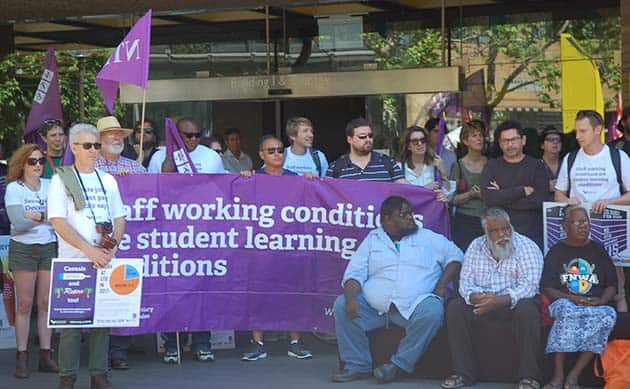 Our campaign has centred around job security. At UTS, 77 per cent of staff are employed on casual or fixed term contracts. But not only have management refused to deal with rampant insecure work, they are also seeking to take away existing conditions such as provisions for Scholarly Teaching Fellows (STFs) won in the last agreement. These are one of the few existing routes out of insecure work for academic casuals.

Staff held pickets at all major entrances—no small feat for university with over a dozen major buildings with several entrances each. Some groups of staff organised picket rosters within their own Schools. The campus was far quieter than usual; one security guard told picketing staff that student traffic was down 70 per cent.

Ruby, a casual professional staff member, told Solidarity that she was on strike because “It sends a message of power to management… It’s been great to be here and feel you’re a part of a movement that’s fighting for something better.”

Claims for casual staff that the union is pursuing include sick leave and 17 per cent superannuation, as well as increases to pay for marking for academic casuals. University representatives claimed in a bargaining meeting that staff like the “flexibility” of casual employment—but like their other claim that permanent staff are “rorting” sick leave, they are yet to produce any evidence.

Ruby explained, “For me, the sick leave for casuals is really important. This flu season, I had a terrible flu and I was off for a week, I didn’t know how I was going to pay the rent.

“It’s my first time [on strike] … I work in a really small team of five people, and we only have one permanent staff member, the rest are casuals. I’ve been told I’m let go from that position. It has been a year of constant stress, I haven’t known if I’ll have a job next year. We’ve had budget cuts, staff cuts.”

The decision to strike was taken at a stop work meeting on 4 October. A Branch Committee motion proposed some forms of industrial action—but no strikes. An amendment for the 24-hour strike drew enthusiastic support, and was adopted and supported unanimously. While some were worried that academic staff might be unwilling to strike in the last teaching week, the strike was the best-supported UTS has seen in several bargaining rounds.

There is much anger amongst staff over heavy-handed management, workloads, increasing casualisation, and constant restructures. The union has continued to grow rapidly, with 50 new members signed up in October alone. The strike has given the campaign a huge new profile, and forced widespread discussion and debate.

An academic in the Science faculty explained, “I’m on strike today because in the last 30 years I’ve been here, the quality of education has been deteriorating… I believe that now is the time to strike, or it’s just going to get worse.

“How do casuals pay their rent, eat, have mortgages, without a secure job? I find it appalling. I am lucky enough to be at the end of my career, but many of those young people don’t seem to have a future at all. That’s what scares me.”

Hundreds of staff joined a lunchtime rally to conclude the pickets. NTEU members from Sydney University, including members of the casuals network, boosted the UTS picket lines and the rally. Western Sydney University also held their own half-day strike on the same day.

Both the Maritime Union of Australia (MUA) and the CFMEU also demonstrated support. Rita Mallia, CFMEU NSW President, urged UTS staff to join the Unions NSW action to “change the rules” and get rid of the anti-union ABCC on Wednesday 16 November.

The protest presents a great opportunity for UTS staff to take further industrial action, and help build the campaign against our restrictive industrial laws. This takes on a new significance now that the “Fair Work” Act has been used to suspend the agreement at Murdoch University, and plunged staff into uncertainty about the future of their pay and conditions.

In an email to all staff on the eve of the strike, the University’s Provost suggested that UTS and the union would compromise to reach agreement. But while the university has yet to budge, staff are already compromising. According to a union survey of nearly 1200 staff, casual staff are working between 3-10 unpaid hours per week, and 75 per cent of permanent staff working longer than their salaried hours.

The university can afford our claims. It has a $72m surplus, and a Vice Chancellor, Atilla Brungs, who made $985,000 last financial year—meaning he takes home the average yearly income of a casual in under a fortnight.

Staff are certainly going to need to take further action to win. As well as the proposal to strike on 16 November, the branch has discussed imposing partial marking bans and disrupting the University open day on 16 December. All these actions combined can demonstrate who keeps the university running smoothly, and help bring management to heel.

Winning our claims at UTS is part of putting job security on the map at universities around the country. If we continue to show the determination we have shown in our campaign so far, we will win important gains. Ultimately, it is up to the union membership to make sure this is what happens, and that we do not settle before we are able to make real gains.