Turnbull’s budget for business and the rich 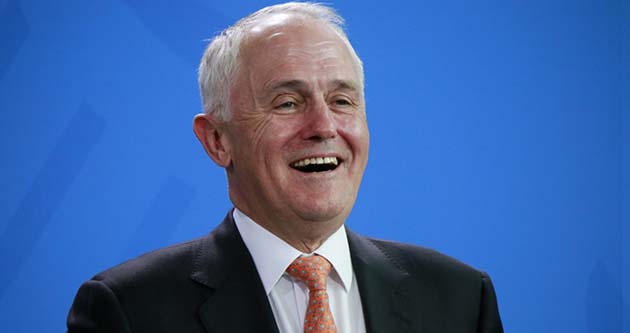 Turnbull has delivered a budget for business and the rich. Its centrepiece is handouts to business and high income earners. Most workers get nothing, except the impact of further cuts to services.

Everyone earning over $80,000 a year, including those on million dollar incomes, will get a tax cut. Only the top 25 per cent of tax-payers will benefit.

The tax increase on those earning over $180,000, introduced two years ago as a “deficit repair levy”, is also being reversed. Close to $8 billion over four years that could have gone into schools and hospitals is being sacrificed.

Alongside that are tax cuts for business. The Liberals are trying to cover themselves by saying these will go to small business first. But they are also sneaking in a hefty tax cut for big business over the coming years, as the tax cuts are extended to larger and larger companies over time. Over ten years big business will get a sizeable tax cut from the current 30 per cent to 25 per cent.

The Liberals want us to believe that handing back money to business will see it trickle down to workers. That is the substance of the government’s grand plan for the economy. But many of them will just pocket the money and run.

The government is raising more money through cutting back on superannuation concessions for the rich and corporate tax evasion. But the outcome is modest—more for show in the lead up to the election than any serious attempt to tax the rich. The superannuation changes will claw back $2.9 billion over four years from high income earners. But there are $12 billion every year in concessions going to the top 10 per cent of income earners alone.

The same is true of corporate tax evasion. Apparently the best the government can do is raise an extra $1 billion a year. Yet the tax office’s own Corporate Tax Transparency Report released late last year told us more than one in three big companies were not paying any tax at all!

Treasurer Scott Morrison says that higher spending is “unsustainable”. But his priorities are clear. All up the government is handing back $13.3 billion in tax cuts. This is more than three times that the government is prepared to put back into schools and hospitals.

Turnbull’s funding increases restore just over 25 per cent of the money Abbott cut from schools and a third of what he cut from hospitals between now and 2020. This is less a funding increase than an election fig-leaf. The bulk of Abbott’s $80 billion in cuts will stay.

The schools funding increases recommended by the Gonski review weren’t simply a wish list. They were designed to address concentrated disadvantage and inequality in the school system. But the Liberals have no interest in properly funding schools in poor and disadvantaged areas—as Turnbull showed when he speculated that it might be better for the federal government to get out of funding government schools altogether, and just go back to looking after private schools.

But as usual there’s plenty of money for war. Australian participation in the wars in Iraq and Afghanistan get an extra $666 million. The total boost for defence is just short of $1 billion, taking its budget to a whopping $32.3 billion next year.

Despite the talk about delivering jobs, the government is cutting more jobs from the public service. An increase in the so-called “efficiency dividend”, keeping it at 2.5 per cent next year, will mean 3000 to 4000 more job cuts in the coming years according to the federal public service union, on top of 18,000 already gone. Immediately, the Department of Human Services will lose 800 jobs, 300 will go at Immigration and another 344 from Social Services.

The cuts to Medicare pathology services, including blood tests, x-rays and pap smears, have been retained. The Medicare rebate has been frozen again, meaning more doctors will stop bulk-billing and charge co-payments. Aged care has taken a $1.2 billion cut.

University students have been given a one year reprieve from higher fees. The government is now proposing fee deregulation only for prestigious “flagship” courses, but also plans to increase HECS fees across the board from 2018. The 20 per cent funding cut, which universities will be told to make up for with fees increases, remains in the budget from the beginning of 2018.

Morrison’s internships scheme, which he labelled “real work for the dole” will allow business to exploit the unemployed as free labour and churn them through short placements. This is more likely to destroy jobs than create them, as the government has suggested the internships could just be work in newsagencies, cafes or supermarkets. The unemployed will get just $4 an hour extra from the government for the work.

And there are many other smaller, nasty cuts like $115 million cut from homelessness services and $40 million from community legal centres.

Labor is promising to retain the higher spending on schools and hospitals that it promised before the last election. But Shadow Treasurer Chris Bowen has also attacked the Liberals for “fiscal recklessness” and having “lost control of the deficit”. This implies that Labor would also cut spending.

But after Turnbull’s pathetic effort, the need to seriously tax the rich to fund schools and hospitals is clearer than ever. This budget should brand Turnbull as the champion of big business and the rich—and help make sure he’s booted out at the election.