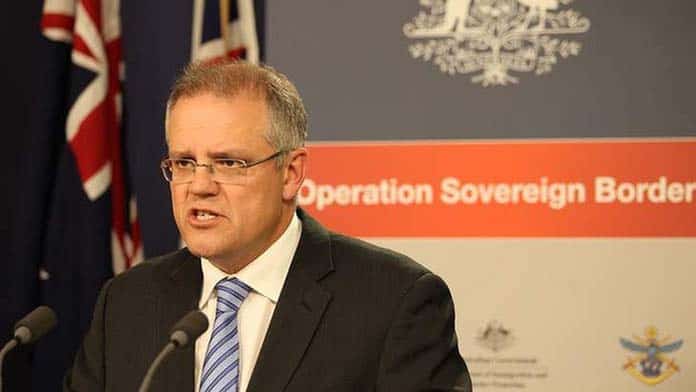 Malcolm Turnbull has been toppled and Scott Morrison installed as Prime Minister. But Morrison’s election won’t change anything. The Liberals are in turmoil.

Forty Liberal MPs voted for Peter Dutton, representing the hard right of the Liberal Party. Dutton and Abbott will continue destabilising the Coalition. What Turnbull called “a right-wing insurgency” will continue.

Dutton has pledged “absolute loyalty” to Morrison. What a joke. The climate deniers and union and refugee bashers in the Liberal Party still hope Dutton will lead the party. But a section of the party and the Australian ruling class think Dutton is unelectable.

The Coalition are tearing themselves apart as they face a looming wipeout at the next federal election.

Some people will breathe a sigh of relief that Dutton was defeated. But Morrison won’t be fundamentally different. His reputation is forever blackened by his time as Tony Abbott’s Immigration Minister. He presided over Operation Sovereign Borders and the deaths of Reza Berati and Hamid Khazaei on Manus Island.

As Treasurer, he pushed tax cuts for big business.

Scott Morrison is not going to save the Coalition. More likely they will continue to slump in the opinion polls.

The Coalition government has trailed Labor for 38 consecutive Newspolls as the Liberals have presided over record low wages growth while defending the big banks. Turnbull still brags about re-establishing the anti-union ABCC.

Morrison is just as committed to big business and the rich as Turnbull. He voted in parliament to cut penalty rates. He opposed same-sex marriage and wants to allow increased discrimination against LGBTI people in the name of “religious freedom”.

Like Turnbull, Morrison was willing to drop any commitment to a carbon emissions target in the National Energy Guarantee and abandon even the pretence of action on climate change.

The Liberal Party is the party of big business in Australia. Turnbull and Morrison have been in lockstep supporting the big banks.

In desperation Morrison and the likes of Dutton will ramp up the racism, and throw everything at trying to hold on to the Liberals’ right-wing base.

The Liberals went hard in the recent Longman by-election attacking Labor over refugees and immigration. Yet there was still a 9.4 per cent swing against the Liberal National candidate on primary votes.

We can expect more attacks by the Liberals on the Sudanese community, migrants and refugees. Their mainstream racism will continue to encourage One Nation and the far right.

Let’s finish them off

Bill Shorten and the Labor Party must stand against the Liberals’ racism and division. Labor’s support for offshore detention of refugees on Manus and Nauru has allowed their racism and scapegoating to go unchallenged. When Labor says temporary work visas are “out of control” it also strengthens the racist myths about immigration causing unemployment.

We should not just wait for the election. Now is the time to step up the protests, demonstrations and strikes. We need to strengthen the rallies calling to evacuate Nauru and Manus Island and bring the refugees and asylum seekers to Australia.

The Coalition might be divided but they agree about attacking workers’ rights. The Change the Rules campaign is more important than ever to put this at the centre of the political agenda. The CFMEU and MUA in New South Wales (backed by Unions NSW) have called a stopwork rally on 6 September, to take the fight to the Liberals and the bosses. Unions in every state need to follow their lead.

The Liberals are in turmoil. Action now can push back their racist and anti-worker agenda, and finish them off.