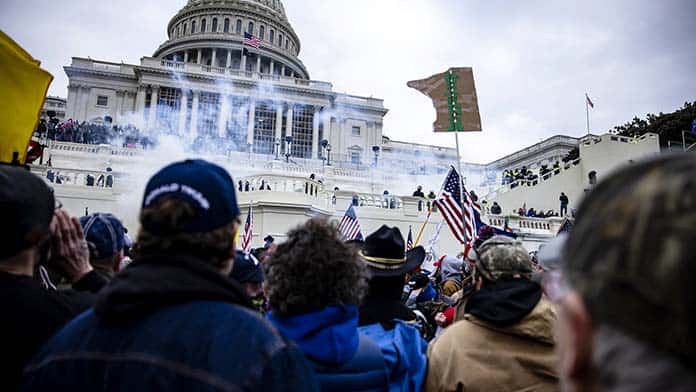 Hundreds of Trump supporters have stormed the US Capitol building, forcing Senators and Representatives to flee. Some pro-Trump protesters were reportedly armed, and one person was shot and killed by police.

Trump supporters invaded the empty House and Senate chambers and trashed offices including that of Democratic Speaker Nancy Pelosi.

On the day the election result was scheduled to be certified, Trump had called on his supporters to descend on Washington for what he said in advance would be a “wild” rally. Earlier on the day he spoke at a protest of thousands of supporters.

President elect Joe Biden denounced it as an attempt at “insurrection” and said “our democracy is under unprecedented assault”.

Many have noted that Black Lives Matter protests have faced far firmer policing, and would never have made it into the building.

As the national guard was mobilised and protesters were cleared out, despite Trump’s initial delay in calling them, he issued a video urging them to “go home”, while continuing to deny he had lost the election. He even defended the protests, tweeting, “These are the things and events that happen when a sacred landslide election victory is so unceremoniously & viciously stripped away”.

Trump is not going to overturn the election result or hold onto power. But neither are he or his supporters going away.

He told the rally on the day he would “never concede” and that the election had been “stolen by emboldened radical Democrats”.

His actions are further radicalising a hard core of supporters, who will view Joe Biden’s presidency as illegitimate and some kind of threat to the country.

This sets the stage for further right-wing protests against Biden’s every move in office. There were similar right-wing mobilisations under Obama’s presidency through the Tea Party movement.

But Trump has spent the last four years encouraging white supremacists and the far right at every opportunity. Trump is not a fascist himself but he is creating an environment where these groups can grow.

There is the potential for the emergence of much more powerful fascist and far right groupings in the US.

US politics has become increasingly polarised as a result of decades of increasing inequality and desperation for sections of the working class, following the ruling class offensive and the introduction of neo-liberalism.

The renewed surge in COVID-19 infections has seen unemployment climb again, with over 800,000 people a week filing for unemployment benefits in December.

A radical program to fund jobs and support workers’ living standards is urgently needed, with the economy expected to take years to recover.

But the political establishment, both Republican and Democrat, have consistently governed for the rich. Joe Biden is another centrist politician who is not about to break with this approach.

He spent his whole election campaign distancing himself from the left-wing of his party and rival Bernie Sanders, rejecting policies like Medicare for All and a Green New Deal.

Disappointment with the Democrats will provide further opportunities for Donald Trump and the far right to take the offensive.

Trump and the far right can be driven back.

In the aftermath of the white supremacist mobilisation in Charlotesville in 2017, far right protests across the US became impossible, after tens of thousands mobilised for counter-demonstrations against them whenever they tried to meet.

Building such a movement on the streets is the key to both stopping the right, and to constructing a socialist movement independent of the Democratic Party capable of fighting for working class demands that challenge the power of the rich.

Why did 73 million vote for Trump?