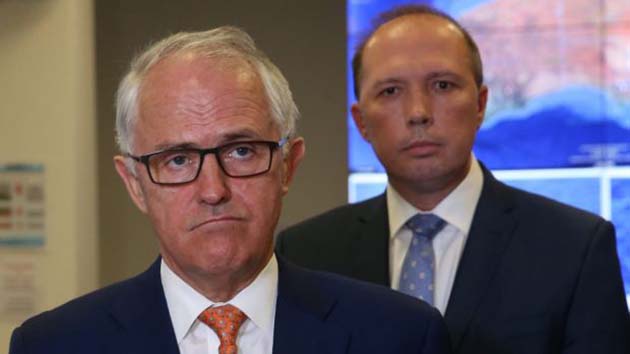 In a further slide to the right, Malcolm Turnbull has announced the end of 457 visas, a move celebrated by racist Pauline Hanson as the work of One Nation. The government is scapegoating temporary migrant workers for unemployment in an effort to win back One Nation voters and present itself as “protecting the borders”.

The move to scrap 457 visas seems to be just the beginning of Turnbull ramping up racism around immigration, with the Financial Review reporting he will also impose restrictions making permanent migration “provisional” on new migrants demonstrating a commitment to “Australian values”.

Turnbull even explicitly linked the move on 457 visas to the Liberals’ efforts to keep out refugee boats. He is imitating the racist nationalism of US President Donald Trump, who issued a similar order restricting temporary work visas in the US the very same day.

Tragically Labor leader Bill Shorten has responded by ramping up his own xenophobic campaign, calling the changes a “con-job” and declaring that, “we’ll still be bringing in cooks, builders, bakers and hairdressers from overseas to do jobs that Australians should be doing.”

The Labor Party and union campaign against temporary visas has presented overseas workers as a threat to “Aussie jobs”. But immigration does not cause unemployment. The real threat to jobs comes from corporate profiteering. Transport giant Toll announced 200 job cuts in February, and thousands of jobs have gone in mining. This were not caused by migrants but companies trying to boost profits. Turnbull wants to cut even more jobs from the public service.

It is the bosses and the Liberals cutting penalty rates and attacking conditions for construction workers through new anti-worker laws, not 457 visa workers.

English language requirements will also be increased for the “medium term” visas and a mandatory criminal check imposed. These changes seem to have no rationale apart from fanning racist prejudices against migrants.

The changes will make workers on temporary visas dependent on their employer for longer, by lengthening the period before they can apply to stay permanently. This makes them more vulnerable to exploitation. The best way to stop any exploitation is to welcome foreign workers into the unions, and to insist that temporary visa workers have the right to stay permanently and the same rights as permanent migrants.

There have been very positive examples of unions fighting against the exploitation of workers on temporary visas. Unions like the CFMEU and AMWU have done good work organising 457 workers.

That is the kind of united fight we need. Claiming foreign workers take jobs from locals only serves to divide the workforce, and gets in the way of a real fight for jobs against the bosses.

Instead of trying to out-do Turnbull’s attack on foreign workers, Labor and the unions should stand against the racism, stand up for the rights of migrant workers and start a real fight against the Turnbull government.