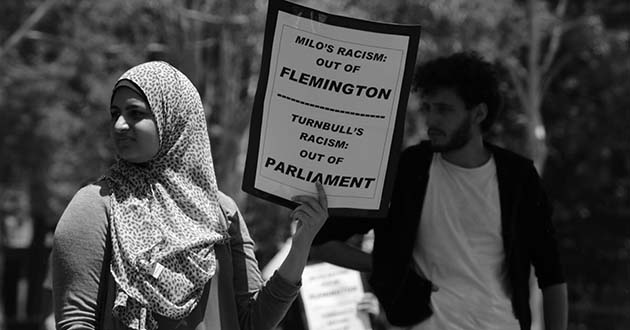 A fantastic 250-strong crowd, including 60 local residents, faced down police threats to rally against racism and police violence at the Flemington public housing estate in Melbourne on Sunday.

The rally was called in response to a brutal attack by riot police on residents, following a speech by far right extremist Milo Yiannopoulos in the adjacent Melbourne Pavilion two weeks previously.

For hours after the Milo event, police had protected fascists yelling racial abuse at the mainly black and Muslim residents at the estate. Then police went on a rampage through the flats, chasing young people, trying to force their way into homes and attacking residents indiscriminately with batons and pepper spray late into the night.

In the wake of the attack a community meeting called by local activists with Greens MP Adam Bandt documented numerous injuries. The meeting also showed both the depth of anger at police in the flats and a willingness to fight back. Mothers and grandmothers spoke about the constant racism they face and said they felt they had brought their grandchildren to Australia only to be “hunted” by the police.

Along with Bandt, speakers at Sunday’s rally included Greens state MP Lidia Thorpe, an AEU delegate from the local school and a representative from the Islamic Council of Victoria.

The rally condemned the Islamophobia being pushed by the Turnbull government and the demonisation of African youth by the Labor government in Victoria.

Sajda Yaqub, an advocate from the Flemington Kensington community legal centre, told the rally that the police attack was part of a long history of racist harassment of residents at the Estate, “we have documented proof that in this community police continue to racially profile us based on the colour of our skin or what we bear on our heads.”

Jonathan, a teacher from the local school said, “some of our students were capsicum sprayed and we’ve heard the stories about children being chased across the estate… it was 1.30 or 2.30 before some students could get to sleep that night… At our union meeting this week, people expressed their shock and outrage. We want to express our solidarity with the local community.”

It was a victory the protest took place at all. Police had spent the entire week running a disgraceful fear campaign to try and shut it down.

There have been previous initiatives in Flemington aiming to document and challenge police racism, including a legal challenge to racial profiling in 2013, but this was the first call for a public demonstration.

As soon as the rally was called, police held their own meeting with more conservative community leaders and threatened more violence if the rally went ahead. They said the rally organisers would be charged and fined. They argued the rally slogan “Black Lives Matter” was an incitement to violence and should be dropped from public messaging. Police contacted the local school and pushed them to tell students not to attend—a message delivered at assembly by the principal.

At a further community meeting on the Thursday before the rally police gave a presentation pushing more threats of violence. That morning, the local Labor MP Danny Pearce released a video on Facebook telling people not to go to the rally, saying it was “unsafe”. The Department of Housing also scared and warned residents not to attend. “Outside agitators” were blamed for initiating the rally.

I helped to organise the protest along with local community organisers Mukhtar Mohammed and Mahir Muhammad. We worked to counter these threats by building broad support and insisting the rally would not be provoked by police or fascists. The endorsement of the Islamic Council of Victoria and trade unions like the NTEU helped build confidence. We refused to sign an “Expectations of Rally participants” agreement demanded by police.

The scaremongering was condemned by speakers at the rally. Lidia Thorpe, newly elected Greens MP and the first Aboriginal woman in the Victorian parliament, told the crowd:

“I know what it’s like as a black person to be intimidated when you are trying to stand up for your rights. When your children are put at risk by the people that are supposed to be here to serve and protect is an absolute disgrace… We can’t stand down. We must keep fighting for what is right. For those who have been told not to be here today, just know that we are all with you.”

The rally was a demonstration of the kind of unity and defiance needed to confront the racism intensifying under both Turnbull in federal parliament and Daniel Andrews in Victoria.

Sajda Yaqub called for continuing resistance, “We want freedom from historical oppression and stigma because we are Muslim, because we are black, because we are different. I can assure all the authorities that we will never stop fighting.”