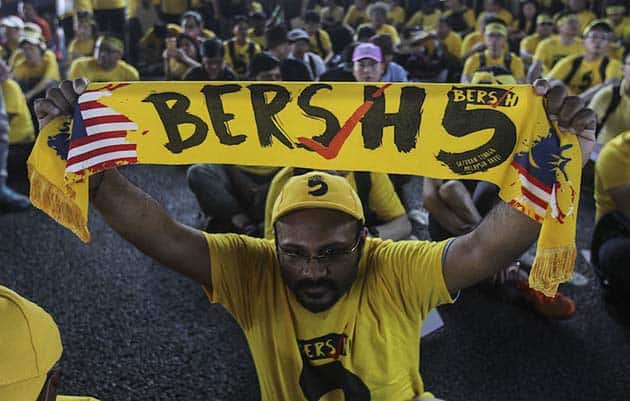 Tens of thousands joined the latest Bersih march in Malaysia over the weekend. The Bersih rallies, as well as solidarity actions in Australia and across the world, are a powerful demonstration for the basic democratic rights denied to Malaysians.

But Bersih has also become about much more over the five years of protests. It is a demonstration against the inequality and corruption at the heart of Malaysia’s Barisan Nasional (BN) ruling coalition, which deprives millions of people of basic work rights and social services.

The ruling BN is rotten to the core with corruption. Prime Minister Najib has made a mockery of reform, continuing racist policies and rhetoric under 1Malaysia, and pretending to repeal the country’s arsenal of anti-protest laws when he has only renamed them. The question is no longer whether Najib is a thief, but how much he stole and to what lengths he has gone to hide it. He and his cronies must be removed, as must the rest of his Malay supremacist party.

However, the opposition “Save Malaysia” coalition is not the answer. Dr Mahathir, former Prime Minister, is the de facto face of the coalition. He is responsible for many of the financial and political treacheries that continue to torment Malaysians today. He had zero tolerance for political dissent under his own rule, and he has consistently been a vicious Malay supremacist.

Mahathir has split from the governing party UMNO to form BERSATU. But his new party is also openly Malay supremacist and politically identical to UMNO. He has shown no sign of remorse for any of his past actions and beliefs, and there is no reason to believe that BERSATU would be fundamentally different to UMNO if it took power.

The other main component of the opposition coalition, Pakatan Harapan (PH), is also deeply flawed. It is a partnership of convenience where fundamental differences in policy and ideology lie just beneath the surface. Component parties such as PKR and DAP have rightly been staunch critics of the government and have pushed for reforms. But recent experience in the states of Penang, Perak and Selangor show that they are not immune to corruption.

More worryingly, PH members, who form the bulk of the new Save Malaysia coalition, have willingly allowed Mahathir, who was responsible for arresting opposition MPs while Prime Minister in the 1990s, to lead it. This is a defeatist approach that claims that no change can happen without teaming up with the ‘lesser’ evil. The opposition continues to have a habit of defining itself as simply being against the current government, with little emphasis on a programme of change or the grassroots organisation needed to make that happen.

We need to continue to build political organisation and movements outside of the involvement of Opposition coalitions to challenge the crony capitalism of Najib and UMNO.

The victory of Donald Trump in the US shows why it is so important to fight attempts to use racism to distract and divide the working class, and why we need to consistently fight racism wherever we find it.

The ruling coalition relies on racist policies of divide and rule to placate opposition to its endemic corruption and denial of civil rights. The “special position” of Bumiputeras, largely Malays, is written into the Constitution. The large population of poor rural Malays at independence was used to justify this. But government has never had the interests of poor Malays at heart.

Discriminatory “affirmative action” policies have been in place for almost 50 years supposedly to benefit the Malay population, yet rural Malays remain poor and dependent on handouts like the BR1M payments scheme to survive. Meanwhile, the market share and wealth of the richest Malays has grown enormously, fed by government contracts, shareholder quotas and outright corruption. It is not Malays as a whole that have benefitted from BN policy, but the Malay elite, and their Malay and non-Malay cronies in government, civil service and industry.

Challenging racism needs to be at the forefront of building a movement against UMNO. Bersih protests have been an important recent show of unity between different ethnicities in Malaysia against the government policies.

UMNO tries to use racism to divide the Bersih movement by attacking it as an anti-Malay coalition. The counter-Bersih “red shirts” led by Jamal Yunos, leader of the UMNO Youth, can only be challenged through a clear anti-racist position that argues for all minority ethnicities to be given the same rights to education, housing and social services as Malays.

Building up the strength that can challenge UMNO means building up a left that takes up working class issues and racism.

Bersih was correct to attack the GST as it disproportionately impacts the poor, and it should not be afraid to champion such issues beyond the narrow call for clean elections. This is a way to win over larger sections of the government’s support base in poor Malay communities and in the civil service, as well as bolster support among non-Malays.

For members of the diaspora in Australia, this means building a left embedded in working class struggles here, such as against Turnbull’s anti-union agenda in the proposed Australian Building and Construction Commission. There is also a critical need to fight racism here by opposing the offshore detention of refugees and racism towards migrant workers, including those on 457 visas.

The red shirts group in Malaysia has a very dangerous quality and there is a similar quality in Australia to the rise of Pauline Hanson and the far right One Nation party as a means to deflect anger over unemployment and low wages onto minorities.

To seriously challenge the vicious neo-liberalism and corruption at the heart of the Malaysian Government we need to build a left rooted in the working class; one that seeks to unite workers across all ethnicities and religions.