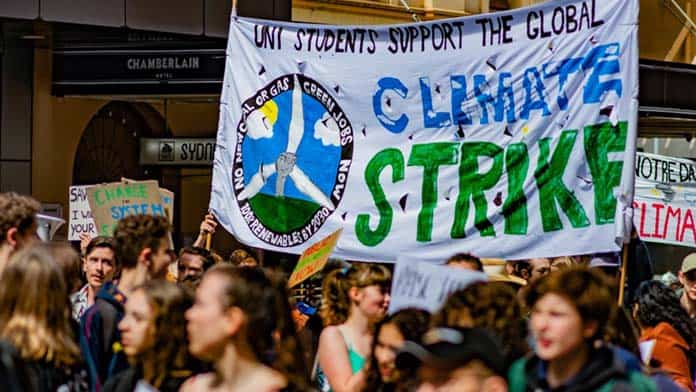 We are in the midst of an ecological crisis which is without precedent in human history. Warming locked will see the great barrier reef destroyed. Australia is already experiencing conditions expected of 1.5 degrees of warming – with frequent extreme weather events and deadly heatwaves, mass biodiversity loss and extinction. The earth is on track for at least 3 degrees of warming by the end of the century. This conservative estimate would see mass carnage – hundreds of millions displaced, hundreds of millions killed,  whole parts of the Earth – including on our own continent -becoming uninhabitable.

A tiny number of giant companies are responsible for this mess – 71 per cent of global emissions between 1988 and 2015 were caused by just 100 companies. These criminals have trillions of dollars worth of investment sunk in fossil fuels – they will not give these up unless we force them.

With the election of Joe Biden in the United States, many are hoping we are about to finally see genuine action. But despite committing to much higher emissions reductions than under Obama, his plan still relies on failed market mechanisms,  mythical carbon capture technology and is yet another ‘non binding pledge’ consistently undelivered by successive presidents.

In Australia, Morrison isn’t even pretending to be reducing emissions in line with keeping warming below 2 degrees, and his key economic policy following last year’s slump is support for a whole series of new gas projects.

It did not have to be this way. In 2019 millions of students struck around the globe for action on climate change. Climate change dominated newsfeeds and politics. The Federal election in Australia was dubbed ‘the climate election’.

Yet it returned the Liberal government to power – despite promising only minuscule reductions in emissions with no plan to achieve them.

This is because of the way the Liberals divided ordinary people on the issue of climate. A study produced by the Australian National University found that while 80 per cent of voters think more action is required to tackle climate change, voters were more concerned with issues of economic security. The Liberals won the election by relentlessly posing climate action as a threat to jobs – and the climate movement had no serious response.

This is why we must insist that the climate movement put demands for public renewables and climate jobs front and centre.

However, this is not simply to win the majority to vote left in the next election. It is to mobilise behind us the power to force genuine change – by winning over workers – who have the power to bring the fossil fuel addicted system to a halt. We saw a small glimpse of this when wharfies at Port Botany walked off the job to join the 2019 September 20 climate strike. To see this kind of action on a wide enough scale to force change, we will need to show workers across the country that climate action will also addressi the unemployment crisis, lower electricity prices, and come with a more secure future economically.

Once again Morrison is touting fossil fuels as a solution to the real issues around jobs, electricity prices, and economic uncertainty – in the form of the Liberals’ so-called ‘Gas-led recovery’. This is unlikely to deliver either the cheaper gas prices or the jobs that Morrison is claiming. But unless the climate movement fights for its own solutions to these issues we will once again play into Morrison’s hands.

More importantly, this would help build real power behind our movement. We are facing down the most powerful corporations in the world. We need more than protest: we need to bring the system to a halt. This can only happen if workers strike across the economy.

As students we can shut down our university with a mass strike, showing in practice that mass strikes are possible, and that we can achieve a mass strike with demands that put workers first. This could provide the inspiration needed to spark strikes by workers, and build real strength on our side.

This begins with mass organising in the here and now. We brought hundreds to the Student General Meeting by meeting students, doing announcements in every lecture we can, arguing, convincing, and persuading more students to become activists. We need this again on a much larger scale for the climate strike on Friday 21st of May.

And we need every climate activist at the May 1 action this Saturday. Showing we support workers who are willing to fight is key to building the trust and solidarity we need to build workers’ power in the climate movement.

Mass strikes capable of winning jobs and government spending on the scale needed to deliver serious climate action could also lay the basis for the movement going further. Workers need to take control of production ourselves as part of a revolution that overturns the existing system which subordinates our very existence on this planet to profits.

Solidarity is a revolutionary organisation that has been at the heart of building the climate strikes at usyd and putting class politics at their centre. We need this kind of organisation at every university, and in every workplace, to gather momentum everywhere, until we build the power to rid ourselves of this system for good.

Students and staff protested against plans for massive jobs cuts at the University of Sydney on Wednesday—only to again face a draconian and hypocritical police operation to disrupt and disperse them.