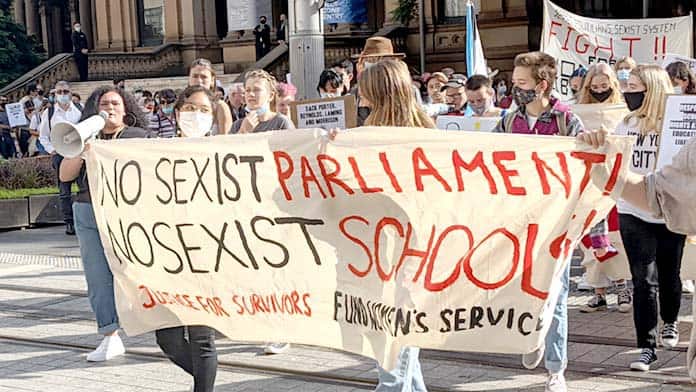 A crowd of 200 people, most of them high school students and young women, gathered at Sydney Town Hall yesterday to protest Scott Morrison’s ongoing failure to act on sexism. The rally was called by Youth Survivors 4 Justice, a group of mainly high school women and survivors formed to confront the sexism that faces us in our schools, workplaces, and daily lives.

Shanaya Donovan, a 17-year-old Darug, Dhungutti and Gumbaynggirr woman and one of the rally organisers, laid the blame for sexism squarely at the feet of the Liberal government, telling the crowd: “It starts in government and it trickles down to the rest of society like a giant domino that we can’t stop unless we band together.”

In the wake of the rape crisis in parliament, the Coalition government has put more Liberal women in cabinet positions but has failed to promise any meaningful change through the funding needed for essential services that support the most vulnerable women in Australia.

As Feiyi Zhang, a community sector worker and member of the Australian Services Union, put it: “Services are drastically underfunded and overwhelmed by the people they need to support. They don’t have the staff and resources to assist. DV West alone had to turn away 1280 women and children last year, half of the number who sought their help.

“The government has now cut JobSeeker despite poverty being a key determinant in whether women leave violent relationships. Many women will stay with abusive partners because there are no other options for them to financially survive.”

The rally demanded an increase in the JobSeeker rate to $80 a day, adequate funding for domestic violence and women’s health services, and legislating enthusiastic consent and expanding education around sex, consent and sexism in schools.

Speeches from survivors drew emotion and anger from the crowd, revealing the depth of pain at the heart of the issue. Survivor and activist Amanda Matthews spoke of her own childhood trauma, emphasising how sexual violence often takes place in the domestic sphere. She called on everyone to “teach young people, teach children that it’s ok to speak up” about sexual abuse.

Saxon Mullins, director of the Rape & Sexual Assault Research & Advocacy Initiative, spoke of the need for survivors’ voices to be heard. Mullins also connected the issue to Aboriginal deaths in custody, referring to Scott Morrison’s contempt for those facing violence at the hands of the police and prison system.

Other speeches drew links between government cutbacks and neo-liberalism and sexism. University worker Ruby Wawn spoke about casualisation as yet another factor in women’s economic precarity. Jenny Leong, NSW Greens MP for Newtown, called on governments to “not pretend that any of the traumas that people here have gone through are things that we cannot solve.

“We can solve all of these things. There are people in charge who have an interest in keeping that trauma happening.” Wider issues like homelessness, police violence and privatisation all exacerbated sexism, she argued.

On the same day in Brisbane, 150 protesters rallied near Liberal MP Andrew Laming’s office, calling on him to resign over his repeated harassment of women—and on Scott Morrison to kick him out of the Liberal Party now, not at the next election.

It is going to take more protests and grassroots action to push back sexism and tear up the system that promotes it.

The Youth March Against Sexual Violence on Kaurna land (Adelaide) on 24 June saw a spirited crowd of up to 1000 take to city streets.