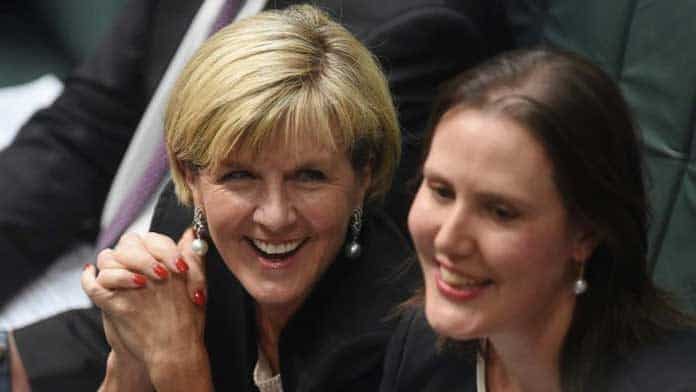 There is no doubt that women in politics and in parliament experience sexist bullying and harassment.

Sexist bullying inside the Liberal Party pushed Julia Banks to quit and move to sit as an independent MP. Only 25 per cent of Liberal MPs are women, and the party could be left with just five female MPs after the election.

Even Cabinet Minister Kelly O’Dwyer conceded that the Liberals are widely regarded as “anti-women”.

Greens Senator Sarah Hanson-Young has also endured years of sexist comments inside parliament, including David Leyonhjelm’s disgusting comment they she should “stop shagging men” during a Senate debate about violence against women.

But her suggestion in December that it was time to form a women’s caucus in Federal Parliament to combat the culture of sexual harassment and bullying completely missed the mark.

The women in Parliament who include Liberals, One Nation’s Pauline Hanson, right-wing anti-abortion Labor MPs like Jacinta Collins as well as more progressive Labor and Greens MPs, are no more “sisters” than female CEOs like billionaire Gina Rinehart and working class women are sisters.

In a 2014 address to the National Press Club, Julie Bishop declared herself to be no feminist, and said that she was “first and foremost a parliamentarian and minister” creating a clear distinction between her position of power and her identity as a woman.

Bishop also echoed the capitalist merit argument stating that she would “never blame the fact that I’m a woman” if she could not advance in her career.

She joins the ranks of Liberal women such as Concetta Fierravanti-Wells, Linda Reynolds and Fiona Scott who see no benefit to the collective struggle of women because of the capitalist logic says that if you work hard enough, you’ll achieve your goals.

Fierravanti-Wells says she won her, “preselection for Parliament fair and square after five attempts”.

Women like this have no interest in addressing the issues that affect the majority of working class women, such as the rising cost of living, stagnant wages, and the challenge of balancing the need to survive with the responsibility of being an unpaid carer.

Liberal women in parliament live in a completely different world and do not represent the majority of working class women.

Instead, they represent themselves, their careers and, usually, the interests of the ruling class.

The liberal feminist aim of increasing the representation of women in positions of power, such as on corporate boards or in parliament, does nothing for the material lives of working class women.

Ruling class women and women MPs experience sexism. But they are more likely to be able to afford enough childcare, or a nanny, to reduce the burden of domestic labour.

Women who sit in positions as bosses of thousands of workers or as government ministers also benefit from the sexism that leads to lower wages for women workers and cuts to public services that make working women’s lives harder.

The parliament is not a workplace. It is an institution integral to protecting the interests of capitalism and the ruling class.

It routinely reflects the values of capitalism by enshrining endemic sexism in legislation.

In NSW, we have seen the closure of countless women’s shelters and refuges as part of the Liberals’ quest for privatisation.

Women are spending up to 80 per cent of their pay check on childcare and can barely afford to continue working while childcare workers themselves, over 90 per cent of them female, are earning well below the national average. And the Gillard government, the government of our first female Prime Minister, cut access to the Single Parenting Payment forcing more single mothers to live on the dole.

The Forced Adoption laws pushed through NSW Parliament late last year is yet another example of the sexism of the state.

Under these laws, children who have spent only two years in out of home care can be adopted without the consent of their families.

These laws will punish women but Aboriginal mothers in particular whose “motherhood” does not meet the expectations of government bureaucrats.

The success of capitalism is predicated on the ability of the state to minimise spending on public services that have the potential to liberate working class women.

And as the managers of capitalism, most women in parliament are no sisters of the working class.