Suffragettes: The vote, the war and working class women 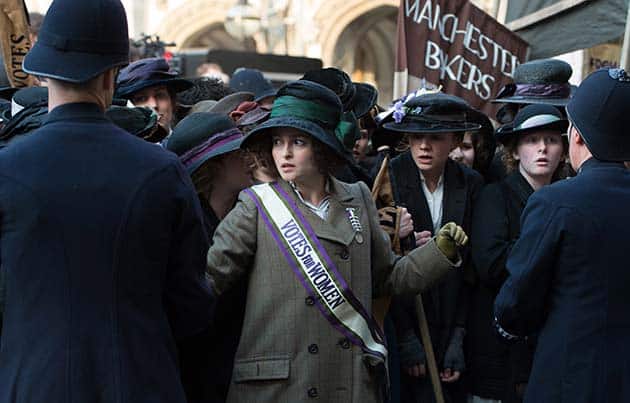 Geraldine Fela discusses the new film Suffragette, and how the fight for the vote polarised between wealthy and working class women

Suffragette is a timely reminder that rights such as the vote were not handed to us by sympathetic parliamentarians. They were fought for, in this case by a movement that had the British establishment terrified.

Suffragette pulls no punches in showing us police brutality, and the horror of the force-feeding that hunger striking suffragettes endured as political prisoners. Nor does it hold back in showing us the women’s militancy, from destroying post boxes and smashing windows to blowing up politicians’ country homes. Where the film falls down is in its commitment to portraying a “sisterhood” combining different classes. In reality, wealthy women and poor women didn’t have a common cause. Upper class women ultimately betrayed the movement; it was up to working women to win the vote.

Suffragette tells the story of Maud Watts (Carey Mulligan), a laundress, as she is drawn into the struggle for women’s suffrage. We see the atrocious conditions that working class women experienced in 1912 London. Placing a working class woman at the centre of the narrative is welcome, but nevertheless, it depicts a top-down version of the struggle for suffrage. Maud and women like her are mere footsoldiers, doing the bidding of charismatic middle class personalities such as the famous Pankhurst family.

Working women on the move

In reality, long before the Pankhursts, working class women had been organising and mobilising alongside men for higher wages and better working conditions. The late 19th century saw an enormous upsurge of workers’ struggle and an explosion of trade union membership.

In the decade from 1886 the number of women in trade unions rose from around 37,000 to nearly 118,000 in 1906. Radicalised and growing in confidence from battling the bosses, it was these women who first committed to the fight for the vote. They campaigned and organised in their workplaces, leafleting, petitioning and speaking out.

Mass meetings were held after working hours in working class neighbourhoods. In one such open meeting in 1906 leading suffragist Selina Cooper told the crowd that women, “do not want their political power to enable them to boast that they are on equal terms with men. They want to use it for the same purposes as men—to get better conditions.”

Selina Cooper had worked in cotton mills since the age of ten. She and women like her understood that suffrage was only a tool in a wider struggle, that the vote was important but that it wouldn’t fill a hungry stomach—it needed to be fought for alongside better pay and conditions for all workers.

In contrast, for middle class suffragettes such as Christobel and Emmeline Pankhurst, winning the vote was about gaining access to the privileges and power of the men of their class. They grew hostile to a working class perspective, and to supporting causes like Irish independence. At one stage, Emmeline declared that, “our members are absolutely single minded; they concentrate all their forces on one object, political equality with men. No member of the WSPU divides her attention between suffrage and other social reforms.”

Debate raged inside the movement over whether it should campaign for the vote on the same existing terms for men, or for universal suffrage for all adult men and women. Prior to 1918, only 58 per cent of men had the vote in Britain. The requirement that men either own property or pay an annual rent of ten pounds excluded many poorer workers. Suffragette ignores this important fact.

In one scene, Maud’s husband Sonny angrily asks her, “What would you do with it [the vote] Maud?” to which she replies, “Do the same you do with yours, Sonny. Exercise my rights!” Yet it’s highly likely that a poor worker like Sonny would, like his wife, have been denied the vote under the existing law. He would have had as much to gain from universal suffrage as Maud.

Unfortunately, despite the enthusiasm for the vote amongst working women, the leadership of the labour movement was largely inactive on the question. Some trade union officials held reactionary ideas about a woman’s place being in the home. Some argued that supporting women’s suffrage on the existing terms would only increase the vote for the powerful and propertied, arguing it would mean “votes for the ladies”. The socialist solution was to make women’s suffrage a central demand of the struggle for universal suffrage.

But even some socialists were confused. In 1907 at the International Socialist Congress in Stuttgart, the Austrian socialists argued that for the sake of winning wider suffrage for men, it was tactically correct to not put the demand for women’s suffrage in the foreground and to demand instead “universal manhood suffrage”. The majority of delegates, however, voted against the Austrian proposal. But in some countries, including France and Britain, the broader labour movement did not take up the fight for women’s suffrage, leaving the leadership of the struggle in the hands of upper class women.

The Pankhurst family originally had roots in the labour movement, and had been part of the Independent Labour Party. But their middle class background meant that their focus quickly moved away from the working class and towards “respectable” women.

The organisation they formed, the Women’s Social and Political Union (WSPU) came to reflect this. Alice Milne, a working class supporter, visiting the WSPU offices in 1906, found the place to be, “full of fashionable ladies in silks and satins”.

This is not to say that the WSPU was not militant, it was. Between 1910 and 1912 the WSPU campaigned around three separate bills before parliament to extend the vote to women; each was defeated. Disillusioned and furious, Emmeline Pankhurst called for direct action.

Just as seen in the film, guerrilla style groups of women routinely attacked the homes of MPs who voted against women’s suffrage. Vandalism was common and no one who stood in the way of the vote was safe.

Whilst this took immense bravery and sacrifice, these tactics failed to engage with the masses of ordinary women. After all, middle class women could afford a spell in prison but for women living on the breadline this could mean losing your job and your home.

Though they were right to see the futility of change through parliament, the middle class Pankhursts failed to see the power that masses of organised working class women could wield if they were drawn into the struggle. There was, however, one exception—Sylvia Pankhurst, the daughter of Emmeline and sister of Christabel and Adela, became a revolutionary socialist.

While Christabel was contemptuous of the working class, telling Sylvia that, “Working women are the weakest portion of the sex … We want picked women, the strongest and most intelligent”, Sylvia recognised their power to transform society. In 1913, she set up the East London Federation of Suffragettes (ELFS).

The aims of the group were very different to the WSPU. They organised and mobilised working class women in the fight for the vote, and also campaigned over pay, poverty and childcare.

In 1913 Sylvia spoke at a mass rally supporting striking Irish workers, bringing together the three political issues most sensitive to the British state: women’s suffrage, Irish independence and the labour movement. Shortly afterwards she was imprisoned and then released.

Weak from successive hunger strikes, Sylvia escaped to France to meet Christabel who was staying in a palace of a Princess and directing the campaign “at a distance”. Sylvia arrived, in her words, to “find Christabel nursing a small Pomeranian dog”.

Christabel promptly told her that her East London branch was expelled. Christabel was unhappy with the democratic nature of the organisation and its orientation towards working women. She stated that, “we want all women to take their instructions and walk in step like an army”.

The response of the ELFS was to add the colour red to its banner and continue to grow. In 1916 it changed its name to the Workers’ Suffrage Federation.

The split within the Pankhurst family was far more than just a family feud. It represents how the movement split along class lines. Sylvia saw that simply winning equality with men in existing society would ultimately only benefit already wealthy women.

The outbreak of war in 1914 threw the differences into sharp relief. Emmeline and the WSPU completely dropped the demand for women’s suffrage and threw themselves into a nationalist campaign to support the war. They renamed their paper Brittania and instead of mobilising women to fight for the vote, they mobilised them to hand out white feathers to men who were not fighting to shame them as cowards.

Sylvia, in contrast, was a staunch anti-war campaigner. She understood that no one but the ruling class, hell bent on imperial expansion, would gain from the carnage and bloodshed of WWI. Sylvia and the ELFS continued to campaign for universal suffrage and against the war.

In 1917 in Russia, a working class revolution toppled the Tsarist regime and established a workers’ government in a major country for the first time. Mass revolt and mutiny spread through the battlefields of Europe, as soldiers on both sides walked out of trenches and refused to fight.

Sylvia renamed the East London Suffragettes’ paper The Workers’ Dreadnought (from The Women’s Dreadnought) and spread news about the revolution and workers’ councils.

At the end of WWI the spectre of revolution haunted Europe’s rulers. In the face of this, the British State made concessions. In 1918 suffrage was extended to include women over 30 and all men over 21, and finally, in 1928, the law was amended again to give all women over 21 the vote.

The role of the war and the radical working women like the Sylvia Pankhurst and the East London Suffragettes is sadly missing from the film Suffragette. When leaders like Emmeline and Christabel Pankhurst fell into step with war-mongering governments, it was the working women of the ELFS who kept up the fight. In the story of how we won the vote, working class women like Maud are the real heroes.

Gillard’s misogyny speech tainted by her hypocrisy on sexism

Sunday 9 October is the tenth anniversary of Julia Gillard’s Misogyny Speech, when she destroyed Liberal leader Tony Abbott in parliament.

The 1970s and the fight for abortion rights in Australia

Worldwide outrage as abortion rights overturned in US