The resurgence of feminist organising has led to renewed debate about who benefits from sexism, and who has an interest in fighting it, writes Amy Thomas

After decades of backlash against the gains of the women’s liberation movement of the 1960s and 70s, there has recently been a resurgence of activism across the world to challenge sexism.

This exciting “new feminism” has sparked discussion and debate, particularly over the role of working class men in the fight against sexism.

Historically, international socialists like Solidarity have challenged “patriarchy theory”—the idea that society is fundamentally divided along gender lines and that all men form part of the power structure that keeps women oppressed.

We argue that sexism is rooted in the structures of capitalism. While many men hold sexist ideas, working class men do not in fact benefit from sexism—it is a weapon used by the capitalist class to get free domestic labour and to keep the working class divided and under control.

But in a speech and article, “Marxism, Feminism and Women’s Liberation”, Sharon Smith of the US International Socialist Organisation (ISO) has argued that international socialists need to abandon the argument that men do not benefit from sexism. Smith says that such an argument underplays the seriousness of women’s oppression. 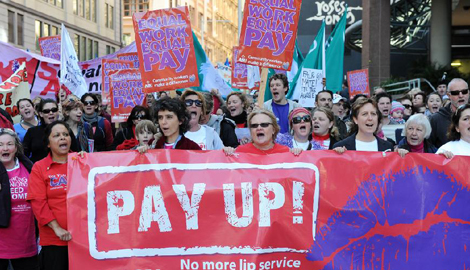 Unfortunately, Smith evades the question of whether men do benefit—a dangerous fudge to make when fundamental arguments are raging about how to struggle for women’s liberation.

More confident to clearly break with the international socialists position is Richard Seymour, who recently split from the Socialist Workers Party in Britain. Seymour has embraced the concept of “male privilege”, which has gained currency recently as a way to argue that all men have a stake in the maintenance of sexism.

The argument that men “benefit” from sexism or possess male privilege has a resonance because it speaks to people’s experience. Many women have experiences of men being the perpetrators of sexist objectification or abuse. But sexism is much more than this—and it’s obvious that women, too, are also subject to sexist conditioning.

But we must go deeper to grasp the root of women’s oppression. As Karl Marx famously said, “the ruling ideas in society are the ideas of the ruling class.”

Sexism is the institutionalised discrimination against women and is reproduced by all the institutions of capitalist society—parliament, police, the courts, religion, the media.

They create all the sexist poison that permeates every aspect of society from the “it’s a boy” or “it’s a girl” moment. Think of Julia Gillard’s opposition to same-sex marriage, the discrimination against women in the judicial system, or the rampant sexism in the military, police force and sport. Advertisers exploit sex to sell everything; phoney science declares women’s “inferiority” is biologically determined, while women’s magazines photoshop images and suggest worth is based on lack of cellulite and men’s magazines objectify women on the basis of breast size.

This is the transmission belt for the sexism that women experience and that indoctrinates both men and women into sexist ideas.

The white picket fence, and heterosexual nuclear family ideal means childcare and domestic labour is performed at no cost to the bosses or the state.

Sexist ideas can make it more difficult to mobilise men, but male workers do not benefit from women’s oppression. In fact they have an interest in fighting against it. If men are seen by the women’s movement as the enemy, the movement will be less able to confront the system responsible for the violence and misery of sexism.

This is not a position shared my many feminist thinkers. Patriarchy theorists such as Heidi Hartmann have argued that men benefit from women’s oppression because of women’s domestic labour in the home.

Women still do the majority of domestic labour in the home. Research from the Australian Institute of Family Studies earlier this year found women spend almost twice as much time on housework and childcare as men.

The 2006 Australian Bureau of Statistics (ABS) housework survey, which describes housework as “providing goods and services that would otherwise have to be paid for”, estimates that unpaid domestic labour is worth up to half of GDP.

But housework is primarily about raising children—the system’s next generation of workers. Even the care of men that results from women’s domestic labour is about servicing capitalism’s need for healthy workers.

The ABS housework survey also shows that adults, both men and women, spend an average of 50 hours a week, either at work or doing housework. Both men and women are devoting their lives to serving the needs of the system. Former Labor Prime Minister Kevin Rudd called the family “the incubator of social and economic capital.”

Women are pushed into taking primary responsibility for domestic labour by unequal wages, lack of childcare and society’s sexist expectations, not by individual men.

As Lindsey German has argued, “The family under capitalism is dominated by the needs of social production. Its role is straightforward: to maintain the existing generation and, more crucially, to reproduce the next generation of workers. The reproduction of labour power is the central role of the family, and women’s role in society is subordinated to that.”

This is why socialists have always argued that to free women from the burden imposed by the family, domestic labour must be socialised, there must be free childcare, public laundries and communal kitchens.

Male workers also have an interest in fighting for these things. Working class women need to fight together with men to abolish the double burden and win equality for all.

The same goes for fighting for equal pay for women. Because men earn more that women, some draw the conclusion that this must come at women’s expense.

Research by the National Centre for Social and Economic Modelling at Canberra University shows that since 1990, the gender wage gap has actually increased over the past decade, from 15.1 per cent in February 2005 to 17.5 currently. They estimate that over a lifetime, this could result in an average earnings deficit of $1 million to $1.5 million.

But working class men don’t get pay rises because the pay of women workers is held down—in fact the opposite is the case. And couples lose out from the gender pay gap. It diminishes the whole family’s overall income and weakens the overall battle for better wages for both men and women. The people laughing all the way to the bank are not male workers, but the CEOs and managers.

In practice, the union struggle for equal pay in Australia has been won by working class women and men fighting together.

“The woman and her male comrade are enslaved by the same social conditions; the same hated chains of capitalism oppress their will and deprive them of the joys and charms of life. It is true that several specific aspects of the contemporary system lie with double weight upon women, as it is also true that the conditions of hired labour sometimes turn working women into competitors and rivals to men. But in these unfavourable situations, the working class knows who is guilty.”

But this is a manifestation of sexism, not its root cause. Only a minority of men inflict violence against women; most men abhor it. Men are also responsible for the majority of violence against other men. Suicide is the leading cause of death for young men in Australia. This is not a description of a ruling group in a position of power and control.

Like women, men are demeaned, dehumanised and insulted at work, and have no say in how the world works.

Men too are constricted by the image of the macho male they’re supposed to fit into. It is the powerlessness and alienation generated by the system that can lead a minority of men to act out in horrific ways. There is no “benefit” in this tragedy.

In a world full of sexism, men will adopt sexist ideas and there must be a battle against sexist behaviour and ideas wherever they manifest. Leon Trotsky was right when he said that, “In order to change the conditions of life we must learn to see them through the eyes of women.”

Understanding that “men don’t benefit” does not diminish the recognition or the seriousness of confronting women’s oppression.

In the strongest years of the women’s liberation movement in the 1970s, women and men united together in strikes over equal pay; Builders Labourers went on strike for women’s studies; male workers walked off for abortion rights. Women and men fought together against the war in Vietnam and for Aboriginal rights.

Understanding that men can be won to the fight for women’s liberation is crucial to both fighting for immediate reforms and ultimately to fight, once and for all, to end the system that produces the horrors of sexism.