The horrific gang rape of a woman by six men on a public bus in Delhi, India, sparked angry protests across the country in December.

In New Delhi, thousands defied an official ban on protests to come out onto the streets, where they were met with water cannons, batons, and tear gas. Much of the anger has been directed at corrupt politicians and the legal system. Figures released by a respected Indian think tank show hundreds of men accused of sexual violence and rape have been candidates for the major parties in the past five years. Many bribe their way out of court in a country where politics is riven with nepotism and inherited wealth.

Rape and sexual assault is common in India. A woman is raped in New Delhi every 14 minutes, according to official figures. Yet while the statistics indicate a sharp rise in the number of rapes committed, the conviction rate has dropped from 41 per cent in 1971 to 27 per cent in 2010.

The approach of state institutions is to blame the victim. It took police 45 minutes to respond to the rape in New Delhi. Many commentators held her to blame because she was out late at night with her partner. One of the lawyers representing the accused claimed he had never heard of a “respected lady” being raped in India. Politicians from across the political spectrum have made similar comments. 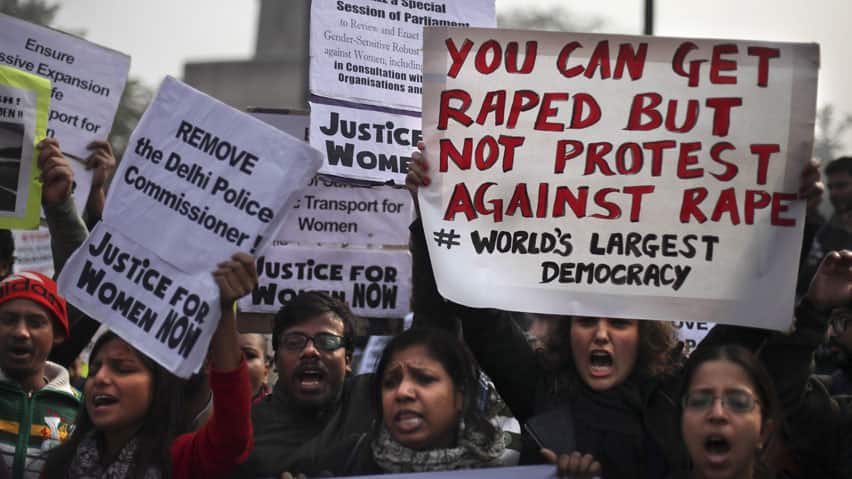 The protests have stridently rejected this attitude, opposing restrictions on women through curfews or dress codes. Women at the demonstrations held placards with slogans like, “Don’t tell me how to dress, tell them not to rape” and “Don’t teach me how not to get raped, teach him not to rape”.

Some protesters have been demanding the death penalty or castration for the rapists. But this is not going to improve the situation for women. Indian activists have spoken out during the protests about how the police and army are guilty of rape themselves and cannot be entrusted with providing real justice for women.

Jaskiran Chohan wrote in Socialist Worker that the, “army and police use rape to try and destroy movements that threaten the Indian state, such as those of the Naxalite peasants and nationalists in Kashmir.” The rape of two young women in Shopian, Kashmir, in 2009, was covered up by the Indian state.

The sexism in society that makes rape and sexual assault so widespread is a product of state discrimination. Indian law does not recognise rape in marriage. There is no equality of opportunity for women—in fact, on average they make 62 per cent of what men make for the same work.  Conservative attitudes about women’s role in the family reinforce this inequality.

The focus on the death penalty has not gone unchallenged. Nearly 50 women’s collectives and human rights groups and over 100 social and political activists from across the country released a statement opposing the death penalty, saying it is “neither a deterrent nor an effective or ethical response to these acts of sexual violence.” Protests have been called to demand the removal of the Delhi police commissioner, and to demand safe, affordable and accessible public transport.

Western media coverage has often labelled India as “the worst place in the world for women”. Yet the problem is just as real in Australia. The most reliable survey on rape and sexual assault, by the Australian Bureau of Statistics, reveals that one in five women will experience sexual violence in their lifetime.

What is striking about the Indian protests is some similarities they have with the Slut Walk rallies that swept the world in 2010. The first Slut Walk protest in Toronto, Canada, was a response to exactly the same kind of attitude from police there was in the Delhi case. Many of the slogans have crossed borders. And according to Kavita Krishnan, Secretary of the All India Progressive Women’s Association, the legal bias against women in rape cases, including exams of rape victims to establish if they have had regular sex, is a Western invention: one of the legacies of British colonialism.