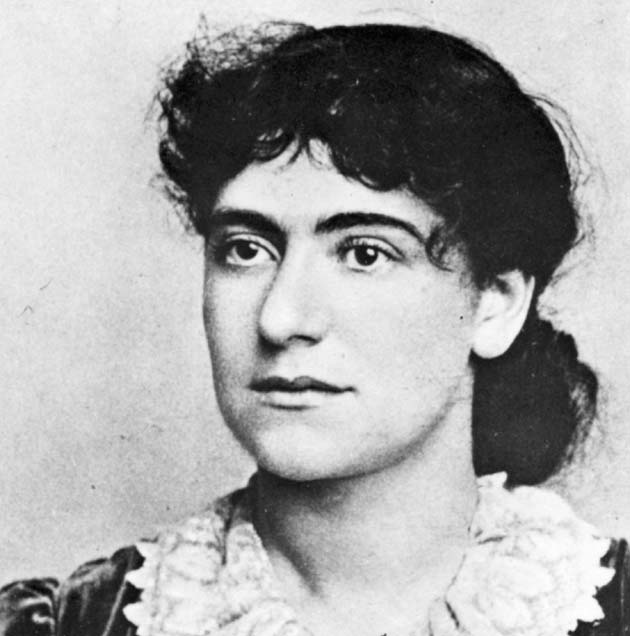 Eleanor Marx was one of the greatest political activists of her time. She lived through, theorised and responded to the monumental waves of class struggle of the 19th century.

Holmes paints a vivid picture of Eleanor Marx, Karl Marx’s youngest daughter, growing up in a London political hothouse. Karl Marx home schooled “Tussy” (Eleanor’s nickname) while he was writing Capital. As a child she developed her own fierce opinions on insurrectionary Poland, Civil war in America and Italian Republicanism. Friedrich Engels and his partner Lizzy Burns initiated her to working class life and the Irish Independence struggle with an extended excursion to Manchester at the age of 14.

She was as thoroughly internationalist as her father, who at the time was setting up the International Working Mens’ Association, known as the First International.

A theoretical commitment to the self-emancipation of the working class became a live possibility for Eleanor and socialists around the world with the Paris Commune. When Eleanor was 16, the workers of Paris revolted and ran first workers’ democratic self- government the world had seen.

Eleanor drew immediate lessons about the role of women in class struggle. Women were leaders and fighters in the Commune alongside men, and their activity did more to transform their lives in 72 days than any reformist government had ever done. The working class promptly granted themselves equal pay and divorce rights, and promoted girls’ education.

After two months the French government crushed the Commune, killing 20,000 communards and their supporters (Eleanor was briefly imprisoned in France as well). The defeat was devastating. But for Eleanor Marx and her political milieu, there were urgent lessons for communists: the real possibility of a world of workers’ control, and the need for struggle and solidarity for such germs of socialist societies to survive.

Among Eleanor Marx’s most significant political contributions was the pamphlet she and her partner Edward Aveling wrote in 1886 called The Woman Question from a Socialist Point of View. Women were yet to win the vote anywhere in Europe, but the role of women in society was debated everywhere. Eleanor Marx used this pamphlet to argue that socialists must take women’s oppression seriously, and consider the issue the perspective of working women.

It argues that women’s oppression is bound up in the history of class society, not a universally immovable fact, an idea Engels introduced in, The Origin of the Family, Private Property, and the State.

Marx and Aveling insisted that there was no disentangling sexism from the system that creates it, arguing: “those who attack the present treatment of women without seeking for the cause of this in the economics of our latter-day society are like doctors who treat a local affection without inquiring into the general bodily health.”

The authors are particularly scathing of those concerned only with the injustices faced by ruling class women, and who “make no suggestion that is outside the limits of the society of today. Hence their work is, always from our point of view, of little value.”

The Woman Question discusses the isolation and oppression women face in their social role under capitalism as wives and mothers, in “serfdom recognised by law”: “The old promise of the legend, in sorrow shalt thou bring forth children, is not only realised, but extended. She has to bring them up through long years, unrelieved by rest, unbrightened by hope, in the same atmosphere of perennial labour and sorrow … The woman is occupied until bedtime comes. Often with young children her toil goes far into, or all through, the night.”

Perhaps these lines are what convinced biographer Holmes that Marx was a lifetime “feminist”, fighting for equality with men as a project tied up with, but in some way separate from, the struggle for socialism. She suggests that Eleanor Marx was promoting the idea of a female “united feminist front, challenging across class divisions the divide and rule that regulates production and reproduction”.

But Brown points out in A Rebel’s Guide that as Marx that when she gained more trade union experience and saw in action the power of solidarity between working men and women, she became far clearer about the best strategy for achieving women’s liberation, and it did not include cross class feminist fronts. In an article for an Austrian women’s paper in 1892, Marx wrote: “Now it seems to me we must commence by organising as trade unionists using our united strength as a means for reaching the ultimate goal, the emancipation of our class … it will look less and less difficult in proportion as the women and especially the men learn to see what strength lies in the unification of all workers”.

Eleanor Marx clarified her theory through collaboration with other Marxists, like Clara Zetkin. She saw that working women had different class interests to bourgeois women, and that their allies were working men.

In the 1892 article, Marx quotes Zetkin’s speech to the German Social Democratic Party’s Gotha conference, saying, “And that is why the working woman cannot be like the bourgeois woman who has to fight against the man of her own class … [for] the proletarian women on the contrary, it is a struggle with the man of her own class against the capitalist class … Her end and aim are not the right of free competition with men, but to obtain the political power of the proletariat.”

What Marx and Zetkin were discovering is that ruling class women, like the Julia Gillards of today, hold back the struggle for the emancipation of women through their role running a capitalist system that depends on women’s oppression.

1888 was the year that mass union struggle exploded across Britain. It was here that Marx married women’s liberation with working class struggle in practice. Far from urging an alliance with ruling class women, she was right at the epicentre of the working class explosion, driving a strident socialist agenda, arguing that the struggle must be built on solidarity with women, and marginalised workers. Tens of thousands of the most precariously employed and downtrodden workers formed or joined unions, held strikes and demonstrations and successfully wrestled better pay and conditions from their bosses.

The Bryant and May match women’s victorious three week strike inspired women, Irish and other marginalised workers to see their own potential power. The gas workers were next, demanding an 8 hour day, and they won their demand without even having to strike!

The National Union of Gas workers and General Labourers was born in 1889 at a meeting called by socialist militants, including Eleanor Marx. She built the union at Silver’s rubber, telegraph and electrical factory, putting particular effort into recruiting women, who were 15 per cent of the workforce.

Mark Hutchins and Will Thorne, presidents of the new union, spoke of Marx’s role in bringing women into the union, “Mrs Aveling [Eleanor Marx] started a Women’s Union at Silvertown, and asked if they would be admitted … 3000 men were present and her question was answered unanimously and enthusiastically in the affirmative. Since this, female branches—and very flourishing ones—have been organised in London and Bristol … men and women are on equal footing.”

Workers had learned that solidarity was crucial, and that divisions between crafts, skill levels and sexes would be used by bosses to weaken their struggle. The Great Dock Strike in 1889 saw united struggle spread further. Port workers struck in mid-August, inspired by the match women and gas workers. By the end of August the strike had spread to other trades including ship painters, carpenters and workers in largely female trades like jam, biscuit and match manufacturing factories.

Eleanor Marx organised strike support, spoke in workplaces and at demonstrations, and always urged self-organisation, solidarity, and socialism. “We aim at a time when there will no longer be one class supporting two others, but the unemployed at the top and at the bottom of society be got rid of”, she declared at one of her most famous and rousing May Day speeches.

The 1890s saw a major bosses offensive. Workers were blacklisted and starved back to work, and the police were brutal and organised. Solidarity and militancy waned, and the new unions that Eleanor had thrown her life into were losing members.

In this climate of defeat, one of Eleanor’s closest comrades, Friedrich Engels died. She also suffered huge personal betrayal when she discovered Edward Aveling had secretly married another woman. Tragically, Eleanor Marx committed suicide by prussic acid in 1898.

Eleanor Marx’s loss was felt deeply around the world, but the lessons she drew out of the New Unionism movement and her arguments about the need for socialists to take up “the woman question” live on. Both biographies of Eleanor Marx revive an inspirational life and times.