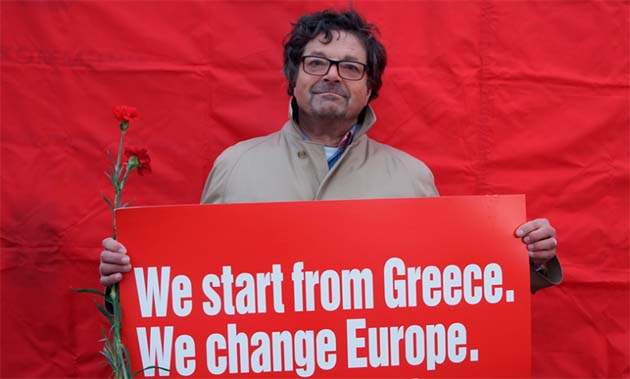 From January’s election, through all the twists and turns of the last six months, Kevin Ovenden has been a key source of English-language updates on the Syriza government and the monumental events taking place in Greece.

Now he has produced one of the first detailed accounts of the events that made the radical left’s rise to government possible, and Syriza’s rapid capitulation to EU-imposed austerity.

Syriza’s commitment to negotiating within the European Union saw it accept brutal new austerity measures in July, worse than those it agreed to tear up after its election in January.

The failure of Syriza, held up as one of the best hopes for the radical left in decades, contains crucial lessons for all those committed to radical change.

Ovenden puts at the centre of his account not just the catastrophic economic collapse in Greece since 2009, and the austerity policies that worsened it, but a level of “social resistance, unmatched anywhere else in Europe”.

The Greek working class staged 30 general strikes, along with hundreds of other localised strikes and struggles, in an effort to stop cuts to wages of one third and swinging cuts to public sector jobs, pensions and services.

The movement was not able to stop parliament passing the austerity packages. But it “blunted and slowed the pace of attack. And it had brought down one government after another”.

Millions of Greeks had been part of five years of struggle, and the experience changed them and opened them up to new arguments from the left. This experience was the key to making the election of Syriza possible.

It also strengthened networks of trade union, social movement and left activists, who were aware that the election of Syriza would not be the end of the struggle, he writes, but that further battles were to come.

But the experience of mass struggles contained within them two potential political responses, he writes. One was to look to the election of Syriza as a way to give the radical left a chance at power for the first time.

“A second, minority, answer was provided fleetingly at the highpoints of the struggles themselves—developing new forms of democracy, challenging the old power centres for control, from the local environment to the national broadcaster.”

The mass support for electing Syriza represents a stage in workers’ consciousness where, “For most people the two answers were not in opposition.” But ultimately they do represent different strategies for social change.

The strategy Syriza adopted, of taking power through the existing state and parliamentary institutions, has failed to end austerity.

Ovenden also foregrounds the international debate about Syriza as a model for the left taking power, laying bare the strategy it employed to do so.

He outlines how Syriza made increasing compromises and began moderating its policies as it prepared for power between 2012 and 2015.

One of his most illuminating chapters is on Syriza’s compromise with the Greek “deep state”. Any modern state has a bureaucracy committed to the interests of the rich and powerful which survives democratic changes of government, and can frustrate left-wing policies. But in Greece, Ovenden explains, the legacy of the civil war following the Second World War and military rule from 1967-74 has created a bloated military and police apparatus. This has produced continuing networks inside the state bureaucracy with an especially right-wing, nationalist outlook.

On taking government, Syriza’s strategy was to conciliate the “deep state” through giving the posts of Foreign Affairs, Police and Defence Ministers to right-wing figures outside the party. The effect of these measures was to reassure and encourage hard right elements in the military and police forces. Tsipras even signed a deal in April to spend $750 million modernising military planes, making a down payment of $65 million at the same time as reducing the humanitarian measures Syriza had promised to introduce to deal with poverty.

Another useful chapter explains the growth of the anti-racist and anti-fascist movement, from the opposition to Islamophobia instilled by the anti-war movement of the early 2000s to the response to a series of racist panics engineered by successive governments. He highlights the courageous resistance of Pakistani and other immigrant groups in standing up to resist this racism. This dates particularly to 2012, when 15,000 mostly new migrants demonstrated following the round up and detention of thousands of undocumented migrants in a vicious police operation.

Even those who have followed the Syriza drama closely will find useful background in his book, from Syriza’s pre-history in the path of Synaspismos, to the scale of the 2008 youth revolt to the history of the Greek state.

Ovenden’s sympathies are clearly on the side of the anti-capitalist left, and he outlines how anti-capitalist measures like cancelling the debt, exiting the Euro and seizing the wealth of Greece’s capitalists could chart an alternative route out of the crisis.

The realisation of this vision will rely on the “glimpse of a new way entirely of doing things”, where workers take control of their workplaces into their own hands, seen fleetingly during the struggles against austerity, becoming generalised.

Syriza: Inside the labyrinth
By Kevin Ovenden, Pluto Press

Opposition to austerity in Greece forces Syriza back to the polls