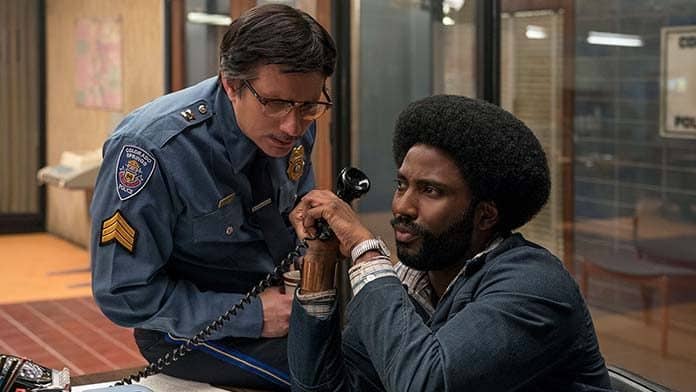 BlacKkKlansman, the new Spike Lee film, couldn’t come at a better time. It is a powerful anti-racist roar to action against the rise of the far right.

The film is hilarious from start to finish.

But it also cuts to the heart of racism in the early 1970s while drawing parallels with Donald Trump’s administration.

The basis of the film is the true story of Ron Stallworth, Colorado Spring’s first black police officer.

He goes undercover alongside Flip Zimmerman, a Jewish officer, to foil the plans of the local Ku Klux Klan (KKK).

The film starts with a KKK promo video before moving to Ron’s first assignment, where he goes undercover at a Black Power rally. He’s there to monitor Kwame Ture, also known as Stokely Carmichael.

This dramatic start sets the tone for the rest of the film. We’re shown the malice of the far right juxtaposed with the revolutionary rhetoric and solidarity of Black Power. Unfortunately, the revolutionary voice is regularly shown to be just rhetoric.

The film overall is very welcome, but there are many problems. Patrice Dumas is a black student union president and love interest to Ron.

She regularly challenges the role of the police, and especially Ron’s role as a black man in the department. However, her arguments are often undermined and made to seem naïve or reflecting a lack of understanding beyond her own politics.

The police in the film are criticised at times, but overall they come off quite well. Only one police officer is shown to be racist while Ron is supported by the rest of the department and the FBI.

It is a shame that Lee would try to gloss over institutional racism and make it seem like there are simply a few bad apples.

Boots Riley, musician and director of Sorry To Bother You, has rightly criticised Lee over this.

KKK supporters are vilified brilliantly and their fascist beliefs are exposed, as they should be. But Lee falls into the pitfall of making it seem like they are all stupid, even grand wizard David Duke.

While this adds to the comedy, it also adds to an idea that we don’t need to take them seriously. Underestimating the fascists is very dangerous.

Ron’s position in the film is consistently that of the intelligent moderate.

He stays calm and is able to control every situation while arguing to work within the system to make change.

Left wingers and right wingers are on either side of him. But this feeds a false idea that the left is as bad as the right.

Whatever misgivings there were during the film, the ending redeemed it. It has an incredibly powerful tribute to murdered anti-fascist Heather Heyer.

And footage from fascist and anti-fascist demonstrations compares the rise of the far right today with the KKK back then. It shows Trump defending Nazis and is sympathetic to anti-racists.In the packed cinema you could hear a pin drop and I left with an overwhelming feeling of anger and a need to do something.

BlacKkKlansman really is a call to arms for everyone to make a stand against the rise of the far right. People will leave angry and wanting to take action.