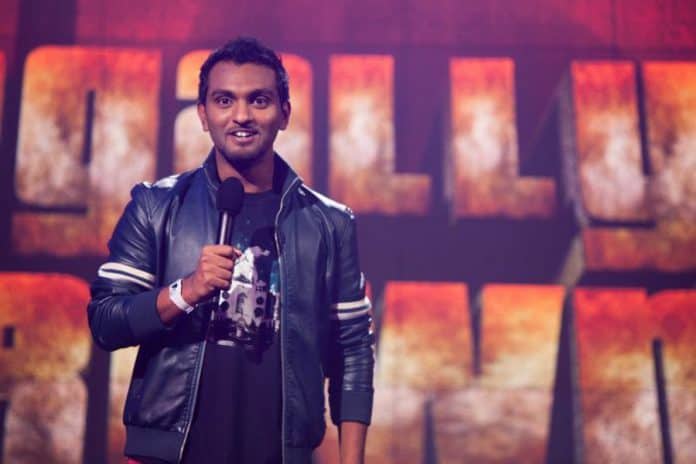 Nazeem Hussain made his mark as part of the Fear of a Brown Planet duo with Aamer Rahman, exposing the absurdity of John Howard and Liberals’ “war on terror” after 9/11 and the racism that went hand in glove with it. After enjoying success with the show, Hussain’s new project Legally Brown on SBS will have viewers expecting the same cutting political messages as his previous comic venture. But the show is disappointing.

On debut, Hussein issues a warning to those “expecting funny accents, jokes about the weird foods we eat and stories about my wacky ethnic parents” and assures us this will be avoided in Legally Brown. Hussain is acutely aware of the way that ethnic minorities are constantly made the butt of jokes in mainstream comedy and television shows. Yet almost immediately after this statement of purpose, Hussain proceeds to imitate his mother’s ethnic voice, and her advice for him to take her goat curry. This is unsurprisingly met with uproarious laughter.

After three episodes of the show, Muslims and migrants have woefully been the punch line of most jokes. Of particular note are Hussein’s caricatures of ethnic people as explosive, unhinged, difficult personalities, who create social disharmony wherever they go. Whether it’s in the workplace, where a man with “Indian Tourette’s” breaks out into uncontrollable Bollywood-styled dancing (which is just offensive) or the “Prince of Mumbai” who tries speed dating and flips out, to name just two. These are general themes with Hussein’s ethnic characters, who far from challenging stereotypes, reinforce them.

This is not to say all the skits in the show have these problematic themes. There are some small exceptions. For example, Hussain’s sketch where he dresses up as non-white celebrities including Sachin Tendulkar or will.i.am to sign autographs is an unmasking of stereotypes. It makes fun of the absurdity of the dominant views in our society that assume migrant and ethnic people are homogenous, rather than distinct individuals.

This skit also shows that racist ideas are not held simply held by “white people”, and that members of other ethnic groupings are also vulnerable to making the same assumptions. Still, they leave the question of who is responsible up in the air. Is it the “bogan” backward ideas of working class people in the suburbs or a reflection of deeper systemic racism in our society that benefits those at the top?

Hussein’s confusion on this question means that the most controversial issues, like the question of people smuggling, is left in dangerous, ambiguous territory. The skit opens with a survey stating that a majority of Australians are opposed to people smugglers and believe they are evil people. The skit portrays a people smuggler who visits different storage companies attempting to unload a cargo of refugees from his truck. Yet at the end of the skit we are left wondering what the point is and waiting for any attempt to demystify an argument that has been the lynchpin of anti-refugee racism.

Waleed Aly, a columnist in The Age, has celebrated Legally Brown as an achievement, saying that it’s “not all one-way traffic” and Hussein’s character Uncle Sam, is dynamic (like the show), because “Everyone’s a target”. For Aly, Uncle Sam not only exposes ignorant views about Islam, but is “putting the radical, conspiratorial Muslims … back in the box”. Uncle Sam developed as a response to the racist anti-Muslim campaign to stop the Islamic school being built in Sydney’s Camden in 2008 and exposed the ideas of racist bigots and government fear-mongering equating all Muslims as terrorists.

But surely it’s obvious that racism is not directed at “everyone”? More importantly, the radical Islamism that Aly wants to put in a box is a response, albeit a flawed response, to fighting racism, whereas anti-Muslim racism is about maintaining Western and US interventions and occupations in the Middle East. Treating them as equivalents is a grave mistake.

Aly aside, the limitations of Hussain’s subversion are painfully displayed when Uncle Sam discusses the issue of same-sex marriage. In this skit the only thing that’s exposed is Uncle Sam’s own ignorance about same-sex marriage and transgender issues, rather than the government’s own bigotry and unwillingness to pass same-sex marriage. As a consequence what is reinforced are stereotypes about Islam and Muslims being reactionary on issues of gender and sexuality, the kind of ideas that have been the backbone of the virulent anti-Muslim ideology.

So if you’re going to watch Legally Brown set your sights low. It lacks either sharp political wit or clarity and, too often, wanders into the reinforcing racial stereotypes rather than challenging them.

It’s a comic recipe that will guarantee cheap laughs, but is inadequately short of offering relief or humour from racism in Australia today.