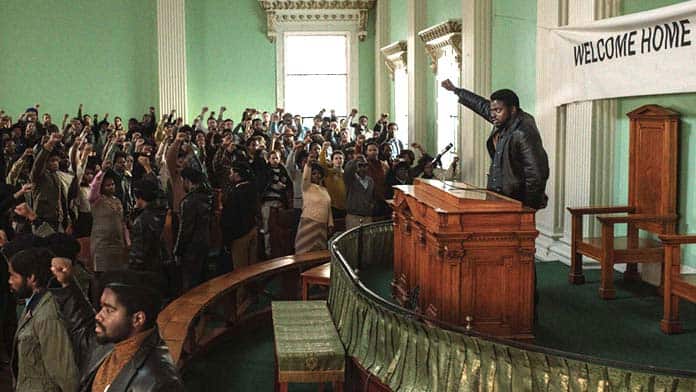 These are the insightful words of the Black Panther leader Fred Hampton, sampled at the start of this important new film. It narrates his attempts to build a multiracial working class revolutionary movement in the US, as well as how the FBI spied on him and then brutally assassinated him.

In the 1960s US society was in tumult, with massive anti-racist rebellions following the assassinations of both Malcolm X and Martin Luther King Jr in the space of just three years. The movement against the Vietnam War was snowballing, and student resistance on campuses was radicalising.

One of the biggest fears the FBI held was that a Black leader would emerge who could unite Black, brown and white workers, with broader left movements and that this could set the stage for a domestic revolution. The “Black Messiah” was the name they gave to such a leader, and they feared Fred Hampton would be the man to take on this role. They had launched an illegal domestic spying operation called COINTELPRO designed to stop this.

In the 1960s sections of the Black civil rights movement, which had begun as a movement in the Southern states for integration into US society, were radicalising into the Black power movement, with a much more wide-sweeping critique of the racist, capitalist society.

One question that came up was the role of white people in the struggle to end racism. Black separatist movements had emerged in the urban ghettos in the 1920s, influenced by the ideas of Marcus Garvey. He argued that Black liberation could not be achieved in white society and so called for a mass return of Black people to Africa.

Separatist politics was given a boost in 1960s and many Black rights organisations started restricting membership to only Blacks. Some organisations argued that including whites would blunt the militancy of their message. Others were influenced by third-worldist politics which meant they saw everyone in the mostly-white, rich world as oppressing everyone else in Asia, Africa and Latin America.

The Black Panthers emerged in this context as a revolutionary Marxist organisation geared towards the self-defence of Black people. They understood that capitalism created racism, poverty, war and everything else that plagued Black people in America. They also understood that the police and the army represented the interests of capitalists. One of their main activities early on was arming themselves and following police around when they were harassing other Black people, or as they called it “Pig Patrols”.

They were also oriented to community welfare, organising free meals and free education, healthcare and legal support for the Black communities.

These initiatives and the fact that they supported the mass rebellions in the Black ghettos of Northern US cities, when many others in the respectable civil rights organisations condemned them as violent riots, meant they found huge support among poor Black communities. For those looking for an alternative to “non-violence”, the Panthers’ militancy was appealing.

While many Panther members and some in the leadership held more separatist views, Fred Hampton was very clear that unity between all workers was necessary to build a movement that could overthrow the system.

This conviction drove his organising efforts, as the film displays. Initially, he was able to unite the rival Black gangs in his home city of Chicago, convincing them to turn their guns away from each other and towards the police.

Next, he helped broker the alliances that led to the formation of the Rainbow Coalition. This group was made up of the Panthers, the Latino working class revolutionary organisation called the Young Lords and the Young Patriots, a leftist group of white Southerners. They were later joined by the Students for Democratic Society, the American Indian Movement and some other socialist groups. The groups came together to campaign against poverty, corruption, police brutality and slum housing.

The FBI was extremely concerned about these developments and recruited infiltrators in the Panthers and other leftist organisations. “Judas” in the title refers to one of these infiltrators, William O’Neal, who gave information about Hampton’s location.

The police raided Hampton’s apartment, launching a volley of bullets without warning, killing him and one other Panther. They later claimed the Panthers fired first but the claims were discredited by the courts.

Unfortunately, the film spends too much time on William O’Neal and not enough on Hampton and detailing Hampton’s politics in more depth.

However, it is very good to see a mainstream film that portrays Hampton’s revolutionary Marxist politics and his commitment to multiracial working class unity against the capitalist system.

With police brutality and the declaration that Black Lives Matter still necessary today, a revival of this kind of politics are badly needed.

Judas and the Black Messiah, Directed by Shaka King, In selected cinemas now