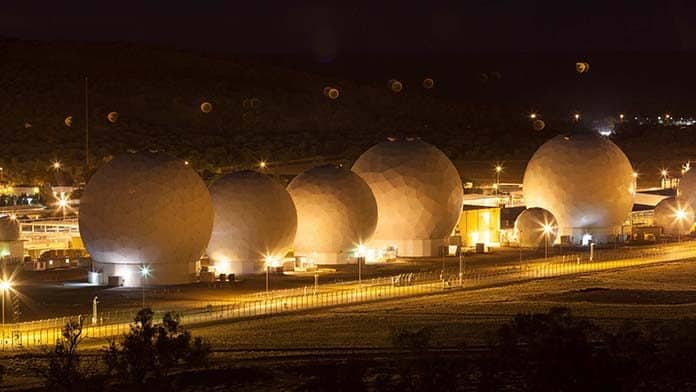 His new book Secret ranges widely, tracing the history of Australia’s spy agencies and the expansion of their powers under the “war on terror”, Australia’s relationship with the US, its role in US wars, and the history of the spy bases at Pine Gap and North West Cape. Much of this is told through recounting his own reporting on Australia’s state secrets for the now-defunct National Times and the Financial Review.

He savages Australia’s alliance with the US, showing how it feeds conflict and makes the world a more dangerous place—including for ordinary people in Australia.

In contrast to the rosy-eyed view of US power across most of the mainstream media, Toohey points out that, “the US repeatedly engages in illegal wars of aggression, breaks trade rules and abandons nuclear arms control treaties”. It is a rogue superpower that habitually unleashes armed might around the world, on a scale that far surpasses China, Russia or any of its rivals.

“A Congressional Research Service study found that the US used its armed forces overseas on 215 occasions from its foundation in 1798 to 2016”, Toohey writes. And far from creating a more peaceful world since the end of the Cold War, the US’s use of armed force has actually “stepped up greatly” since 1991, as it bombed or dispatched forces on 160 occasions.

Since the Second World War Australian governments have tied themselves to the US with the aim of securing Australia’s own domination of the south Pacific. Toohey mistakenly views this as a surrender of sovereignty to the US.

But he outlines how Australia has great strategic value as the host of US surveillance bases at Pine Gap and North West Cape. Toohey traces the history of secrecy and lies over US bases in Australia. For decades both Labor and Liberal governments told the public Pine Gap’s role was either for “space research” or monitoring Russian compliance with arms control treaties. Even the Whitlam government maintained this cover story, despite an election promise to tell the public their true purpose.

Whitlam kept mum after Defence Department Secretary Arthur Tange told him doing otherwise would jeopardise Australia’s relationship with the US. But Tange also withheld information from Whitlam, failing to tell him that the CIA, not the Pentagon, ran the base. This too was a lie designed to hide the base’s purpose.

Some on the left have long claimed CIA involvement in the downfall of the Whitlam government in 1975. Toohey thinks there probably were covert efforts against him, and re-examines the evidence. But he admits there is no clear proof of US interference, or that this played any decisive role in Whitlam’s dismissal.

Pine Gap began construction in 1967 as a receiving station for signals from US spy satellites. It receives an enormous range of electronic signals, from mobile phone to military communications, as part of the NSA’s surveillance program. Today it plays a key role in targeting drone strikes and missiles for the US military, and is of vital importance in every US war.

This was confirmed in files leaked by Edward Snowden stating its role included “support to US military combat operations”.

Despite the fiction of joint control by Australia, Toohey recounts how US congressional budget committees were told more about activity at the US bases than the Australian government. His report on plans to build a new ground station at North West Cape in 1977 appeared in the papers before Australian officials had received any notification.

The US bases made Australia a nuclear target during the Cold War, in particular North West Cape, which was used to dispatch orders to the US’s nuclear-armed submarines.

Australia’s military intelligence agency the Office of National Assessments told the government as much, and former Labor leader Kim Beazley admitted it publicly in 2016.

Toohey cites declassified US government papers that argue the use of Australian territory for US satellite bases, as well as potentially for hosting troops during wartime, are by far the most important elements of the Alliance to the US.

This role also implicates Australia in any potential US conflict with China—whether or not Australian troops are involved.

It means, “Australia has a critical role in the US efforts to increase economic and military pressure on China, and if that fails, in winning the ensuing war”.

Toohey himself does not favour abandoning the US alliance, but wants a more independent Australian approach. Yet he provides a wealth of evidence in support of ending it.

Secret is a welcome critical account of Australia’s military and security state. It covers enormous ground, which means some topics get only limited treatment, with a slant towards Toohey’s own exposes over the years.

But in sounding the warning about Australia’s ties to the US military agenda, he has done us all a service.