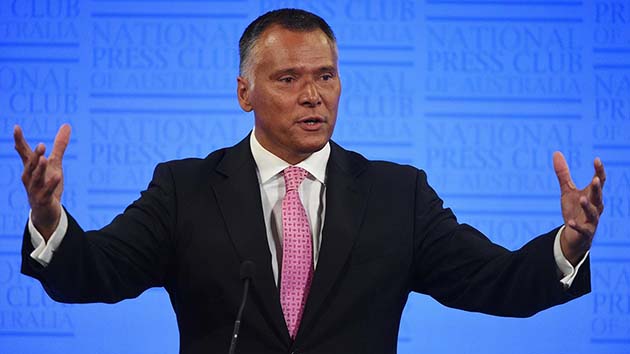 That Grant is talking to “Australia”, the state founded by invasion, is a contradiction that he never resolves. He desperately wants to find a place in Australia.

Many readers will be shocked at the racism and disadvantage of Grant’s childhood. And shocked, too, as Grant reveals the murderous racism of European invasion that is embedded in the history of his country—the “Poison Waterhole Creek” on the way to his parents’ place.

Those casual markers of Australia’s black history—Skull Creek, Slaughterhouse Gully—scar the highways, marking places that remain deeply etched into Aboriginal memories and lives. They are stark reminders of the bloody dispossession that underpins the contemporary injustice and the gaps the politicians pretend they want to close—in jobs, health, education, imprisonment, life span.

There are some odd, jarring references in the book. Grant mentions “taking pleasure” at seeing Australia beaten on the sporting field and says he cheered on, “the All Blacks or Springboks.” The Springboks?! The sporting ambassadors of apartheid?

It is clear that the booing of Adam Goodes at AFL matches in the winter of 2015 had a profound impact on Grant. Grant says, “I love Australia and I must love its people…My country: Australia.” Grant’s patriotic sentiments would easily fit with those of John Howard.

That is why the Adam Goodes incident was so shocking to Stan Grant. “Here was everything I had thought—hoped—we had left behind.” In that incident, Grant’s Australia turned on him.

Grant admits that he and Goodes, “…sometimes sit uneasily too among our own people.” A few pages later, Grant says that Goodes described himself as “an assimilated man.” Then perhaps the punchline of the book, “If Adam Goodes can be laid so low, then we are all at risk.”

Grant recounts the 1993 incident when, in response to racial taunts, another AFL footballer, Nicky Winmar, lifted his shirt to proudly point to his black skin, and the 1995 protest march from Melbourne to Canberra by another AFL player, Michael Long: “Adam Goodes may have thought those battles had been fought and won. He was wrong.”

Since Grant’s powerful speech in 2015 and the publication of this book, he has been elevated to Indigenous celebrity status. He was happy to be appointed to the [Constitutional] Referendum Council, by none other than Malcolm Turnbull and the Opposition Leader. In April, he wrote for SBS, “In 1901 our voices were not heard. I am humbled that in 2016 a son of the Wiradjuri and Kamilaroi will be heard.” But whose voice is really being represented?

The majority of Indigenous Australia reject the official Constitutional Recognise campaign. At a suicide prevention conference, in May, an Indigenous academic and Treaty supporter challenged Grant’s position saying, “Why don’t we want it [constitutional recognition]? … Because we don’t want to be recognised by the perpetrator of the violence.” Grant defended his Council position, but replied that having constitutional recognition did not stop the possibility of a treaty.

In June this year, following ALP leader Bill Shorten’s indication that he was open to the idea of a Treaty, Stan Grant followed suit in The Guardian, saying that “a treaty has a greater chance of success now than in the 1980s.” Although Grant is silent on what “things of substance” would be covered in any Treaty.

In the book, he is also ambivalent about “community closures”. He says the remote communities do “present challenges…they are far from hospitals, shops and schools”—as if services can’t be provided. He is brought up short, when an old Aboriginal man at the Grama festival bangs the table and says, “We will not be moved.”

In March 2015 he told Sky News, “Sometimes people fall prey to this idea that ‘we need to keep people in remote communities, that’s where the real blackfellas are and that makes me feel better about my identity.’ That’s fine for someone like me living in a city with the opportunities I’ve had. It’s not so fine for the kid who’s growing up there to make me feel stronger about who I am and my identity”.

Grant does spell out some history of government neglect and failure—despite Rudd’s apology to the Stolen Generations, “the number of indigenous children being removed has increased 400 per cent”; despite the Royal Commission into Black Deaths in Custody, Indigenous incarceration has increased 100 per cent.

He writes, “We die younger, we go blind, babies are born deaf, our communities are in crisis,” but he never seems to grasp that the neglect and inequality is built into his country, Australia.

Grant doesn’t offer any solutions—the fact that he can favourably quote “Professor Marcia Langton”—who he admits supported Howard’s Intervention and “sought alliances with big business and government”—is an indication of how far he is from finding one.

Racism not only has to be “recognised”, it has to be fought.

He ironically quotes the national anthem, “Where is our wealth for toil?” But that wealth will have to be taken back from those who are still stealing it.

Talking to My Country
By Stan Grant
HarperCollins $29.99