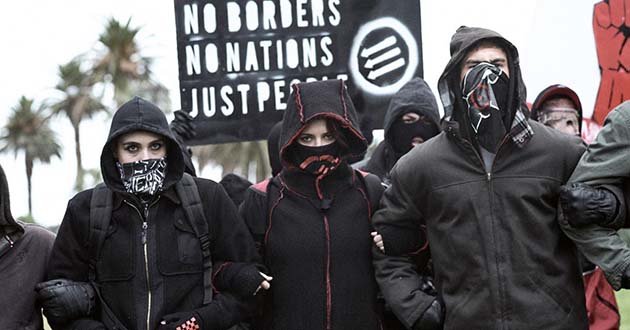 There is a lot wrong with the new adaptation of Romper Stomper, but the worst part is its fanciful and dangerous representation of anti-fascists, and Muslim and African youths.

The six part series is partly a story about contemporary Australian fascism and its anti-Muslim obsession. A new generation of Nazis are connected to the original set of thugs from the 1992 film through a rather contrived plot, and some returning cast members.

At the centre of the film is a group of Nazis, Patriot Blue, quite obviously modelled on the real life United Patriots Front, and, as the promotional material explains, their conflict with “their anti-fascist counterparts”, Antifash. The show deliberately equates the violence of Nazis with those who resist them.

This is especially troublesome because the series wants to be realistic, and it uses real world events as motors for the plot. The first scene centres on a protest by Patriot Blue outside a Halal food festival, mirroring a real life protest in Sydney in 2016 (the show is set in Melbourne). But it is Patriot Blue who end up viciously beaten—by Antifash. Muslims end up injured not by Nazis but by the melee that ensues between left and right: a very unsubtle metaphor.

Whatever the strategic nous of punching Nazis, nothing remotely like this has happened during the actual anti-racist counter-rallies against the far right in Australia that the show aims to portray. A few episodes later, Antifash set upon the funeral of the former leader of Patriot Blue, Blake, armed with weapons. This too is miles from reality.

At another point, a group of young Africans are harassed by the Nazis. A few scenes later they have kidnapped one of the Nazis and are torturing him with a Stanley knife in the back of a van. While the Australian media hypes up a pretend South Sudanese crime wave in Melbourne, this portrayal is downright irresponsible. It also seems to have nothing to do with the plot.

In another scene, a young Muslim boxer gets into a fight in a car park that leaves his white opponent nearly dead. This spurs Patriot Blue to wild violence. The implication is that the hatred is “spiralling”; and in some way, the young Muslims share the blame.

Sometimes the series gets its realism right. David Wenham is great as Jago Zorick, an Andrew Bolt-like TV shock jock whose heroes are his friends the fascist brutes. He tricks outspoken young Muslim Laila into appearing on his show alongside Blake, and then demands she apologise on behalf of all Muslims for all acts of terror, a racist public shaming that recalls the experience of people like Yassmin Abdel-Magied. But then Laila just becomes a pawn, played by both sides.

Resistance to Nazism and racism is portrayed as just as problematic and morally dubious as those who idolise Hitler.

Even worse, perhaps, is that this isn’t really a TV show about racism or Nazis. Romper Stomper uses the clash between fascists and anti-fascists as background in a hackneyed psychological story about a rising young Nazi, Kane, whose primary motive in winning Patriot Blue’s leadership seems to be hatred for his mother. The characterisations are painfully two-dimensional, and the dialogue is so unnatural at times that serious scenes end up verging on comical.

When the state and politicians play a role—there is a nonsensical plot that revolves around an Immigration bill and a crossbencher quite obviously modelled on Nick Xenophon—it is as if they are just being strung along by the contest between far left and far right.

Racism comes from the top

The small fascist groups in Australia are dangerous, but whatever their fantasies, they are not leading the charge. The sewers that Australian Nazis swim in have been constructed by years of racist mainstream policy and discourse.

Wave after wave of anti-terror legislation alongside cultivated panics about “death cults” have created an environment where extreme anti-Muslim hate is given oxygen, and where the far right has more confidence to actively attack Muslims and other minorities. The Islamophobia Register has documented hundreds of hate crimes; their stats show that 70 per cent of victims are women and 30 per cent of attacks have happened in front of children.
R
The original film was rightly criticised for its romanticisation of Nazis. The TV show gives the oppressed groups and anti-fascists more airtime, but it does so with sparing empathy and context. Perhaps this is no accident. Speaking to The Australian, director Geoffrey Wright echoed the racist concerns of his main characters: “We are at a point in the West, amid significant waves of immigration, where we are asking: what do we stand for? What do we want? And how do groups contribute to the West, to our society in a meaningful way?”

One good thing about Romper Stomper is the paywall—it’s only available on Stan. Hopefully that means less people watching it.