The Reluctant Fundamentalist
Directed by Mira Nair
Coming to DVD

Mira Nair’s film The Reluctant Fundamentalist is particularly outrageous viewing in light of the racist backlash to the Woolwich murder. Nair’s protagonist is the ultimate liberal depiction of the “good Muslim”—one who remains loyal to the US Empire, however poorly it treats him. The film is not a complex exploration of racism, as some critics have said. It is an apology for the imperialist actions of the US in the Middle East.

As Manola Dargis said in The New York Times, “Comparing books to the movies made of them isn’t always necessary or productive, but it’s instructive when the results are as thuddingly crude as Mira Nair’s take on The Reluctant Fundamentalist.”

Nair’s adaptation of Mohsin Hamid’s 2007 novel of the same name destroys everything that was worthy in the book. Where the book’s protagonist is pushed into action and opposition to US foreign policy by his experiences of racism, the film’s protagonist chooses to actively support the US despite the fact that it literally destroys everything he has.

This conservative interpretation is particularly outrageous given all that has occurred in the five years between the publishing of the book and the release of the film. As the Woolwich murderers themselves pointed out, the brutal ongoing occupation of Afghanistan has further fuelled opposition to the US and its allies. That is why the influence of the Taliban inside Afghanistan has grown. Similarly, the drone attacks on Pakistan are rightly encouraging opposition to the US war machine.

The film is structured around the abduction of an American academic, a crime in which the main protagonist Changez is a key suspect. Bobby, an American journalist in the pay of the CIA, is sent into a tearoom in central Lahore to interrogate Changez and gather intelligence.

This thriller plotline is an invention of the film. In Hamid’s book the American antagonist has no name, no stated profession, no dialogue. The reader is placed in the position of the American, with Hamid mocking the reader’s assumption that a young Muslim man deeply critical of US foreign policy in the post-9/11 age must be a terrorist motivated by religious fervour.

Bobby extracts Changez’s life story across the table. Changez charts his life, from growing up in a ruling class Pakistani family to excelling at an Ivy League college in the US. Riz Ahmed as Changez, details his hunger for the high life in the US as he works his way into the financial firm Underwood Samson on Wall Street. The not-so-subtly named firm represents everything that is lecherous in American capitalism, making ridiculous profits advising firms in developing countries on how to downsize.

Against this backdrop Changez falls in love with the beautiful “free spirit” Erica (again, the symbolism of the name is not particularly subtle), who reflects the idealistic arm of the American dream that he is chasing. Changez is enamoured with both the drive of Underwood Samson and the mysterious Erica.

This all changes however as we see Changez smiling whilst he watches the Twin Towers fall on television from a motel room in Manilla. 9/11 catalyses Changez’s shift from a young man wedded to the empire’s agenda to a young man questioning his place in the American dream. 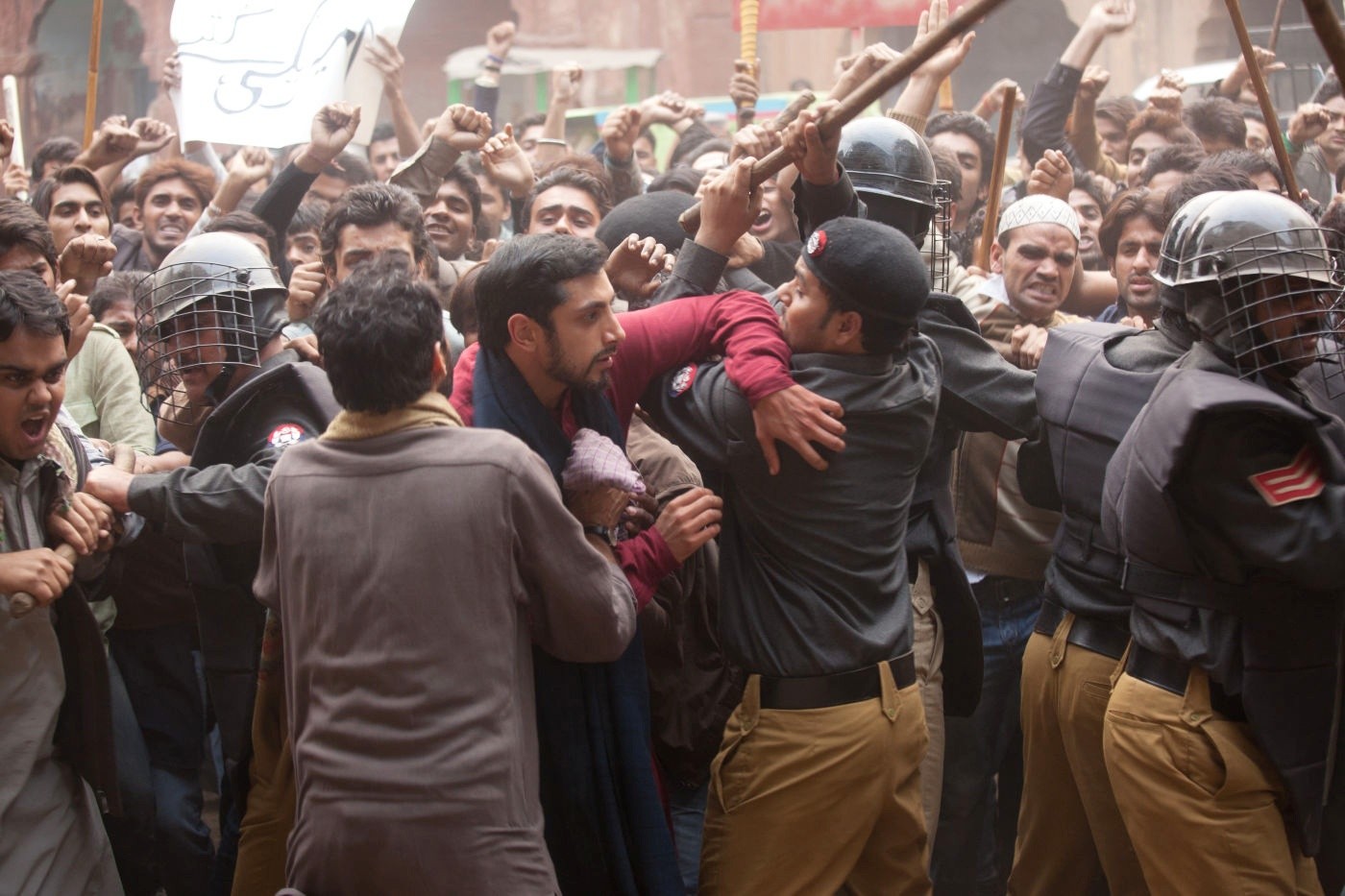 Re-entering the US in the days after 9/11 Changez is strip-searched and detained in separate instances. The pain is palpable and believable—a common experience for a young Muslim in America.

Hamid’s novel relies on ambiguity and complexity, encouraging the reader to examine their own prejudices and assumptions about what it means for a young Muslim man to be critical of America.

The book relies on the knowledge that America’s foreign policy creates enemies.

In contrast, Nair’s film sympathises with Changez’s critiques of the extremes of the US, but actively discourages any resistance to their activities. Nair suggests that whilst the actions of the US may be troubling at times, they are the lesser of two evils. Changez struggles, but he ultimately chooses to betray the forces of resistance. He chooses to aide the US.

The film version of The Reluctant Fundamentalist apologises not only for the brutal occupations in the Middle East but also for the racism these wars breed within the US. At a time when anti-Muslim forces are galvanising and activating across Europe, it is a dangerous message. The film would have done well to return to the message of the book—that racism, war and occupation will always breed resistance.