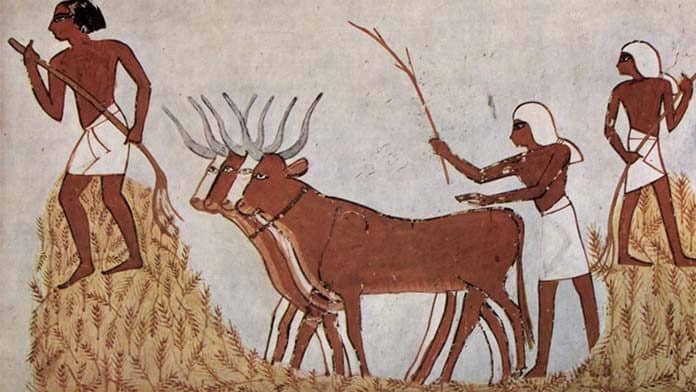 The emergence of agriculture and the first states were among the most dramatic changes in human history.

Why these changes took place, leading to a revolution in human existence through new technologies such as domesticated grains and livestock, writing, metal-working–and class–continues to be debated.

James C. Scott has produced an accessible and thought provoking account of how the first states arose and functioned. He aims to bring together the, “astonishing advances in our understanding over the past few decades”, of this process that, he says, “have served to radically revise or totally reverse what we thought we knew about the first ‘civilisations’”.

In particular, he writes, the rise of agriculture as a story of the steady “progress of civilisation” has been called into question. Agriculture actually led to worse health and nutritional outcomes for the first farmers, and involved far greater and more intense labour than previously.

The survival of permanent agricultural settlements was also far more precarious than is often realised. The failure of the annual harvest could bring disaster.

Agriculture also brought the first epidemics. Prior to the emergence of settled communities, there were few hunter gatherer bands large enough to sustain diseases and pass them on to other groups. “Diseases with which we are now familiar—measles, mumps, diphtheria, and other community acquired infections”, he writes, “appeared for the first time in early states”.

As a result early agricultural settlements suffered frequent collapse. Most dynasties in the first city states in Mesopotamia lasted just a few generations, and periods of “dark age” like that in Greece following the collapse of the Mycenaean culture, were common.

All this meant that the development of states was a long, protracted process. The first states developed between the Tigris and Euphrates rivers in Mesopotamia, centred on modern day Iraq and Syria, “no earlier than about 6000 years ago, several millennia after the first evidence of agriculture and sedentism in the region”, he explains.

All this poses a question. Given the difficulties, why did agriculture develop at all?

For around 95 per cent of the time anatomically modern humans have walked the planet, permanently settled societies were rare. Humans lived in hunter gatherer or foraging groups which moved according to food supplies, living off the land. These were egalitarian societies in which class divisions were unknown. We know this from observation of foraging groups who continue to exist to the present day, or until European colonisation in the last few centuries.

Their way of life reflected how they went about acquiring the food and shelter they needed to survive. Humans lived in small groups of only 30 to 40 people, with each member reliant on the whole group to survive.

Friedrich Engels called this “primitive communism”, since these societies were based on egalitarianism and co-operation. Their survival for hundreds of thousands of years is a lesson for those who claim human nature makes us naturally selfish and competitive.

It was between 8000 and 10,000 years ago, writes Scott, that both the domestication of the “founder crops” for agriculture and domesticated cattle, sheep, pigs and goats first appeared.

There were two dramatic shifts. The first was the development of larger communities that settled permanently in one spot, in order to take advantage of particularly rich food resources. One example is the Natufian culture that developed in the Middle East from 14,500 years ago.

Such settled communities became possible as the climate improved at the end of the last glacial period, when foods like antelope and grains became more widespread.

These societies still engaged in hunting and foraging from the surrounding environment, but began using semi-agricultural techniques.

For Scott, why such settled communities endured is a puzzle, given the frequent collapse they seem to have suffered.

But the main reason is surely the ease of living off the rich resources around wetlands or fields of wild grains, which reduced the uncertainties in gathering food. Scott himself cites the example of wild wheat, which still exists in modern Turkey, where, “as Jack Harlan famously showed, one could gather enough grain with a flint sickle in three weeks to feed a family for a year”.

And as British Marxist Chris Harman pointed out, a return to a foraging lifestyle after hundreds of years living in large towns of up to 5000 people would not have been easy:

“Their communities were too large for them to return to a way of life based on small, wandering bands. That would involve a complete break with an established way of life, massive social disruption, the learning (or relearning) of survival techniques—and probably starvation on a wide scale at first.”

One possible response to any crisis in food supply was intensifying the use of agricultural techniques.

There is clear evidence that such strains did develop. A series of climatic changes disrupted the new sedentary communities in the Middle East during the period that agriculture was developing.

And the move to fully fledged agriculture after three or four millennia of settled life also came when, Scott writes, “There was growing population pressure; sedentary hunters and fishers found it harder to move and were impelled to extract more, at a higher cost in labour, from their surroundings, and most large game was in decline or gone.”

However Scott’s interest in states, the focus of his own previous academic work, leads him to skip over another crucial development: the emergence of class.

It was agriculture that allowed the first class divisions. Until then societies did not produce enough surplus for them to develop.

Exactly how this happened may never be clear. But studies of still existing agricultural societies in places like Papua New Guinea and the Americas show how emerging elites may have operated. These societies began developing class divisions but without fully developed states.

It is likely that “leaders” emerged who were able to convince their communities to put them in charge of surplus production. It would have made sense to keep stores of food to cope with crop failures caused by disease or climate fluctuations.

But these “leaders” also used their position to control the surplus, and keep part of it for themselves.

Over time some became hereditary rulers who were able to transfer power and wealth in the form of private property to the next generation.

The development of class had far-reaching consequences. For the first time, the mass of the population was exploited in the interests of a minority of society. Some of the exploited were even turned into slaves, with masters who had the power of life or death over them.

Without class, the first states would never have emerged. What defined the early state was a bureaucratic apparatus of officials responsible for collecting the surplus production from its subjects and keeping it in the possession of the new ruling class–using force if necessary.

One of Scott’s main interests is discussing why agriculture in some areas allowed the construction of states, such as Mesopotamia, Egypt and China. Grains, he argues, were a perfect crop for the measurement and taxation which a state required, since the whole crop matures at the same time, is difficult to hide and easy to divide up and transport.

His emphasis is on how difficult it was for early states to survive, in the face of crop failures, disease, environmental degradation and war.

Scott’s dislike of the state leads him to emphasise its use of coercion against its new subjects. He puts particular stress on the difficulties the new rulers had in maintaining a labour force willing to endure the toil of agricultural labour and the theft of part of their crop in taxes.

He is not the only one to suggest developing agriculture might have been humanity’s greatest mistake. Human foragers, even those in the more marginal environments that remained for study in the last few centuries, had to spend no more than a few hours each day gathering food. One academic has described them as “the original affluent societies”. And they were completely without the oppression of sexism, homophobia or class that “civilised” societies have developed.

But the first states may also have been a response to climate change and food stress, Scott notes, which threatened the ability of early farmers to survive. This helps explain why some communities acquiesced to the construction of states by a new ruling class.

And as Scott acknowledges, fully-fledged agricultural production revolutionised social organisation and human life. It allowed a ruling class and substantial layers of officials to free themselves from the direct need to engage in food production. This promoted advances in technology including improved techniques of food production.

In the face of shortages, allowing an elite the time to supervise production and work to improve crop yields would have made sense to early farming communities. But once a new ruling class was entrenched, it also had the power of force in its hands.

Over time agriculture produced enormous population growth and allowed states to field substantial armies. It also stimulated widespread trade, including with so-called “barbarian” groups who did not practice agriculture. Scott argues that the possibility of raiding settled agricultural groups, and making off with their stores of grain, livestock and accumulated wealth, led to a “golden age” for barbarian, non-state peoples.

But by drawing them into networks of trade and warfare, the new states also began to reshape the way non-state peoples made their living, eventually incorporating many of them into settled life.

Scott is right to stress the oppression and suffering that the development of agriculture and the state produced for humanity. At the same time, they have allowed phenomenal growth in wealth, technology and human productive capacities.

Despite his recognition of the drawbacks of state-centred societies, Scott believes we are stuck with them.

Socialists disagree. The level of surplus production that exists in today’s capitalist societies makes a truly democratic society free of state and class oppression possible. Class struggles against the state were surely one reason it took millennia for ruling classes to cement their control. And class struggle today holds the hope of toppling them for good.

Against the grain: A deep history of the earliest states
By James C. Scott
Yale University Press